In 2014, Ford Motor Company re-invented its most successful product, the F-150 pickup truck, part of its F-Series truck which had been the best-selling vehicle in the United States for more than three decades.[1] Ford sought to make the F-150 lighter, which would increase its fuel economy and reduce greenhouse gas (GHG) emissions. This bold change was spurred on by new fuel economy targets established by U.S. regulators in 2010 in response to the growing threat from climate change. Making the F-150 lighter is one of several strategies Ford has implemented in the wake of this regulation. Continued execution on these strategies will be required for Ford to successfully meet the new targets and develop a cleaner, more environmentally friendly fleet of vehicles.

In 1975, the U.S. Congress established Corporate Average Fuel Economy (CAFE) standards, which set the average fuel economy, as measured in miles per gallon (mpg), that U.S. automakers must achieve across their fleets of new vehicles (cars and light-duty trucks).[2] For decades, the CAFE standards remained static and average fuel economy in the U.S. showed only modest improvement (Exhibit 1).[3]

As the auto industry has grown in the decades since CAFE was established, so have resulting GHG emissions. To reduce the industry’s impact on climate change, fuel economy standards were revamped in 2010, with regulators setting an ambitious target for U.S. automakers to meet: average fleet-wide new vehicle mpg of 54.5 in 2025.[4] The 2025 target is nearly double the 27.5 mpg that was required for new cars under the CAFE standards in place prior to the new regulation.

To meet these new emissions standards, Ford has implemented a multi-pronged strategy. First, it is re-designing its vehicles to be lighter and, thus, consume less fuel. “Light-weighting” requires both material science innovation and significant investment in production capabilities. The pay-off can be large, with a 10% weight reduction resulting in a potential fuel economy improvement of 3% – 4%.[5] Ford has boldly pursued this strategy, investing more than $1 billion to re-tool production of its top-selling vehicle, the F-150 pickup truck, changing its body from steel to lighter-weight aluminum[6] and reducing overall vehicle weight by 700 pounds.[7] The company continues to pursue light-weight material innovation, partnering with suppliers to develop more advanced aluminum alloys, carbon-fiber and other alternatives for use in future vehicle applications.[8]

Overall, Ford has taken significant strides to position itself to meet the 2025 fleet-wide fuel economy target. However, there are additional steps Ford can take over the short and medium term to supplement its existing strategy. First, it should take a hard look at its portfolio of vehicles. If the company wants to be a leader in building a cleaner fleet, it should consider discontinuing production of some larger, less fuel-efficient models. While the F-series trucks are critically important to Ford’s survival, there may be an opportunity to rationalize its SUV portfolio. The company has 5 consumer SUV models (Escape, Edge, Flex, Explorer, Expedition), which collectively represented 28% of 2016 sales (Exhibit 2).[1] 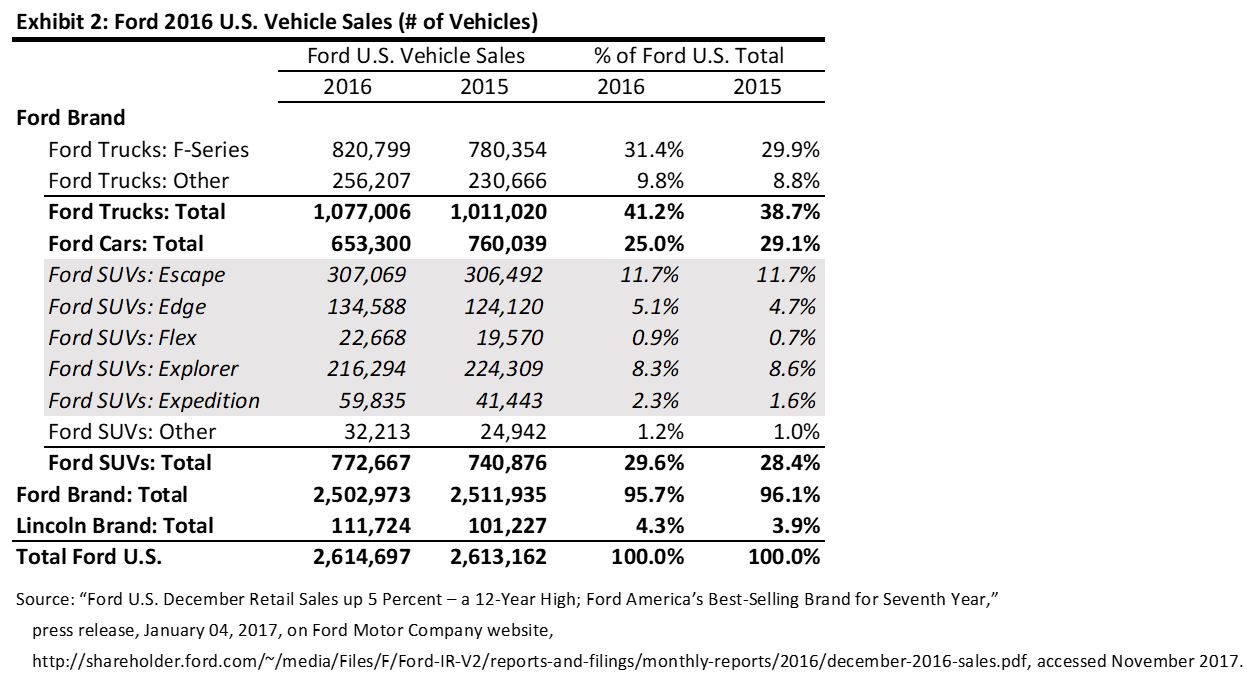 Going from five models down to one or two would allow management to better focus investments in fuel-efficiency in the remaining models. Ford should also accelerate its light-weighting program across other vehicle models by leveraging the capabilities and know-how already acquired from transitioning the F-150 to aluminum. Lastly, the company should consider developing strategic partnerships within the industry to accelerate its hybrid and electric vehicle efforts. A JV with another U.S. auto manufacturer may be an attractive way to achieve synergies and scale benefits which would allow both companies to move up the electric curve faster, getting them closer to the fleet-wide 2025 mpg targets.

Several external factors may also have an impact. The current U.S. administration is reviewing the emissions standards adopted in 2010, and there exists the potential that these targets are rolled back. Such a change in regulation may impact Ford’s strategy given the large investments required to achieve these mpg targets. It is also an open question what role California state regulations will play if its 2025 targets remain at elevated levels irrespective of the federal standards. Finally, if oil prices remain low, will consumers be incentivized to buy cleaner vehicle technology when improved fuel economy has less of a financial benefit? Each of these variables may impact the pace of fuel economy improvement over the next decade.

Too warm for the fleece: Patagonia’s quest for relevance amidst climate change

6 thoughts on “Ford: Building a Cleaner Fleet of Vehicles”