In the space industry, satellite operators have no appetite for risk. The immense capital requirements necessary to purchase, launch and operate a satellite require virtual certainty that the spacecraft will perform to all specifications over its lifetime. Established satellite manufacturers like Boeing typically cite flight heritage, the record of successful in-space performance for a particular satellite bus*, sub-system or component, as proof of a product’s reliability. As Boeing invests more heavily in additive manufacturing for its spacecraft production lines, how will they reassure customers that 3D-printed components match the reliability standards that traditional manufacturing techniques dependably deliver?

Boeing is clearly invested in making additive manufacturing a staple in their engineering and production processes. More than 60,000 3D-printed parts fly on Boeing space, commercial and defense products and the company recently made its fourth investment in a 3D-printing startup in 2018 alone. [1] Boeing sees immense potential in additive manufacturing for their satellite division. Additive manufacturing allows for the development of more efficient mechanical designs (Figure 1), while reducing total piece parts and part weight, a valuable benefit for customers who pay launch providers like SpaceX roughly $3,000 per kilogram of launch mass** just to get their satellite into orbit. [2][3] The promise of cost reductions in the future is also attractive for Boeing. Considering the $85 million price tag for Boeing’s flagship satellite bus [4], even incremental efficiencies in their manufacturing processes can yield substantial cost savings. 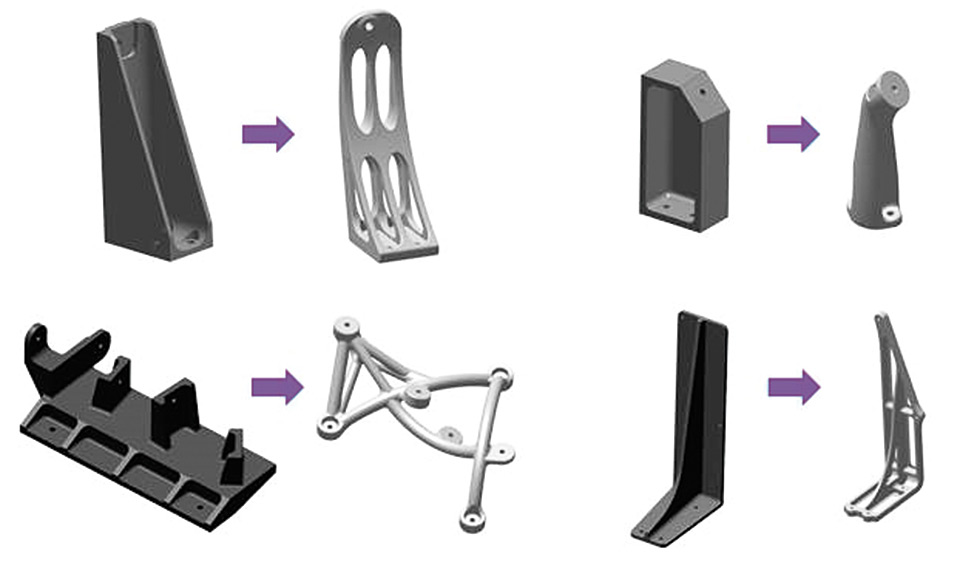 Yet, the absence of flight heritage for 3D-printed components remains a core issue for Boeing. Customers may be willing to absorb additional costs in exchange for better performance or lower launch mass, but virtually all of Boeing’s current customer base, which includes civil and military departments of the United States government, refuse to accept additional reliability risk. Testing for space-bound products is difficult enough as we can only approximate the harsh conditions of space (and cannot simulate microgravity), and as accurate testing procedures for 3D-printed parts are still being developed, positive performance in tests does not guarantee a part will perform well in service. [5] To make matters worse, there are only 10-20 orders for large satellites annually. Boeing will need years before they understand if their ground tests accurately predict in-space performance for 3D-printed components and decades before they prove definitively that these parts can endure the 15-year minimum lifetimes they promise customers. [6]

Although not explicitly stated, part of Boeing’s rationale for its recent acquisition of Millennium Space Systems, a leading manufacturer of small satellite (“smallsat”) platforms***, was likely to access a market with much higher order volume and more risk-tolerant customers. Access to this customer base will speed Boeing’s strategy to prove additive manufacturing techniques for satellite components. Higher order volumes mean more frequent launches, which will let Boeing more quickly collect data on how their 3D-printed components fare in space. Having a wealth of flight heritage on smallsat components will certainly help convince Boeing’s large satellite customers of the viability of 3D-printed parts. With analysts predicting demand for thousands of smallsats over the next decade, Boeing is uniquely positioned to build flight heritage for 3D-printed components, while accelerating their progression down the cost learning curve. [7]

However, smallsat customers will be resistant to increased costs, a risk for current additive manufacturing processes. Although these customers have a greater appetite for reliability risk, they also have much tighter budgets. Boeing will need to ensure that this customer base can offset any increased costs with savings on launch costs precipitated by lower part weights (Figure 2). Additionally, Boeing may need to offer non-traditional payment schemes that defer some of the cost until post-launch, when satellite operators begin to generate revenue from their satellites by providing services.

Boeing, one of the world’s prime satellite manufacturers, is leading the charge in additive manufacturing applications in the space industry. As they build flight heritage for 3D-printed components and lower their costs through larger order volumes and learning efficiencies over time, they will develop a unique competitive advantage by offering lighter, more capable systems that meet (or exceed) the reliability standards their customers demand. However, until at least one satellite with 3D-printed parts reaches the end of its useful life with no degradation of performance, Boeing can only hypothesize the longevity of components made through additive manufacturing.

What will Boeing do should a component break and lead to partial or total satellite failure? How is Boeing preparing themselves and their customers against such a possibility?

* A satellite bus is a general model on which multiple-production satellite spacecraft are often based.

** Launch mass it the total mass of a spacecraft loaded onto a launch vehicle (including any propellant).

*** Small satellites are satellite platforms with a mass less than 500 kg.

Spotify is better at picking your music than you are, but will they always be the best?

3D Printing the Future of Rail at Deutsche Bahn

3 thoughts on “For Boeing, not even the sky is the limit for 3D printing.”