Looking to save some time during a hectic day? Too cold to drive to the gas station? Is spending 5 extra minutes with the children worth more than $3 to have fuel delivered to you?

Well, then Filld is the answer for you. Riding on the wave of on-demand consumerism, Filld brings the fuel pump to the consumer. 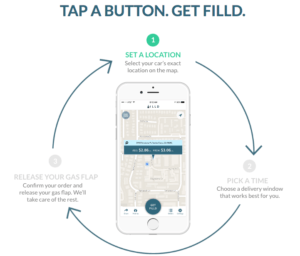 Filld uses mobile phone application technology. The Filld app is available for download for iOS and Android users. After setting up a profile on the app, consumers can order gas by placing a pin of the exact location of the car on the map. Users then enter a window of requested time for delivery, and unlock the gas cap. A truck will then be dispatched to the specified location at the specified time and fill up the car with gas. Essentially, car owners can have their car filled while they have their breakfast at home, shopping at the grocery store, or at work.

Payments are made automatically through credit cards, where customers are charged the average gas price of the nearest gas stations in the area, plus roughly a $3 to $5 surcharge, based on the length of the delivery window specified.1 Electronic receipts are also transmitted to the customers.

Founded in Palo Alto in January 2015, Filld raised $3.25 million in seed funding from Lightspeed Venture Partners, Javelin Venture Partners and other independent angel investors.2 It owns a fleet of trucks and only serves the area between San Francisco and San Jose, but plans to expand to other cities.3

Filld purchases gas from wholesalers, similar to where gas stations source from.4 It then uses a fleet of Ford 250 DOT-certified trucks, each equipped with several 100-gallon aluminum tanks, spill containment kits, fire extinguishers and calibrated metering system, to reach the customers. Its drivers are HAZMAT-trained and TSA-certified.5 As it does not own brick-and-mortar stations, Filld does not require as much initial capital expenditure.

Not much information in terms of revenues is available as Filld is a recently-founded private company. However, Chris Aubuchon, CEO and co-founder of Filled, in an interview with Bloomberg in May 2016, revealed having “thousands of customers in Silicon Valley”.6 In October 2016, Filld announced that it was working with Bentley Motors to give Bentley automobiles the ability to automatically order gas whenever the tank is low.7

Several challenges exist for Filld, with the most pertinent being regulatory issues, competition and the problems of scaling to more customers.

As with the case of start-ups like Filld and Uber, innovation tends to be ahead of regulations. The legality of the business is unclear, because the existing regulations do not really cover the kind of business that Filld does. While Lt. Jonathan Baxter, spokesperson for the San Francisco Fire Department claimed that Filld’s business violates the code and should not be permitted, Aubuchon insisted that Filld fully complies with the fire code. He adds, “You can never ask for permission because no one will give it” and “if it was illegal, they would have and should have told us many months ago”8 The fire department is currently drafting a code to cover the service provided by Filld.9 Adding to this complexity is that different cities have its own fire codes, posing an additional challenge for Filld in scaling its business to other locations.

Filld faces competition from other start-ups with the same business model, such as BoosterFuels, Purple, WeFuel and Yoshi. With such competition and low barrier to entry, will Filld survive if it starts engaging in a price war with its competitors? It is imperative for Filld to differentiate itself and be more efficient. Filld needs to invest in analytics to know where to place its trucks, when to place them, and how many it should have in order to reduce the amount of travelling time and idle time, and thereby increasing utilization and improving efficiency. It should also consider other value-adding services that it can provide to its customers in terms of greater convenience or better service, such as car cleaning.

For Filld customers, the convenience offered comes at the cost of not being able to specify the fuel type and brand. Some customers may be loyal to certain brands, while others may require specific fuel grade for their cars. My guess is that Filld is not sourcing premium fuel from Chevron, Exxon or Shell wholesalers, but instead midgrade fuel from cheaper and lesser known brands. It is unlikely that Filld is willing to offer specific fuel brands and grades to customers, as it requires an investment in segregating fuel tanks and could be disruptive to its operations.

Given the challenges above, can Filld successfully maneuver and overcome the obstacles to scaling? Will its business prosper or evaporate?

Netflix and Chillin’ in the Mile High Club