A market worth disrupting

In 2014, the global pharmaceutical market was estimated at $1.0 trillion and forecasted to grow to $1.3 trillion by 2018[1]. The market for counterfeit drugs is estimated to be $75bn[2], so not an inconsequential percentage of a very large market. Deaths that arise as a result of patients taking fake drugs is the biggest negative effect of counterfeit drugs. Counterfeit drugs are more rampant in developing countries where regulation is not as robust. According to a 2005 World Bank report, for many people in poor countries with weak regulatory systems, the likelihood that they are buying fake or ineffective drugs can be as high as 50%[3]. The number of incidences appear to be on the rise and is also becoming more rampant in developed countries as the internet has connected more buyers and sellers[4]. In fact, the world health organization estimated that over half the internet medicines sold in 2008 were counterfeit[5].

The global market for pharmaceuticals is incredibly intricate and comprises several entities in the supply chain. This makes it particularly susceptible for bad actors to insert themselves at different points in the chain[6]. I would argue that there are many other points in the supply chain, beyond what the arrows indicate in figure 1, where counterfeit drugs could be inserted. 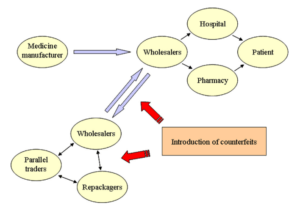 Enter Sproxil, Inc., a company founded in 2009 with the aim of “empowering consumers to help combat drug counterfeiting with a simple text message[7].” Sproxil empowers consumers by reducing the middlemen in the supply chain and giving them direct access to the manufacturer. It does this by using the cell phone which is accessible my millions of people, particularly in developing countries where the need is greatest. Sproxil developed a Mobile Product Authentication (MPA) technology that can easily and effectively identify fake drugs before consumers even leave the pharmacy.

Sproxil has partnered with large pharmaceutical companies like Novartis and Merck. In Nigeria, Sproxil partnered with BIOFEM Pharmaceuticals Ltd., an agent for Merck. In Nigeria, despite an overall increase in market share, sales through BIOFEM were falling as Illegal operations were leveraging BIOFEM’s brand name and reputation. After partnering with Sproxil, In less than three months there were scratch labels on over a million sachets, reaching 25 million buyers. According to BIOFEM, it has seen a return on investment of over 1000% less than three months after implementing the service. 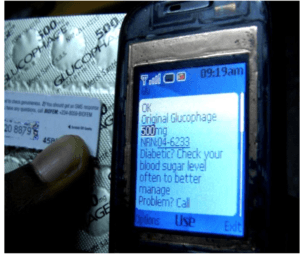 There are other ways that BIOFEM is using the information they are gathering through MPA technology to enhance their business. First, they are using it for sales forecasting, targeted marketing promotions, and customer education. Second, BIOFEM can track the specific mobile network associated with an incoming text message. BIOFEM can begin to identify areas of the country with possible counterfeit activity. Finally, BIOFEM can offer product discounts, distribute product updates, and communicate any other information the customer may need to know[8].

Sproxil is expanding into other industries

The simplicity of the technology makes Sproxil applicable in many other industries. The company is using its MPA technology in the agri-business industry in Kenya to help farmers verify their products[9].  Sproxil is solving a true market need and creating value for both consumers and other players in the supply chain.

A Better(ment) Way to Invest?

Student comments on Fighting the counterfeit drugs market, one text at a time