Commercial aircrafts are the backbone of the American economy. Amounting to $121 billion dollars, or 23% of total U.S. outbound trade, civilian aircrafts are manufactured by the Boeing Corporation[1]. Boeing controls nearly one hundred percent of U.S. civil aviation manufacturing and is the largest aircraft manufacturer in the world[2]. It is estimated that nearly 80% of the U.S. economy is in some way affected by the civilian aircraft sector, through manufacturing, supplies, subcontractors, and by-products of aircraft production[3].

The United States economy is at extreme risk of trade collapse due to its heavy Boeing exposure. Boeing aircrafts are front-and-center targets in a contentious debate over export subsidies and trade policy adherence. Given the long life of aircrafts, which can remain in service for over 20 years, and the lengthy training needed upon purchase, there is a strong incentive to stick with one aircraft type and brand over time[4]. Accordingly, competition for customers is severe.

Despite fierce competition, the U.S. aircraft industry initially supported free trade[5]. By the 1980s, this position began to change with U.S. aircraft manufacturers inching towards protectionism. This shift is attributable to two reasons: 1) an increase in the cost of designing large aircrafts, and 2) deregulation of American and European airlines impacting airline demand[6]. The former increased the scale of manufacturing needed for breakeven profitability. The latter changed consumer demand behavior, principally increasing demand for smaller planes that offered wider range. This behavioral shift prompted all manufacturers to produce more of the same type of aircraft to win over marginal customers, breaking into competitor’s longstanding niches.

By the 1990s, both European Union and the United States implemented aircraft subsidies, prompting international ire. Through a series of trade negotiations, the international community agreed to ban export subsidies. Since the 1994 signing of the Global Agreement on Tariffs and Trade, however, both the U.S. and E.U. have claimed malfeasance[7][8].

Another crucial element of aircraft trade wars is the role of export financing. In the United States, the Export Import Bank, for example, provides loans to customers of U.S. businesses. Some executives have referred to this lending as a “predatory export financing war,” as it inhibits global competition, claiming that the Ex-Im Bank is in effect “Boeing’s Bank”[9].

Boeing has spent too much time disputing trade. Just this past October, Boeing filed a complaint with the U.S. Commerce Department, arguing that Canadian plane manufacturer Bombardier “dumped” planes into the United States. Boeing alleges that Bombardier was able to sell the planes to Delta below list price due to $2.8bn of subsidies and direct investments from the Canadian government. The irony is that Boeing too benefits from U.S. government support—upwards of $5bn in annual subsidies[10]—not to mention outright Defense Department purchases of Boeing planes which comprise 23% of the company’s revenue[11]. Boeing is also the largest beneficiary from the Ex-Im Bank, which has provided $12 billion annually in loans to Boeing customers[12].

The Commerce Department responded to Boeing’s complain by levying a 300% duty on the Bombardier planes – a 220% tariff to compensate for tariffs and an additional 80% as a punishment for “undercharging” Delta. This has backfired against Boeing, with Bombardier deciding to sell its C series business to Airbus, which will now manufacture the planes in Alabama, dodging the tariff entirely. This saga demonstrates the extent to which companies will be creative to circumvent trade regulations, increasing competitive pressures against Boeing[13].

Airbus Head of Communications Opines on Boeing’s Complaint to the U.S. Department of Commerce, Source: Twitter 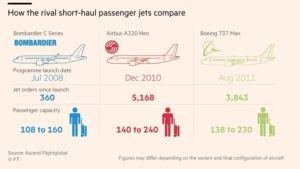 Boeing is, nonetheless, making small strides to address protectionism. Boeing is working with foreign customers to assemble and manufacture planes in foreign countries. In 2017, it is projected that a quarter of Boeing’s revenue will come from Chinese purchases[14]. Boeing leaders have realized that a shift in trade policy towards or coming from China could have “catastrophic effects” on Boeing’s profitability[15]. In turn, Boeing has announced that it will manufacture Chinese-airline planes in a facility near Shanghai.

Over the medium term, Boeing will need to continue to think strategically about the placement of its finishing centers. Further, Boeing needs to grow the diversity of its client relationships[16]. This would address geopolitical concentration risks, shielding the company from any specific bilateral trade spats. A diversifying customer base also addresses counterparty financing risks, particularly important as the fate of the Ex-Im Bank is very much in question with the current U.S. administration[17]. If this bank is no longer able to provide financing to Boeing customers, Boeing needs to be able to pull from a deep bench of global partners, from the developed and developing world, to maintain profitability.

Over the long term, Boeing needs to lead the U.S. aviation industry in upholding free-trade, leading by example. Instead of rallying against competitors for using subsidies, Boeing should urge the U.S. government to return to WTO talks to support free trade. So long as the U.S. favors Boeing, competitors will continue to find creative ways to restore their competitiveness; protectionism makes those shut out fight harder[18]. Boeing should recognize that it is very much the pot calling the kettle black and should think dynamically about engaging with international customers and their governments.

To that end, Boeing should anticipate increased competition from areas besides Europe, namely the emerging world. In 2016, China and Russia established the China-Russia Commercial Aircraft Company, which will develop a twin-aisle airliner to compete with Boeing’s 747 and Airbus’ A350[19]. Given the ascendance of emerging markets, it is inevitable that there will be increased competition. Boeing should accept this fact and conceive creative ways to engage with new entrants in the space. This could include licensing technologies to competitors or identifying a niche product where Boeing’s technological innovation will sustain a competitive moat. 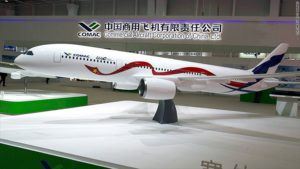 Many strategic questions still loom for Boeing. On the marketing front, does it make sense for Boeing to align itself with the U.S. government when opining on trade policy? Should Boeing crystallize its own, independent trade policy? To send a message to global customers, should Boeing look to shrink its revenue exposure to the U.S. Department of Defense? How can Boeing incorporate global markets and labor into its manufacturing process to promote good will across nations? Should Boeing carry this burden, or should it pressure the U.S. government to reject protectionist policies?

Student comments on Fight or Flight? Boeing and the Intensifying Risk of a Global Trade War