Driving through Iowa on my way to the Harvester Plant at John Deere was my daily ritual for majority of the summer of 2011. For roughly an hour, corn fields would arise left and right. Multiple “Hulks”, the largest Harvester machine made by Deere, drove up and down fields with thousands of acres. Whether the produce be corn, wheat, or cotton; John Deere engineers were certain that hundredths of thousands of people would enjoy the harvest through meals, clothes and even energy (ethanol). Although the pride on the John Deere brand was what fans raved for, our focus was mostly on building great machines that outperformed competitor while on the field. Although the last point of contact with our customer base was the dealership and occasional maintenance for the machinery, this all changed when John Deere, the world’s largest manufacturer of agricultural equipment, decided to bank on the opportunity to design an ecosystem that could contribute to the cause for planting and harvesting produce for 10 billion people by 20501.

The introduction of GPS to farming equipment 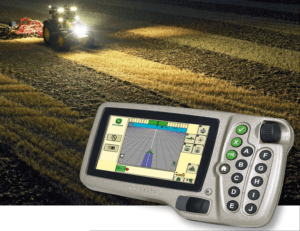 According to the Farms and Farmland Census of Agriculture2, the average size of U.S. farms in 2012 was 434 acres. In addition, a limited number of machine operators would manage the end to end planting to harvesting sequence.

Considering the size of the average farm in the U.S., poor machinery operation when planting or harvesting could represent considerable expenses. Three particular problems were typical in such large fields: covering farm areas twice, not covering certain farm areas, and massive fuel consumption. With the introduction of GPS systems, in 2001 John Deere saw the opportunity to provide positioning data that would locate planters, tractors and harvesters within inches anywhere on planet Earth. According to The Economist3, the implementation of this technology resulted in reduction of fuel bills by as much as 40% in some cases as well as better effectiveness from fertilizer and other soil enhancers.

The rise of companies such as Blue Diamond or Wonderful Pistachios created a craze for growing and harvesting these high-priced snacks. Furthermore, the planting and maintenance of such nuts is not s straightforward process. According to two Dutch researchers at UNESCO’s Institute for Water Education, growing a single almond requires 3.8 liters of water. Stringent requirements such as water consumption forced farm owners in California (which produces 80% of the world’s almonds3) to get smart about real-time control of the nut’s planting and growing processes. The result was the implementation of moisture sensors and central distribution of water to maintain an optimal field. 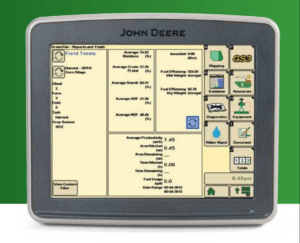 The innovation in control-systems initiated in the nuts industry inspired the engineers working on production of more traditional crops such as corn or soybeans. Beyond operational efficiency while planting and harvesting, John Deere saw the opportunity to introduce analysis of the crops being harvested on real-time. Many farmers who are beef and dairy producers utilize corn silage to feed their cattle. John Deere’s HarvestLab lets operators assess the content of corn silage by several quality parameters. Farmers are now able to determine moisture, protein, starch and fiber on a real-time basis. The real-time nutrient analysis allows for farmers to analyze feed rations for crude protein as well as fiber, and conduct daily adjustments to improve nutrition and reduce feed variability.

Better utilization of fertile soil is critical practice to continue improving food output. John Deere has taken full advantage of the opportunities presented by GPS technology. Beyond aiding farmers, the net result is a larger supply of crops for food consumption or energy production.

The digital control of quality parameters for cattle feed has immediate consequences on the food value chain. As developing countries continue to push more people into the middle class, the demand for meat will continue to rise. The data analysis and digitization of agriculture at the largest agricultural equipment manufacturer will have a long term impact on mankind’s ability to feed 10 billion people and beyond.

Is TAG Heuer Out of Time?