While Amazon deploys delivery drones, the construction industry remains largely unchanged over the past 50 years, resulting in a 10% decline in construction efficiency since WWII.[1] Current megatrends such as rising land prices, rapid urbanization, and the housing affordability crisis have spurred some real estate developers to digitize construction. Forest City Realty (“FRC”), a multi-billionaire developer, first disrupted the industry through high-rise modular construction—32 stories later, 461 Dean Street is the world’s tallest prefabricated apartment building. Its construction showcases the evolution of FCR’s supply chain—and what can go wrong for early adopters of new technology. 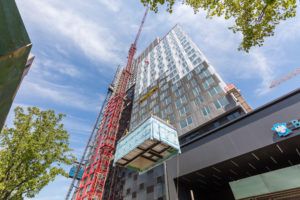 Contrary to traditional on-site construction, modular construction involves prefabricating units off-site before stacking them on-site, Lego-style. As part of their master-plan to develop 6,000+ apartments near the Barclays Center, FCR set up a modular factory in the Brooklyn Navy Yard. FCR estimated this would result in cost savings of 20%+ along with saving 4 months on construction.[2] More broadly, the newly automated process would result in safer conditions (e.g. eliminates unpredictable weather), less waste and noise, and would prevent projects from being labor constrained. Instead of waiting for phased building occupancy towards the nearly-completed stage of a building, tenants would immediately move into finished prefabricated units, creating a prototyping- feedback system where developers could tweak factory design to produce better (and higher priced) future units.[3] 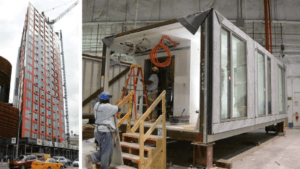 FCR first engaged SHoP Architects to create a virtual model, which then passed to the contractor, who translated it into 3D construction documents to Skanska, the Construction Manager. Skanska was responsible for overseeing the factory process, transporting, and assembling the units on-site.[4] The supply chain radically shifted from a linear process into parallel processes. Instead of building floor by floor, the building was constructed all at once, in-factory (e.g. while construction workers were still digging the foundation of the building, electricians were able to work on wiring the units).[5] 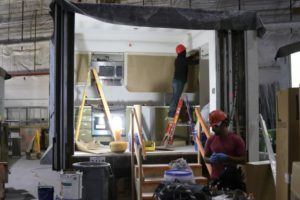 Despite technical innovations, Skanska abandoned the project two years later, alleging that FRC’s flawed design caused alignment issues. Counter-suing, FRC claimed the builder botched the process. FCR and the architects conceived of the design, but the contractor had to then translate their work into building instructions. Though FCR spent at least $3.5 million in R&D at the onset, Skanska alleges that narrow design tolerances resulted in tiny errors that, in practice, were compounded through stacking hundreds of pieces.[6] This highlights the difference between the design and construction models—the challenge in modular construction is that developers must shift to a manufacturing model, where the design, development, and construction teams all collaborate from the beginning to understand how pieces will fit together.

Prefabrication requires not only for FCR to develop new technology—but also for every member of its supply chain to change his process. The system necessary to pull off high-rise modular construction must shift from a linear sequence (architects providing the design to engineers, who hand off plans to builders, who then engage contractors) to an integrated design-development construction process. I believe this starts with all the different parties incorporating a much more in-depth prototyping system. Further, there must be greater transparency throughout the supply chain—if defects occur on the factory floor, the design and contractor teams must stay involved and react quickly to change the blueprint going forward. Using multidisciplinary teams would improve the process by incorporating expertise from non-construction industries. Finally, though the industry’s transformation relies on private companies placing their “bets” on adopting new technologies, their adoption can be further encouraged by governments.

After four years of litigation, delayed construction, and monetary write-offs, FCR completed 461 Dean Street in 2016—two years behind schedule. Shortly thereafter, FCR sold its modular construction business, FC Modular, which is currently active for low-rise construction. Though FCR’s attempt to digitize construction “failed” to materialize cost savings, experts estimate that within 10 years, full-scale digitization can lead to up to 21% of cost savings, or as much as $21 billion a year globally.[7]

Google just reportedly invested $30 million in a modular housing start-up to provide affordable housing for its employees in Silicon Valley.[8] FCR’s CEO called the failure of 461 Dean Street “the growing pains of innovation”— what kinds of firms can/should take on real estate innovation, and which player within the supply chain should lead the charge? Would modular construction change things for consumers (tenants)—or would cost savings merely increase developer profits? As technologies like 3-D printing and modular construction grow, what are the implications for the built environment and city planning?

The Digitization of Ice Cream

H&M adapting to the digitalization of retail

4 thoughts on “Factory-assembled skyscrapers: an episode of The Jetsons, or the future of Real Estate?”