In 2001, Lockheed-Martin was selected as the main contractor for the US Department of Defense Joint Strike Fighter (JSF) project. This ambitious plan aimed to replace more than 3,000 operating aircraft and satisfy the needs of the US Airforce (USAF), Navy, Marines, and allied countries. The chosen design, F-35, is a family of multirole, single-seat, stealth fighter jets[i]. The massive scale project went underway as a joint effort spreading many industries and partners in and out of the US. It is the most expensive military weapons system in history, with total costs estimated at 1.5 trillion USD[ii].

The road to operational capability

The F-35 is heavily digitized, with new avionics, integrated electronic sensors, displays and communications systems. Among other innovations, jet maintenance and logistics are expected to change significantly.

Imagine an F-16 heading back to base after a mission. The crew identifies a radar malfunction that they cannot seem to overcome. After the jet lands, the maintenance crew gathers to inspect the aircraft. They spend hours trying to isolate the problem, just to find out that the source of it is a specific electronic subcomponent. They call the expert for this subcomponent, who works on the jet for few additional hours, but figures out it is beyond immediate repair. The crew asks the airbase logistics unit to provide the necessary spare part, but unfortunately this specific subcomponent is unavailable in base.

This scenario shows some of the difficulties inherent in maintenance operations[vi]:

The result: inefficiency, waste of time and money, and more importantly – increased downtime that results in inferior operational performance.

Big Data to the Rescue

With those challenges in mind, Lockheed-Martin introduced a revolutionary system for the F-35: Autonomic Logistics Information System[vii] (ALIS).

The basic idea relies on data analysis and connectivity. With many of the F-35 components digitalized, essential data can be transmitted from the jet to ground stations. ALIS provides information infrastructure that spans the entire global F-35 fleet, recording and transmitting aircraft health and maintenance information to the appropriate users on a globally-distributed network. It is a one-stop-shop that integrates a broad range of capabilities including operations, maintenance, prognostics, supply chain, customer support services, training and technical data. 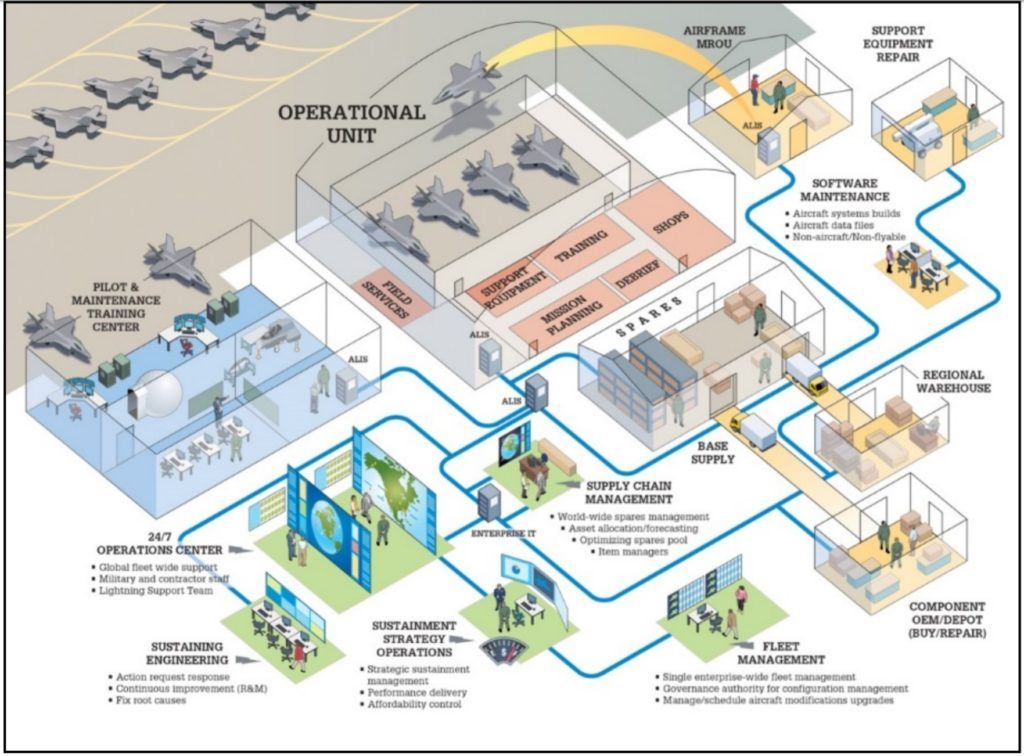 How would the scenario described earlier play out using ALIS? The faulty component is identified by the system automatically while the jet is in air. Technicians on the ground receive the data, and call on expert personnel. At the same time, a nearby logistics base gets an alert to arrange an immediate delivery of the necessary spare component to the appropriate airbase. By the time the jet lands – the part is on its way and the right personnel is ready to replace the part and fix the problem. Even Lockheed-Martin’s main factory in Texas receives the data, helping the company track performance and manage global inventory of spare parts.

The upsides are huge: downtime is minimized and efficiency is increased. Labor hours are utilized better, and operational capability increases. The data is transparent across the supply chain, reducing the bullwhip effect and allowing a reduction of inventory and associated costs across the chain.

Despite the great advantages, there are some reasons for concern. One current problem of ALIS is reliability. Reports from 2015 suggests that 80% of issues identified by ALIS are “false positives” – maintenance problems that simply do not exist[viii].

Another, more serious issue is cyber-security. According to Pentagon’s operational test chief, ALIS could be vulnerable to cyber-attacks[ix]. Connecting some of the most sensitive national security assets to an international data system is counterintuitive. Information security needs to be a top priority, as nations cannot allow any operational data to leak. The fact that the project involves numerous nations only exasperates the problem, as some of the data is shared.

Additional investment in the system is needed to reduce these threats. Cyber-security budget should be allocated annually, as this ongoing threat can affect the entire fleet. Focusing on these challenges is essential in order to benefit from the project’s upside with minimum risk.

The Limits of FinTech Disruption