The climate change may pose significant problems and constraints in our life near future: the scarcity of foods, the higher exposure to health risks, a necessity of avoiding fossil fuels utilization and improving energy efficiency, etc (1).

But there is one thing which can possibly resolve most of the issues:  Euglena, the 0.05mm  microalgae.

euglena Co., Ltd (Euglena Co.) based in Tokyo, Japan,was launched in 2005 and became the first company in the world to succeed to mass-produce euglena outside (2). Euglena Co. went public by listing itself to the Tokyo Stock Exchange’s MOTHERS (“Market Of The High-growth and Emerging Stocks”) on December 20th, 2012 and moved from MOTHERS to the first section of the Exchange on December 3rd, 2014 (3) and the stock price skyrocketed after IPO to the today’s level of about nine-ten times of the first day’s price as people see the plenty of possibilities euglena carries.

The tiny euglena is expected to be utilized in broad ways:

1.  As Foods and Sources of nutrients

It is said that the global warming would badly affect our access to water and it would result in less production of food. Moreover, as agricultural activities represented by raising livestock account for the large part of CO2 emissions, current agricultural practices may be necessary to be reconsidered while the world would need more and more foods due to the expected population growth.

Euglena can be a key to solve this difficult situation. As euglena has hybrid characters as both a plant and an animal, while euglena photosynthesizes consuming CO2 as a plant does, it contains proteins and fats (4).

Furthermore, it contains as many as 59 nutrients, is efficiently digestible and absorbable to our bodies, and has more merits and Euglena Co. describes euglena as “superfood” (5). 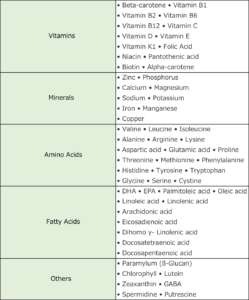 Now you can buy the euglena products through their EC website “euglena farm (http://www.euglena-farm.jp/Index).” In addition, As euglena can be produced while reducing CO2, it has a huge potential as foods and sources of nutrients in the future world with many constraints.

In addition, euglena can also be used as animal feeds instead of crops. This would contribute not only to change the above-mentioned agricultural practices but also to enhance the quality and health status of livestock (6). As euglena can be produced while reducing CO2, it has a huge potential as foods and sources of nutrients in the future world with many constraints.

Though mentioned little above, another feature of euglena we should look at is its high capability of capturing CO2 and converting it in oxygens; it is as efficient as two to three times of tropical forests in terms of per acre.  Euglena Co. is working with other entities to utilize this feature to purify industrial pollution (7).

Euglena can be a tool which would more directly attack the causes of the climate change by turning CO2 into oxygens or by dissolving pollutants discharged.

While euglena has already been provided as foods, Euglena Co. is more enthusiastic about euglena’s potential as biofuels. Euglena Co. has been collaborating with some companies such as Isuzu Motors Ltd. and ANA Holdings Inc. End of the last year, Euglena Co. announced that it will set up a demonstration plant by 2018 and start commercial production in 2020s, and ANA Holdings Inc., Japan’s one of two major airlines, would use it as a part of the fuel mixture (8).

Though Euglena Co. is still working on improving the productivity, it is no longer a fantasy in the distant future to access to alternative fuels which would emit not CO2. 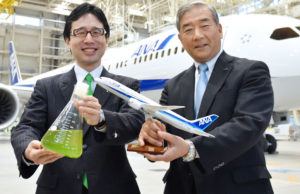 While dealing with a climate change is a huge challenge many entities all over the world should seriously take and manage, one venture based in Tokyo, with a micro plant-like creature, can be a game-changer.

Student comments on Euglena – microalgae – the future of Food AND Energy