Equinix is an example of a very effective business and operating model.  The company has built 100+ data centers across 15 countries around the world which enables its ~5,000 customers to operate and eventually serve all of their respective customers, i.e. you, the consumer.  For example, one of Equinix’s name brand customers is Hulu.  When Hulu serves you the latest episode of The Daily Show, it likely does not stream it to you directly from Hulu’s offices out in Santa Monica, CA.  Instead, the actual file is sitting somewhere in the “cloud”, or more specifically, a server located near you sitting in an Equinix data center.  Equinix essentially sits at the middle of the ever expanding growth of the web, serving as a supplier of outsourced IT infrastructure to leading global companies such as this.

Most large enterprises manage their own data centers in some shape or form, whether it’s a small room at one of their business locations or it’s a large warehouse-like floor.  However, as companies grow and bandwidth demands increase, it becomes increasingly difficult and expensive to run and manage their own servers.  The core part of Equinix’s business model and where it generates most of its revenue from is through “colocation”, or providing space, power, cooling, and security for its customers’ servers at Equinix’s own data center locations.

Thus, one of the best tail winds behind Equinix’s historical and continued future growth is its connection to overall growth of the internet and bandwidth needs worldwide.  Customers outgrow their existing data centers and look to outsource their IT Infrastructure to save on costs and spend their time focusing on growing their core business instead.

Equinix colocation data center space is offered on the basis of individual server racks/cabinets or cages ranging from 500 to 10,000 square feet in size.  The company will deliver this service with a promised 99.9999% uptime, minimal latency, and provided access to 1,000+ networks.

Taking our Hulu example one step further – if Comcast is your internet service provider (ISP), the content you requested to watch will likely have to pass through Hulu’s servers and then through Comcast’s servers before finally reaching you, the consumer.  A major part of Equinix’s operating model is the fact that it functions with a network- and cloud- neutral model.  The neutrality means that any customer of Equinix can choose to connect with another customer within Equinix’s existing network.  Or in other words, if Hulu has servers located at Equinix’s closest data center to Boston and Comcast has their servers located in the same data center, the two companies can choose to connect their servers directly instead of having the file run through the web across who knows how many other servers and switches before reaching the final destination right next door.  This functionality is called “interconnection” and saves both companies time and money.

Being the Established Middle Man Pays Off

Equinix is a perfect example of an effective middle man.  It sits in the middle between the Enterprises (financial institutions, energy, healthcare providers), the Service and Content Providers (wireline networks, content media), and the consumers.

Facebook is an example of another name brand customer of Equinix.  By now, you may have read in the RC TOM Facebook case how Facebook grew its data center footprint to three locations in Iowa, North Carolina, and Oregon.  These are all rural locations because when Facebook wants to locate its servers in a data center near a major metropolitan area, it simply relies on the data centers Equinix has already established.  Equinix has built up a global footprint across major metropolitan areas around the world which has created barriers to entry into the space.  As mentioned above, it is very expensive to run your own data center, let alone build your own.   Additionally, Equinix’s operating model of being network-neutral has added a competitive advantage over time after adding such large customers as Comcast, AT&T, Verizon, Bloomberg, LinkedIn, Microsoft, Cisco, and many more.  Joining Equinix as a customer gives access to the large ecosystem the company has already created over time.

The company has already established itself as a leader in scaling the internet and facilitating content delivery.  Based on Equinix’s exposure to growth of Internet bandwidth needs, its ability to leverage its strong ecosystem, and its exposure to mobile and cloud adoption in the future, I would expect continued strong growth for the company in the foreseeable future.

The market has rewarded Equinix over the past few years for strong execution and growth outlook as shown in the relative performance between the company and the broader stock market below:

Me, at an Equinix data center in Amsterdam below.  Notice that the data center is literally surrounded by a moat! Cool! 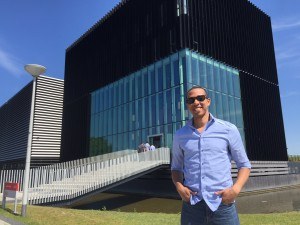 Student comments on Equinix: The Hub of the Internet