Nowadays, most of the energy consumed by the world comes from fossil fuels. Every day, humans consume 96 million barrels of oil and liquid fuels, of which 42 million barrels are shipped from one place to another through the global trading network[1]. As the world becomes increasingly concerned about global warming, governments have issued various stringent policies and regulations to control the emission of greenhouse gases, the action profoundly affects every participant in the trading system. 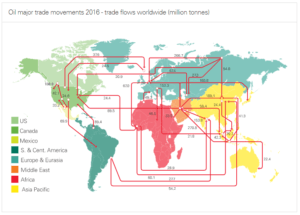 In 2010, The international Maritime Organization designated specific portions of U.S., Canadian and French waters as an Emission Control Area (ECA) in which stringent international emission standards will apply for ships. According to the standards, by 2015, ships operating in designated ECAs can only consume fuel that contains equal to or less than 0.1% fuel sulfur. The table below summarizes the standards that apply globally and within ECAs. 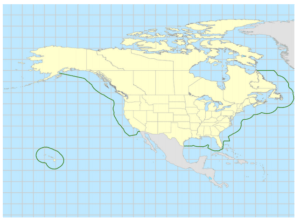 Since trading houses use tankers to ship oil and gas, they became victims of such regulation. To meet the new requirement, they need to use lower sulfur fuel oil, modify tankers for additional distillate fuel storage or equip them with exhaust gas cleaning devices (“scrubbers”). In other words, trading houses are faced with rising operating costs and falling profits and can hardly pass on these costs to buyers/receivers.

Take Liquified Petroleum Gas (LPG) as an example. After the shale gas revolution, Japanese trading house Itochu Corporation started to purchase LPG from U.S. and use Very Large Gas Carriers (VLGC) to ship the cargo to the Far East. To operate in ECAs, it needs to bunker the vessel with ultra-low sulfur fuel oil (ULSFO) or with low sulfur fuel oil (LSFO) and install scrubbers. Per the latest fuel prices, the additional fuel alone would cost approx. $13,000/voyage. The calculation is shown in the table below.

U.S. seaborne LPG export volumes continue to grow, standing at approximately 8.1mm tonnes in Q1 2017[5]. Therefore, the projected export volumes would reach 32.4mm tonnes and would need 736 VLGCs to carry. To sum them up, the additional costs would mount to $9.6mm (736 voyages * $13,000/voyage). This is solely bunker and solely LPG, which provides less than 2% of the total energy the world consumes.

Trading houses in the oil/gas industry such as Itochu are “price takers”. Though reluctantly, they can only bear the extra costs brought about by environmental policies and regulations. For example, despite that the upfront cost of installing a scrubber could be as much as $5 million for some vessels[6], Itochu’s management promptly instructed their trading teams to charter new tankers with scrubbers, order expensive bunkers to conform to the new policy.  In the medium term, the management must seriously consider questions such as how long it will take for the equipment to pay for itself and how to maintain the thinner-than-ever profit margin. In a narrow sense, the trading house’s interests have been compromised in exchange for a “better environment”. But in a broad sense, all human beings are beneficiaries of energy saving and emission reduction, provided global warming is a true statement.

Itochu also operates refineries in the midstream, which also became victims of global warming claim. Because of very stringent emission regulations in Japan and relatively outdated refinery equipment, refineries must choose to purchase more expensive low-sulfur crude oil and other feedstock. Refineries’ situation in developing countries such as China might be slightly better. First, because of newer plants, refineries can accept boarder specifications of feedstock without compromising the emission standards. Second, environmental pollution has become so profound that the entire country has put vast social resources to address the problem.

To promote energy saving and slow down the trend of global warming is a noble mission and vision. Yet not until working in oil/gas industry did I realize that not everyone in the world is the beneficiary of such initiative. Those working in traditional industries such as oil/gas are battered. Not only technology, but also new policies, regulations and initiative would cause disruptive impact. While almost everyone believes that global warming would not affect him or herself, is it fair that certain companies have to pay the bill for the entire world?