The Massachusetts Turnpike (Mass Pike), in Figure 1 below, also known as I-90, has been collecting tolls since it first opened in 1957 on the premise of maintaining high quality roads. (1)

Highway tolls have historically been a manual process, requiring drivers to come to a complete stop and pay operators during all hours of the day.  In 1998, the Massachusetts Department of Transportation (MassDOT) installed an electronic tolling system known as Fast Lane, which later merged with E-Z Pass.  According to MassDOT, as of March 11, 2015, the Mass Pike consisted of 24 plazas with a total of 147 toll lanes, 77 of those lanes were staffed, and the other 70 were E-Z Pass. The manual process was much more labor intensive not only at the toll booth but also for cash collection and included additional processing steps such as armored car service, counting rooms, auditing, cash control systems, and security.  The staffing needs for the manual process required 491 employees, whereas the electronic process required only 135 employees. (3) Due to the additional process steps and labor requirements for cash collection of the manually operated tolls, the operating costs differed drastically, especially when compared to total revenue collected, and this is shown in Figure 2 below. (4)

From the drivers perspective, the E-Z Pass system drastically reduced wait times at the tolls, however there is a caveat and that is, the E-Z Pass only reduced wait times during low-medium volume traffic time frames.  Unfortunately, most commuters use the Mass Pike to travel to and from work between the hours of 0600-0900 and 1500-1900 and will typically find themselves in traffic due to the manual toll process and are unable to use the ‘E-Z Pass Only’ lanes as seen below in Figure 3. 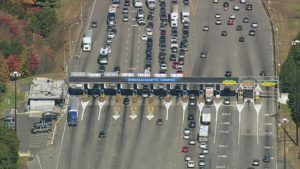 Although the E-Z Pass system was originally a step in the right direction to relieve traffic at the tolls, MassDOT needed to make improvements to the system to account for the high volume timeframes.

As of October 28, 2016, Massachusetts rolled out its new AET system.  AET, unlike the E-Z pass system, is a fully automated tolling system that eliminates the need for collection stations.  AET is compatible with the current E-Z pass transponder for charging drivers and will also use license plate imaging to identify and bill (via mail) drivers without transponders.  Figure 4 below shows a typical AET toll zone, in which a total of 16 AET gantries will replace the 24 existing toll plazas. (4) 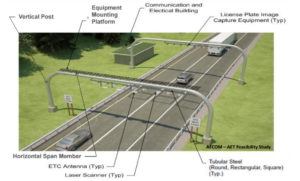 Installing and integrating the AET system, in the end, will cost roughly $474M, which includes construction of the gantries, “backoffice” and customer service centers, and demolition of the existing tolls.  (4)  Although there is a high upfront cost to the AET there are many financial and non-financial benefits that will be shared by both the state and drivers.

Financially, the operating cost of the tolling system will decrease by an estimated $23M in its first year of operation.  This savings is due mostly to the elimination of the manual collection process and the reduction in labor that is required to operate the AET system.  (4)  While the state is saving money, drivers also receive benefits which include a price reduction (7%), decreased time in the car, reduced fuel costs from idling in traffic, and safer commutes.  It is expected that each year with AET that drivers will save over 280,00 hours of vehicle delays annually and 500 to 2500 gallons of gasoline per day. (4)  With idling times reduced, this saves 1800 to 7800 tons of CO2 from being emitted into the atmosphere per year.  (U.S. Energy Information Administration, 2016)  In addition to the environmental and economic benefits, AET systems on average improve safety on the highways by eliminating up to 28% of the total number of accidents.  (7)

As technology continues to be developed and implemented for highways, its important to understand how all roadways are interconnected, not just improving one part of the system.  The implementation of the AET system is the first step in optimizing our daily commutes.  This technology collects real-time data that can be used by transportation engineers to reduce congestion and maximize flows. (8)  Eventually as more roadway systems are installed and integrated, the data that is collected can be used to begin optimizing the supply and demand of road space, reducing costs and travel time, essentially making our methods of travel more cost effective and efficient.

Fujifilm: Surviving the digital revolution in photography through diversification into cosmetics

Student comments on Efficient Roadways: How the Masspike is speeding up your commute