When was the last time you stepped inside a K-12 school? Did you notice anything there that didn’t exist when you were growing up? Perhaps it’s a Chromebook on each student’s desk, a SMART board on which the teacher projects her computer screen, or the fact that there are very few papers anywhere.

Earlier this year, EdTechXGlobal, a leading education technology-focused conference, released a forecast that the global edtech market is expected to reach $252 billion by 2020[1]. The education market is currently a $5 trillion opportunity, yet only 2% is digitized (~$100 billion). As the edtech market is expected to more than double in the next five years, traditional education companies must also evolve to take advantage of the growth, especially as young people’s consumption habits and preferred modes of research shift (Exhibit 1).

Although most companies are capitalizing on the technology trend, one major public company has decided to position its growth strategy in a subtler way. Houghton Mifflin Harcourt (“HMH”) is a leading provider of pre-K12 education content whose core business for over the past 150 years was in education and trade publishing. However, in its most recent investor presentation, HMH, who has traditionally published textbooks, instructional technology materials, assessments, reference works, and fiction and non-fiction books, has chosen to frame its new content as a design improvement rather than a technological improvement: “improving design will have a greater effect on learning outcomes than adding features or increasing the use of technology[2].” Why? I believe that because educational software advancements in the modern age requires relatively low capital investment, HMH needs to find a new way to stand out amongst all of the other applications. In order to do this, HMH needs to signal to its customer that the true value proposition of the products is the functionality of its platform, rather than being the fastest or most tech-enabled software (Exhibit 2).

Furthermore, a key component of HMH’s strategy is to expand into adjacent education areas, primarily services such as professional development, consumer education, early childhood institutional, and response to intervention. While these markets are small (~$17 billion altogether (Exhibit 3)), the nature of these services are more stable and represent recurring revenue as once business is won, customers are less likely to switch as costs of changing instructional material year to year is high. 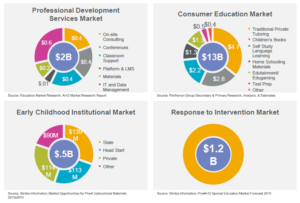 One example of this is a recent acquisition that HMH made. In August 2015, HMH announced that it had acquired Scholastic’s Education Technology and Services business for $575 million[3]. Scholastic’s EdTech (“EdTech”) segment provides digital intervention curriculum, products and services to schools in the U.S., as well as various assessment and other consulting services. With this acquisition, HMH expects EdTech to help craft a market leading position in intervention and enhance its offerings and capabilities in growth areas such as consumer business platforms and marketplaces[4]. By acquiring these services and relationships that Scholastic has built, HMH can more quickly scale its intervention services as the acquisition enhances its ability to cross-sell various products, such as literacy and mathematics intervention.

While I believe it’s a smart move on HMH’s part to invest into these high growth areas and play defensive on its educational content, I don’t believe that HMH should completely focus its strategy on responding to the changing technological aspects of education. In its own Educator Confidence Report (conducted by a third party market research agency), two-thirds of educators cited infrequent use of digital tools for various learning purposes, and 71% of those who do use some type of digital material in their classrooms use free / open-educational resources. This implies that the adoption curve is slow, especially as in the education market it’s the administrators who are the key decision makers in selecting paid instruction content and products. I argue that instead, HMH should focus on enhancing the privacy and security of its products instead, as 58% of educators are either “very” or “somewhat” concerned about student data privacy. (675 words)

Student comments on Education Content in a Digital Age