I chose Eastman Kodak (“Kodak” or the “Company”) as an example of an organization that is ineffective at driving alignment between its operating and business models. I was particularly interested in Kodak due to the magnitude of its ineffectiveness and eventual demise. In 1996, Kodak was the fourth most valuable brand in the United States after Disney, Coca-Cola and McDonald’s[1] and generated $15 billion of revenue. By 2012, Kodak generated less than $3 billion of annual revenue and had declared bankruptcy.[2] 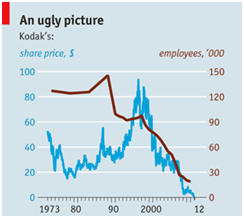 Figure 1: Kodak stock price and employee headcount over the past 4 decades[3]

Kodak has not had a clear and consistent business model. For most of the 20th century, Kodak’s core business, as perceived by outsiders, was selling photography related products. It used a razor and razorblade strategy of selling cameras and films to customers. Although cameras sales generated low profit margins, it helped Kodak attract customers who then bought film, a ~80%+ profit margin product, from the Company on a recurring basis.[4]

However, outside of its photography business, Kodak acquired and operated a variety of disconnected businesses over the years, including Sterling Drug, a pharmaceutical company Kodak purchased for $5.1 billion in 1988. Kodak was on a buying spree and lost sight of its core competency – the photo business.

In fact, by the time Kodak emerged from bankruptcy in 2013, it had completely de-emphasized the photography business and shifted its business model to B2B commercial printing and packaging.[5]

Kodak built a sizable worldwide infrastructure of manufacturing facilities and distribution network to support its photo business. The complex process of operating and manufacturing film required vertical integration, which led to Kodak owning most parts of the supply chain, including raw materials such as chemicals. The scale required for cost effective film production created significant barriers to entry and allowed Kodak to enjoy decades of minimal competition.

Kodak invested heavily in research and development, and housed its scientists in a centralized facility in Rochester, New York. It had one of the largest R&D centers and earned 19,576 U.S. patents between 1900 and 1999, and held a portfolio of more than 1,000 patents in digital imaging alone.[6]

However, while Kodak’s R&D was certain industry leading and state of the art, there was little governance. With what many described as a “laissez-faire” culture, research managers often pursued projects for a long time before management even made a decision of whether or not that product fit with the company’s business model. This is reminiscent of the Wyeth Pharmaceuticals case that we discussed in class, where management failed to manage the innovation process and kept projects in exploratory or discovery phases for extended periods without making a decision regarding their progression or termination.

Furthermore, Kodak had an organizational structure with layers after layers of bureaucracy and a corporate culture that was resistant to change. Despite countless innovations from the R&D team, Kodak failed to successfully commercialize many of these ideas at the corporate level. For example, Kodak engineer Steven Sasson invented the first digital camera in 1975, but middle level management tried to sweep it under the rug, and Kodak did not offer its first consumer digital camera until 18 years later.[7]

Misalignment Between Business and Operating Model

Kodak failed to manage innovation and drive alignment and consistency between its business and operations. The Company was in the business of photography and serving its customers, but it did not listen to or focus on its customer needs. Research and development was mismanaged and scientists were left free to pursue research in any area that they desired. There was no focus on generating innovation in photography related products, and customer needs was an afterthought.

Even when the R&D department did manage to generate ideas that aligned with the Company’s business model objectives, the operating model failed to escalate those ideas to the top. There was a disconnect between the research lab and upper management due to the layers of bureaucracy and lack of consistent vision. Middle level management was fearful of introducing technologies that would disrupt Kodak’s film business, and this fear of cannibalization prevented many great ideas from being implemented. It is ironic that Kodak’s film business was decimated by the digital camera technology that it had invented. 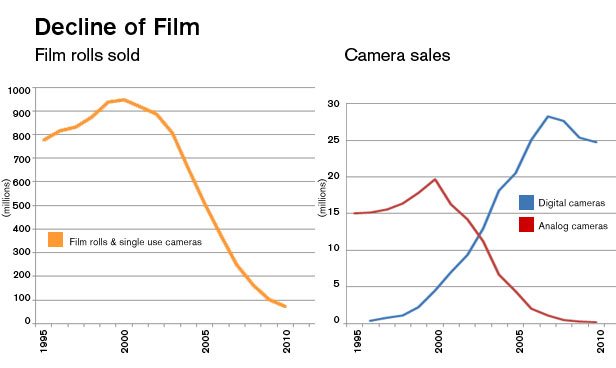 This led Kodak to transition from a market leader in the photography business to a niche player in the printing business struggling for market share. Kodak had the technology and innovation to respond to the changing environment, but it could not make the operational and business decisions to implement change. The company slid from an innovation giant and industry leader to a struggling shadow of its former glory.

Student comments on Eastman Kodak: From Market Leader to Bankruptcy