Corruption is real. It has made many of my friends` parents flee Moldova in search of decent pay so that they could support their families. Corruption is the “public enemy number one” in developing countries1. It cripples development. Corruption gives power to the rich and powerful, while reducing it for the poor and weak; it augments inequality. And it is costly – 5% of global GDP, the equivalent of US$ 2.6 trillion2, of which US$ 1.5 trillion is estimated to be bribes only3.

But the world is not doomed; I see light at the end of the tunnel. Advancements in technology allow for quick and cheap ways to combat this phenomenon. I believe digitization of governments is a great solution. E-Governments use information and communications technologies (ICT) to work more effectively, share information in a transparent way and provide better quality services. Numerous studies empirically showed that digitization of governments corresponds to decreases in corruption4,5. There are three main ways through which government digitization can reduce corruption: increasing transparency and accountability, removing the middle-man and creating trust between citizens and public workers6.

Estonia is a great example of how a country can fight corruption using IT tools. After the Soviet Union collapse, Estonia found itself a small, thinly populated country without access to natural resources. Its leadership quickly realized that digitization is a way to develop beyond the country`s natural means. Over the years, key milestones were achieved: opening of first online public sector database (1995), creation of common state portal (www.riik.ee; 1998), of X-way data exchange layer allowing for cross-usage of public data (fig 1; 2001) and introduction of electronic ID cards (2002). To fully leverage up these ITC initiatives, in 2000 the Estonian parliament passes legislation declaring internet access a human right. All these actions can explain how come Estonians had the highest number of startups per person in 2013 and why they developed Skype and Kazaa. 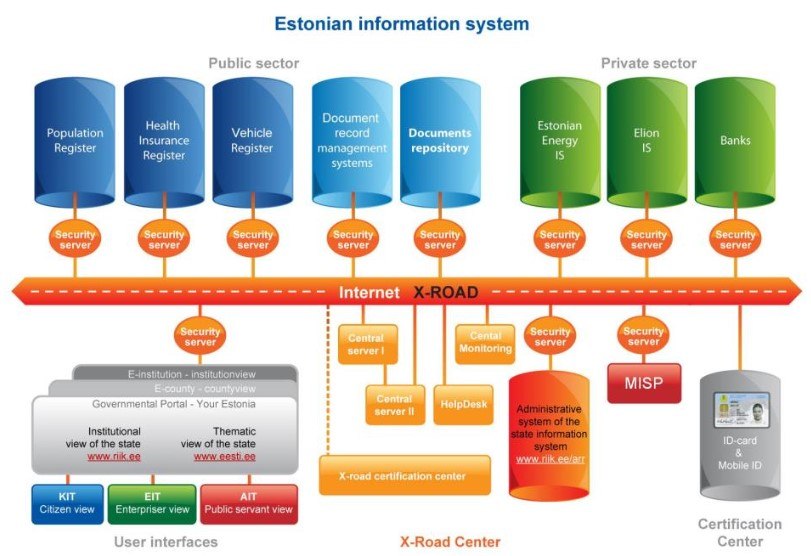 More specifically, to tackle the transparency and accountability issues, the government introduced No citizen left behind program, designed to give access to e-Government services to as many people as possible. During a 4-year period after the initiative started the number of households with computers and internet access increased from 45% to 67%, widespread free public wi-fi has been provided in both rural and urban areas and 700 Public Internet Access Points (PIAPs) have been created. These results enabled people to access good quality, relevant and trustworthy information – which in turn empowered them to avoid and denounce corrupt behavior of government employees. It also improved accountability as the availability and accessibility of information made government officials think twice before taking decisions.

To address the middle-man problem, the government instituted the Making efficiency and effectiveness a reality goal which translated in making almost all interactions with the government to be done online. A central register for public procurements accessible online free of charge was created, a place where all public procurement notices have to be published. Another created portal allowed one to establish a company, change the information of an existing company and/or submit annual reports. All these initiatives removed the middle-man, drastically reducing corruption simply because “you can’t bribe a computer”7. On top of that, by eliminating bureaucracy, these reforms led to greater efficiencies, estimated to have provided savings amounting to 2% of GDP8.

To further bridge the gap between the government and citizens, Estonia introduced e-voting (first country in the world to do so). Not only did this reform increase the turnout for elections, but it also engaged groups such as young people that would otherwise simply not participate in the elections. It also sent people the message that what they think matters and that the government wants to have their input in the decision making process. 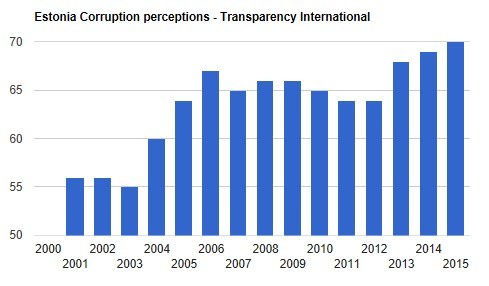 Estonia is in a great position from an e-government perspective. Nonetheless, I believe the country can completely break the old barriers that are deeply embedded in its systems by further educating people about e-Government`s benefits, by pushing internet penetration (currently at 84%) to the maximum and by ever increasing transparency and accountability levels. As Estonia further improves, I would also recommend that the government keeps in mind the risks that come with digitization such as data theft and less control over the information flow. On top of that, e-Government is not a panacea to corruption. It has to be part of a comprehensive plan to fight corruption. [784 words]

Bezos, the Washington Post and the future of news publishing

Student comments on e-Governments vs. Corruption. The case of Estonia