The North American Free Trade Agreement entered into force on January 1, 1994, eliminating most barriers to free trade between the United States, Canada, and Mexico. [1] Ford Motor Company was one of many companies able to benefit by optimizing its manufacturing operations without the distortion of tariffs and other customs barriers. Today the Company has three manufacturing facilities in Mexico: 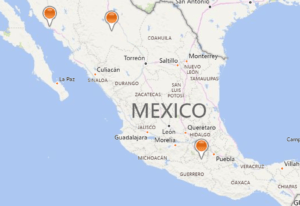 There are several benefits to Ford of manufacturing in Mexico. The country has a relatively skilled and low-cost labor force, is well located geographically to ship to the U.S. or South America, has wide ranging trade agreements, and has government policies promoting exports. [3] There are also an increasing number of Mexican graduates from engineering and technical schools which have expanded the pool of skilled labor. [3] The country’s “maquiladora” program also allows for duty-free importation of raw materials, components and equipment needed in the manufacture of goods for subsequent export. [4]

The future of NAFTA, however, has become increasingly unclear, and may change how Ford and its peers view the benefits of manufacturing in Mexico. The current U.S. administration has highlighted two key areas that may change in the future. The first are changes to the rules of origin. Rules of origin govern what share of a car must be sourced from NAFTA countries (currently 62.5%) to qualify for NAFTA benefits. [6] Either an increase in that share or creating NAFTA country specific portions of that share could add substantial complexity and cost to the supply chain. [6] Alternatively, an import tax could be instated which would entirely change the economics of manufacturing in Mexico for import into the United States. [7] While there are many benefits to manufacturing in Mexico, Ford must be wary of the impact U.S. isolationism could have on NAFTA and the economics of production in Mexico.

In the short term, as a leading U.S. corporation, Ford has a voice it can contribute to the conversation. Ford’s President of the Americas, Joe Hinrichs, has suggested focusing NAFTA changes on reducing foreign exchange manipulation and streamlining safety and other vehicle standards across the three countries. [8] Ford’s former CEO Mark Fields was also vocal about the negative impacts of isolationism and indicated the company was in direct communication with the Trump administration on the topic. [9]

In the medium term, Ford is adjusting its decisions on capital allocation. In 2016, Ford announced it would build a $1.6 billion plant in San Luis Potosi in Mexico to build its Ford Focus model and create 2,800 jobs. [10] That decision came under attack from then-presidential candidate Donald Trump. In 2017, the Company announced it would instead be building the Focus in China, where it could save $1 billion in investment costs. [10] The move underscored the Company’s reluctance to invest additional production in Mexico amidst uncertainty and the increased interest in low-cost manufacturing options outside North America altogether.

There are additional steps the Company could take in the short and medium term to address the isolationism concern. The first would be to build a stronger coalition of companies to support NAFTA. While certain automotive companies have banded together in lobbying efforts, Ford could work to expand this further to incorporate a broad consortium of industries affected by changes to NAFTA. In the meantime, the Company could also continue to focus its North American investments in the United States to protect against changes that could impact the economics of locating manufacturing in Mexico or Canada. In the longer-term, the Company should work to diversify itself away from the United States. In 2016, 45% of Ford’s car sales were in North America versus 24% for the global industry. [11] If the Company can further market its cars in growing international markets, it can reduce the impact and risk of U.S. isolationism on the Company at large. Ford may ultimately be best served by taking a long-term view and focusing on the lowest cost manufacturing locations with the best export conditions with the goal of being competitive on a global basis – even if it means potentially being less competitive in the U.S. market in the short-term.

Questions to consider: What is better for Americans, more manufacturing jobs in the U.S. or lower cost vehicles? Should Ford be investing in Mexico amidst uncertainty with NAFTA? With the potential for major administration changes in the U.S. every four years, how should companies think about the potential for considerable changes in trade policy on their supply chains?

Can Barclays Thrive in a Post-Brexit London?

Local Content Policies: What is the Impact on Construction Firms?

28 thoughts on “Driving into the Unknown: Ford Motor Company and NAFTA”