It is no secret that today’s retail landscape is more crowded and competitive than ever before. Online merchants and specialty retailers have forced consolidation and store closures among traditional big box chains and department stores, with some retailers expected to shutter nearly half of their existing doors in coming years [1]. Amazon, which is redefining convenience and the shopping experience through an ever expanding branded and private label apparel assortment as well as through new offerings like Prime Wardrobe [2], remains the single greatest threat on the competitive spectrum to traditional retail. On the flipside, specialty retailers and boutiques are also capitalizing on consumers’ increasing tendency of eschewing big brands. So what is a department store to do to remain competitive in the face of this shift toward online and differentiated, convenience driven retail [3]? Nordstrom is trying to answer that question, and has begun to do so by investing in inventory visibility across its e-commerce site and brick-and-mortar fleet. 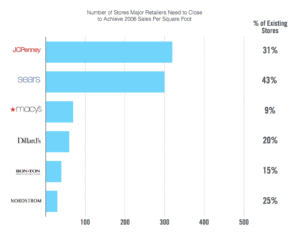 Nordstrom was among the first in the industry to recognize the value of providing consumers with inventory visibility across the entire network of its stores as well as its online platform [4]. In doing so, the company was able to effectively leverage its network of brick-and-mortar locations as mini distribution centers, providing consumers with immediate product visibility and access, and consequently preventing potentially lost sales. While that strategy proved timely and prescient, Nordstrom (and department stores more generally) face a much greater threat going forward as Amazon becomes poised to overtake Macy’s as the largest apparel retailer in the U.S. [5].

What Has Nordstrom Done?

In the near term, Nordstrom has addressed this marketplace shift by connecting the digital and in-store experience with its style boards. This digital-selling tool leverages the company’s core expertise in customer service and enables consumers to receive personalized product recommendations on their phones [6]. The company has also attempted to refresh its assortment by collaborating with other highly sought after brands such as Warby Parker, Goop, and Everlane. Nordstrom has also partnered with key digital influencers such as the popular fashion blog, Something Navy, to launch an exclusive collection with its in house Treasure & Bond brand.

In the medium to long term, Nordstrom has chosen to address the threat of online and specialty retail by increasing investment in differentiated retail experiences such as its value-oriented Nordstrom Rack doors and Nordstrom Local [7], which are small format brick-and-mortar doors that will not carry any inventory, but rather act as style salons for consumers to work with personal stylists to trial and select product for later delivery. Consistent with its historical emphasis on service and convenience, Nordstrom will allow consumers to buy online and pick up in store at Nordstrom Local locations. 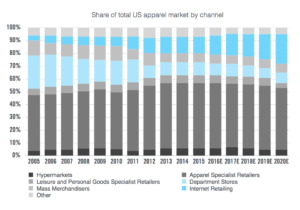 In addition to the steps that Nordstrom has publicly announced, the company should consider other ways in which it can differentiate its retail experience, assortment, and supply chain to improve its competitive advantage. As more well renowned brands like Nike begin to sell on Amazon [8] at the expense of other channels, Nordstrom should proactively seek to partner with some of its top vendors to create a more integrated consumer experience, broader assortment, and flexible inventory model across the entire marketplace, beyond just its own stores and website. One recommendation of how Nordstrom could do this is by partnering with brands to offer a broader (or even complete) assortment of their products on its website via a seamless drop-ship model [9]. In doing so, Nordstrom would be able to offer an enhanced and more competitive assortment at little to no incremental inventory carrying cost, while its vendors would be able to generate additional sales via the traffic Nordstrom generates to its site.

A second potential recommendation would be to partner with some of those same vendors to hold centralized pools of inventory, the logistics and fulfillment of which could be run by either Nordstrom or the vendor, or a third-party logistics provider. This pooled inventory model would have the effect of: seamlessly and strategically broadening the total assortment Nordstrom is able to offer; allowing both Nordstrom and its partner to gather more consumer data on shopping behaviors (which incidentally Amazon is able to do well because of its scale and reach); driving margin expansion through an affiliate based reimbursement model [10]; and lowering aggregate inventory carrying costs across the marketplace [11] by capitalizing on shared consumer and POS data that can drive more informed merchandising and buying decisions.

Practical concerns arise from either proposal: Would partnering with certain vendors preclude Nordstrom from working with others due to data sharing concerns? Do the benefits (e.g. revenue upside) outweigh the costs of the back-end investment necessary to integrate the inventory management systems of Nordstrom and these vendors?

[5] Peterson, Hayley. “Amazon is about to become the biggest clothing retailer in the U.S.” Business Insider. October 25, 2016. Accessed November 14, 2017. http://www.businessinsider.com/amazon-becomes-the-biggest-clothing-retailer-in-the-us-2016-10