What flies and spits fire at the same time? That’s right: airplanes.

Aircraft are major emitters of greenhouse gasses and reducing these emissions poses a challenge to airlines, regulators, and manufacturers. How will Brazilian aircraft manufacturer Embraer react to this changing environment? What steps have they taken to become more eco-friendly and not be left behind in this new competitive scenario?

Why should we care about airplanes? 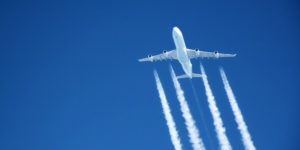 If you ever hopped on a plane and flown across the world to go on that perfect vacation, I’m sorry to tell you that flying probably accounts for a relevant part of your carbon footprint. The average American will generate 19 tons of CO2 in a year [2] – the worldwide average is about 5 tons per year [3], whereas flying round-trip from New York to Europe will generate an effect equivalent to 2 to 3 tons of CO2 per passenger [2]. Commercial flights alone are estimated to produce 700 million tons of CO2 per year [1] – about 2% of total world emissions.

Current levels of emissions originated from flying are high, but estimates are that this number could triple by 2050 [4]. Specific studies point out that the temperature increase caused by aviation alone could be of 0.03oC by 2050 [6]. It comes as no surprise, then, that governments and international agencies have already started suggesting and enforcing regulations on greenhouse gas emissions from airplanes [4] [5].

In a world where emissions are controlled and regulated, aircraft manufacturers that fail to adapt to the new reality might be headed for disaster. On the flipside, producing “greener” planes will provide an edge over their competitors. Companies can achieve that in basically two ways:

Going about achieving these goals requires R&D spend and can be done in-house, through partnerships – with other companies, universities, institutes etc. – or through acquisitions – of either companies or just patents or technologies.

The decision of which strategy to pursue will hinge on the company’s internal capabilities and resources.

Why do we care about a company in “I-don’t-know-where”, Brazil? 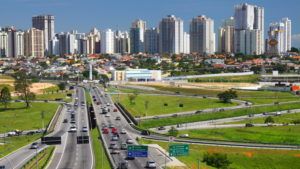 Sao Jose dos Campos is the foremost Brazilian aerospace and defense hub, including the Brazilian Space Research Institute, the Institute of Aeronautics and Space, the Aeronautics Institute of Technology (ITA), defense companies Avibras and Mectron, and the third-largest commercial airplane manufacturer in the world, Embraer [15]. You might have flown in one of Embraer’s airplanes and not know about it [16].

This also happens to be the city where I grew up and where my family still lives. I have also earned my degree in aeronautical-mechanical engineering in the city – at ITA, even though I have never worked in this field.

Embraer focuses on the medium size and executive airplane segments, selling its airplanes to more than 90 airlines in more than 60 countries. It’s safe to say, then, that their clients will be impacted by some form of carbon regulation sooner rather than later.

What have they been doing?

Embraer created its Environmental Department in 2007 [8], and has been investing in energy efficiency and green fuel development, mainly through partnerships. Partnering makes sense given Embraer’s tiny R&D budget compared to competitors: $40 million compared to $3 – 4 billion for Boeing and Airbus [11] [12] [13].

Embraer’s advances in wing design and avionics have contributed to energy efficiency, but, without the collaboration of turbine manufacturers, the impact will most likely be limited.

In 2009, a partnership was established with GE (turbine manufacturer), Azul airlines and Amyris [17] to develop renewable aviation fuel primarily based on sugar cane ethanol, leveraging Brazil’s natural resources – world’s greatest producer of sugar cane – and expertise in this matter (e.g. 92% of cars produced in Brazil ran on both gasoline and ethanol in 2013 [20]).

In 2011, in partnership with GE, Embraer completed flight tests under a variety of different conditions with an E170 aircraft powered by hydro-processed esters and fatty acids [9] [10]. In 2012, an E195 of Azul Airlines successfully flew using bio kerosene made from sugarcane, produced by Amyris [9].

This could be an important step towards emission reduction, given the estimate that “sustainably produced aviation biofuel emits 50 to 80 percent lower carbon emissions through its life cycle than fossil jet fuel.” [7]

In 2012, a partnership began between Embraer and Boeing [9], which has yielded development and tests in biofuel, LIDAR technology and other features such as “ice-phobic” paint [7] by 2016.

As the “underdog” company, with much less money than competitors, Embraer needs to use ingenuity to its advantage, a strategy that has served them well for in the past [18].

[10] MIT Laboratory for Aviation and the Environment,