It’s well documented that climate change will have significant adverse impacts on agriculture, energy usage, ecosystems, transportation, human health and forests. However, water is the crux of the long term adverse consequences of climate change. If we can mitigate the effects of rising temperatures on water, we have the best chance at weathering the global warming storm. Humanity and the world’s ecosystems are dependent on dependable, clean drinking water and enough water to maintain production, transportation, agriculture, and energy. Players in these fields, to include farmers, energy producers, utilities, and manufacturers will need to compete for a finite amount of fresh water in a world with a population expanding by 1.13% per year. A major water issue will be a sea level rise, reducing the quality of fresh water in coastal areas and destructing the infrastructure we use to deliver water to the rest of the world. This will coincide with an increase in runoff and brackish water due to the major changes in natural water cycle that global warming triggers (see exhibit 2). With more mouths to feed and more production to match, we require a method of converting salt water into fresh water. 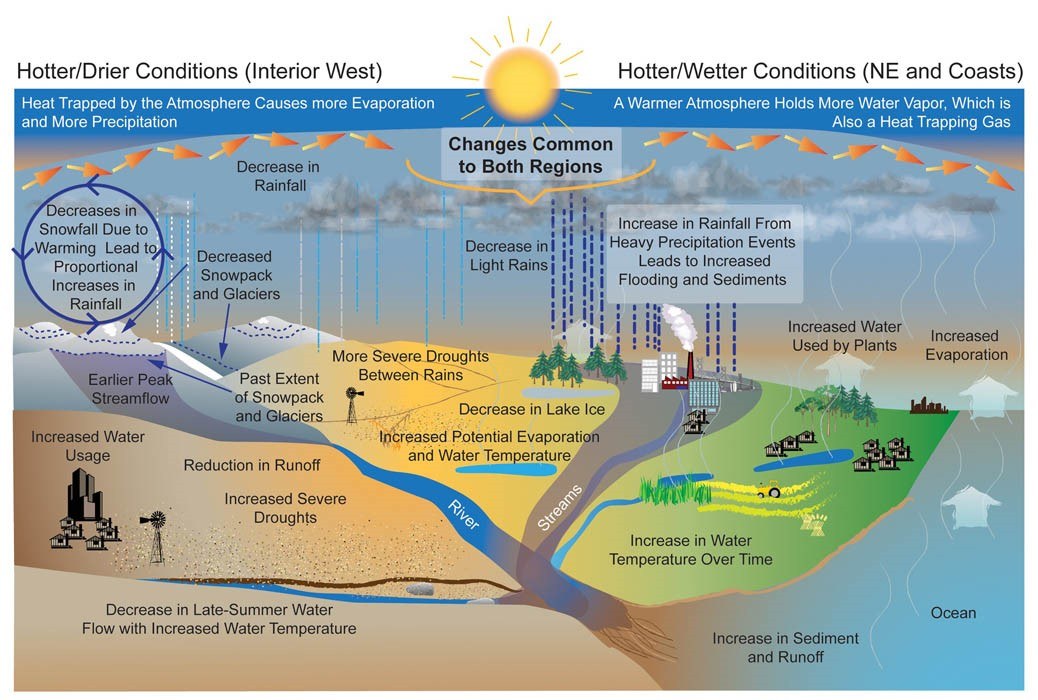 One company that has a huge opportunity to address the desalinization issue is DOW Chemical. DOW already is a huge player in the energy market for climate change. DOW offers POWERHOUSE™ solar shingles as an innovative replacement for ordinary shingles. DOW  STYROFOAM™ is a worldwide leading insulator for  buildings, reducing the costs of heating a home by 20%. Finally, TERAFORCE™ Resin Coated Sand Technology has improved performance and sustainability in oil fracking operations by “utilizing short production cycles and low temperatures so that large volumes can be produced at a single production site” (DOW).

Although DOW has made headway in producing widgets in the energy sector, I believe the company’s innovation is required to further expand into the water desalinization industry as a bigger contributor to create a low-cost scalable product that can allow desalinization plants operate more efficiently on our coasts. DOW offers multiple products that provide reverse osmosis desalination, the process widely considered the only viable option for scalable water desalinization. DOWs product line FILMTEC™ currently offers many products to filter everything from seawater to brackish water. In California, a $1 billion desalinization plant which utilizes the same reverse osmosis technology is under construction in Carlsbad to provide roughly 7% of the drinking water in San Diego. Also, California is vetting 16 additional desalinization projects. These current projects still offer water to consumers at a price nearly double of what they are currently paying for fresh water, and FILMTEC technology cannot help lower this cost currently. How can DOW tap into this market? Are there any advances that can be made to lower the cost?

Researchers at MIT are currently trying to improve the membranes used in separating salt from water in reverse osmosis by using nanomaterials, or materials 100,000 x smaller than human hair. These smaller materials require less pressure to trap salt and allow water to pass through (picture an extremely thin straw blocking salt during the desalinization process).

DOW is in the middle of a merger with Dupont, and I believe DOWDupont will have the scale and resources to find the solution to our coastal water’s biggest question: can desalinization make economic sense to preserve the world’s drinking water in our coastal regions?

5 thoughts on “DOW Chemical: The Next Night’s Watch? Desalinization is Coming…”