Machine learning has taken the world by storm in recent years, and the asset management industry has been an early adopter, leveraging incredible amounts of data to increase the efficiency and performance of both their funds as well as other intra-office functions. On the quantitative investing side, companies specifically use machine learning to look for signals that can give them even the smallest edge over their competitors and search for patterns that they can automate reactions to or even predict outright. At BlackRock, the Scientific Active Equity (SAE) group is doing just that, and they have quite the numbers to back them up: in the last 5+ years, 93% of SAE assets have outperformed their benchmarks1. In comparison, only 11% of BlackRock’s traditional stockpicker-managed funds have attained alpha over a similar period2. 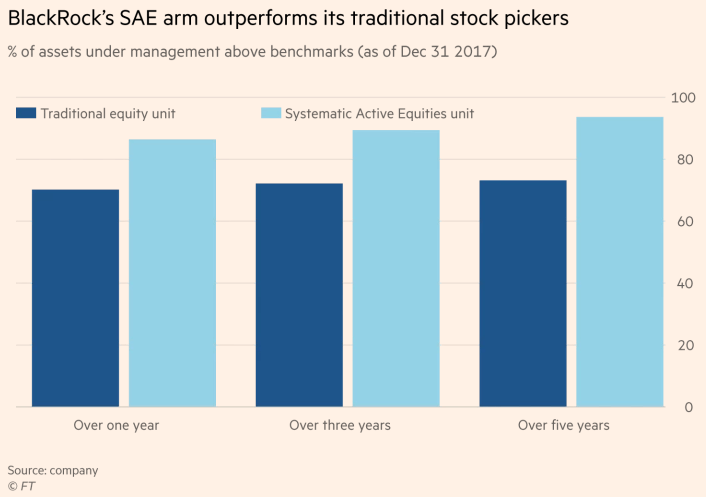 Given this, it’s no surprise that BlackRock is shifting a significant amount of funds over to its SAE arm. With more than 30 PhDs in the team, the group’s product and process development heavily borrows from academia. Analysts propose investment theses and other members, known as “referees”, spend a week trying to “demolish” it. If the idea survives, an approval board determines what weighting it gets among its library of signals, which favors newer ideas over older ones3. An example of such a signal is monitoring employee reviews online. Instead of relying on Fortune’s annual “Happiest Places to Work” article, an algorithm can continuously scan posts on Glassdoor to see if employee satisfaction at a company is trending positively or negatively, which happens to correlate with stock returns, and reallocate funds appropriately4.

However, BlackRock isn’t operating in a vacuum – every player in the financial services industry has invested in machine learning by now. In order to stay competitive, BlackRock has taken a three-pronged approach.

First, BlackRock has created a new integration group initially consisting of 12 “centaurs”, or people with hybrid quant-traditional investing backgrounds, and placed them around the firm to help immediately spread SAE’s expertise. This knowledge transfer will lead to SAE-inspired products throughout BlackRock, transforming the wider business as a whole5.

Second, to diversify beyond just equity investments, BlackRock, like many other large financial companies, has invested heavily in new startups that also utilize machine learning. For instance, BlackRock was the first major player to acquire a roboadvisor when they purchased FutureAdvisor in 20166. They also invested heavily in Personal Capital, an online personal wealth management platform7. Together, these two companies give BlackRock access to retail customers, an entire market that they previously had little exposure to aside from their ETF business.

Finally, BlackRock is looking to underscore its commitment to machine learning research and further solidify its position as a technology leader in the financial services industry by establishing the “BlackRock Lab for Artificial Intelligence” in Palo Alto, CA8. Led by Stanford professor Stephen Boyd, the Lab is aggressively hiring, attempting to attract top candidates in the field before they take positions at other finance and tech companies.

Together, this 3-part strategy has set BlackRock up in a solid position to remain at the forefront of machine learning in the financial services industry. Still, there is more the company could do, including potentially moving more funds or other products over from their active business to SAE. Over the past 6 years, almost $30 billion have been taken out of those traditional active funds, sending a clear signal that investors are losing faith in them9.

At the same time, BlackRock needs to remember that machine learning is not infallible. Though it has worked well for SAE so far, machine learning algorithms are only as good as the humans that code them and the input that they receive, and they are also capable of acting on false positives or making incorrect correlations out of noise10. These actions can then potentially impact the markets, especially given the immense amount of money that BlackRock manages (almost $7 trillion!)

Going forward, BlackRock will need to decide how to go about finding that balance between man and machine. While algorithms can “think” faster than humans, there is still a certain degree of creativity that only humans have today. How can they determine how far they can go in terms of expanding SAE at the cost of other forms of management? And how can they ensure that their machine learning approaches are not falling prey to algorithmic bias and potentially impacting global markets?

Medtronic Must Continue to Invest in Additive Manufacturing

Payment Fraud: The Hidden Cost of Doing Business and How First Data is Using Machine Learning to Protect Merchants from Fraud Losses

Student comments on Do we even need humans in asset management anymore?