From the favorite and simultaneously infuriating alarm that starts our day to the last tweets or texts that end it, our smart phones have a ubiquitous presence in our lives. Even when we think we’ve final 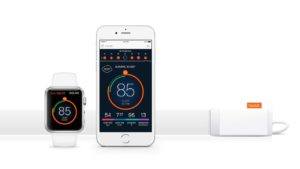 ly broken the spell as we eventually slip back into unconsciousness, our phones are still hard at work keeping track of our every move (or lack thereof) with the help of Beddit.

Beddit, using a hardware device coupled with a smart phone software interface, attempts to data mine while you dream.

Considering sleep occupies approximately one third of our entire existence, it was only a matter of time in today’s data driven and digitized world that we would eventually start tracking it. This inevitability, however, is not devoid of rationality and, more importantly, necessity. Just within the last year, the Centers for Disease Control and Prevention (CDC) identified sleep insufficiency as a public health problem that is directly linked to automobile accidents, industrial disasters, and medical or other occupational risks [1]. Apart from the societal risk, the Institute of Medicine discovered a relationship between poor sleep and the likelihood of a person to suffer from a chronic disease such as hypertension, diabetes, depression, and obesity as well as cancer, increased mortality, and reduced quality of life and productivity [2].

Not surprisingly, health professionals consider sleep one of the 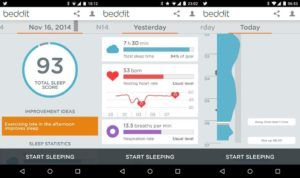 three fundamental pillars of a person’s overall wellbeing. However, when compared to the other two pillars of nutrition and fitness, sleep tracking and overall awareness have lacked exposure and traction in the market.

Unlike nutrition and fitness that primarily involve conscious decisions, monitoring and then also improving sleep is a different, more complicated challenge. Many health care professionals agree that current sleep troubles are inherent to today’s world of data driven and caffeine induced lifestyles which is further exacerbated by blue lit smart phones that disrupt a person’s natural circadian cycle [3]. By using a bit of the “hair of the dog” philosophy, Beddit attempts to tackle this problem and track sleep through your phone by utilizing an ultra-thin sensor that lies under the bed sheets. This device monitors multiple data points including heart rate, sleep duration, sleep quality, snoring, and sleep environment. The data then syncs to an app on your smart phone via Bluetooth and can be aggregated and analyzed so that you can begin to understand how effective or troubled your time in unconsciousness actually is [4].

This awareness of a prior unknown can have far reaching health implications and could potentially and drastically improve the quality of a user’s life. Undiagnosed problems such as restlessness and sleep apnea can get discovered, and people can uncover, using trial and error, their unique and optimal sleep environment. Beddit is also working with sleep specialists to update their sleep coaching interface to offer users recommendations on how they can improve the quality of their sleep and interpret the data that their device is collecting [5].

Compared to other sleep analytic tools like FitBit, which has tried to couple its wearable fitness tracker with sleep monitoring, Beddit doesn’t depend on wearable technology which some users could find cumbersome or uncomfortable while sleeping. Also, unlike other systems that just use their smartphone’s embedded sensors, Beddit’s separate, unnoticeable device claims to be more sensitive and accurate.

One weakness of Beddit’s operational model is its one dimensionality and scope. More sophisticated, clinical sleep 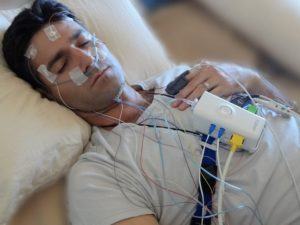 trackers utilize polysomnography (PSG) that measure brainwaves (EEG) and eye movement (EOG) along with several other biological data points [6]. Although it would be difficult to replicate in a home setting, offering an optional wearable headband or hybrid eye mask device could supplement the data already provided by the movement and heart rate sensor and provide a better diagnostic tool for the user or a health professional.

Given the trajectory of big data and monitoring technology, I think we’ll eventually see a consolidation of tracking devices, both wearable and passive, that will monitor a user holistically throughout the day and aggregate multiple biological and environmental data points into usable information that highlight optimal or unhealthy behaviors. This data could then eventually be wirelessly transmitted and provided to a user’s own PCP who could be alerted of deteriorating conditions or symptoms that require a pressing medical need or intervention. Imagine the possibility of an automated medical secretary calling you in the middle of the night to preemptively alert you of an impending heart attack. Providing more data naturally sacrifices privacy, but the rewards may outweigh the risks.

You may be able to sleep more soundly at night knowing that your smart phone is always watching (just check your Beddit app to verify when you wake up).

5 thoughts on “Do Android Phones Dream of Electric Sheep?”