For a long time, movie-making has been viewed as a very risky, unpredictable enterprise: you can have a blockbuster one day and a flop the next, with very little visibility to distinguish the two a priori. A number of companies in the industry have attempted to “smooth” this volatility through the use of franchises – derivative works (sequels, spin-offs, merchandise etc.) which attempt to ‘stretch’ the power of an initial hit. The approach was pioneered in part by George Lucas, director of Star Wars, who famously traded his directing fee in exchange for the licensing and merchandising rights, a deal which cost Fox Studios billions. No-one, however, has been able to harness the power of this franchise approach, coupled with marketing muscle and cross-channel leverage, with the same level of success and consistency as Disney. 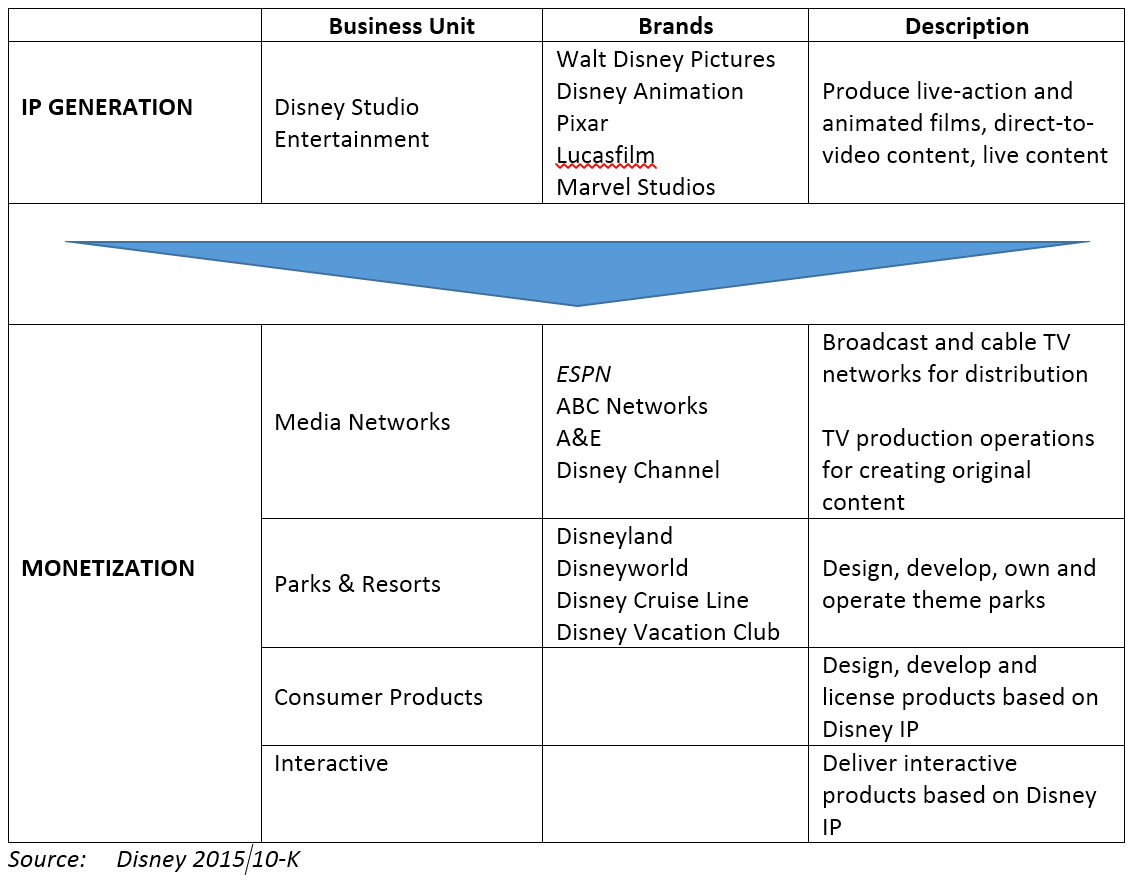 The central tenet of Disney’s operating model is the ability to develop unique intellectual property, and then monetize it across a variety of platforms. As described in a WSJ article (quoted below), Disney is very deliberate in its approach to producing and monetizing content: no production is thought of as a “one-off”; instead, every opportunity is carefully analyzed with an eye towards monetization across every Disney business unit.

To keep executives focused on the biggest hits, Mr. Iger [Disney CEO] has tied the majority of their compensation to the performance of Disney as a whole, rather than individual businesses.

Mr. Iger decides what the company’s top franchise priorities are each year, sending a powerful signal to Disney’s 180,000 employees in offices, studios and theme parks around the world.

“Once that’s done, a switch is turned and off the organization goes,” he said in an interview.

Disney has worked hard and spent a lot of money to build out its underlying IP creation engine. As described in the book “Creativity, Inc.”, Disney Animation Studios, once an animation powerhouse, had lost its edge in the early 2000s. Pixar, with its unique technology and a superior creative process, dominated the new world of 3D animation. In 2006, seeing the writing on the wall, Disney acquired Pixar for ~$7 billion, setting off alarm bells on Wall Street. Disney then proceeded to cross-pollinate key technology, principles and people from Pixar across the organization. For example, John Lasseter, former head of content, was named Chief Creative Officer of both Walt Disney Animation Studios and Disney Imagineering, the group in charge of designing rides and attractions at Disney Parks.

The culmination of all this, and a great case study for the power of Disney’s franchise approach, was the launch of Frozen in 2013. The tried and tested Disney formula of “cute characters + catchy songs” created a box office hit, and Disney promptly kicked its cross-channel approach into high-gear to propel a successful movie into a cultural phenomenon: 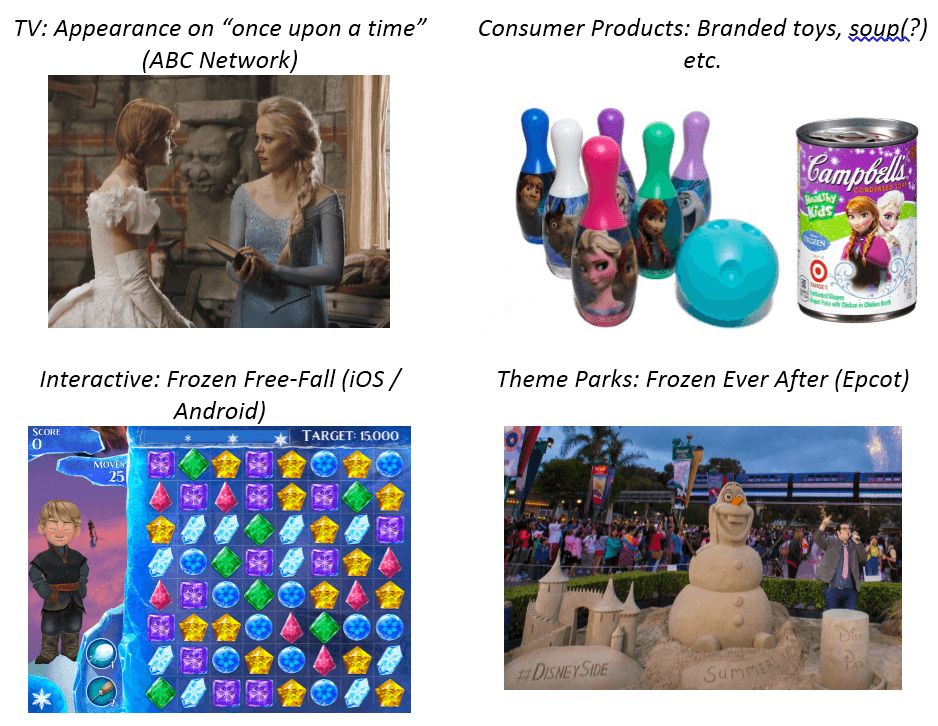 Since buying Pixar, Disney has acquired Marvel Studios ($4 billion) and Lucasfilm ($4 billion) to further augment its IP engine. Marvel’s “Avengers” franchise, consisting of 12 movies released so far and a development pipeline of 10 more, has been accompanied by unfathomable amounts of merchandising and cross-channel revenue generation, including two TV shows (Agents of SHIELD, Jessica Jones). Now, with the release of the new Disney-backed Star Wars movie a few weeks away, we appear to have come full circle in the realization of this model.

Jet.com: Bring it On, Amazon!

Chick-Fil-A: A model that has us all EATING MOR CHIKIN!