In the past 24 months, oil and gas companies have gone from soaring profits to crippling losses.  Facing intense pressure to increase operational efficiency and drive margins, they are increasingly turning to digital technology.  As noted in a recent Strategy& study, “the term Digital addresses the confluence of data, machines and people that form the basis of Internet of Things (IoT) which can ultimately create several opportunities: improve asset reliability, boost throughput and optimize field recovery.”[i]

One oil and gas major fully embracing this change is Royal Dutch Shell, which announced in 2013 its ambitious plan to become “the most innovative energy company in the field of digital”.[ii] 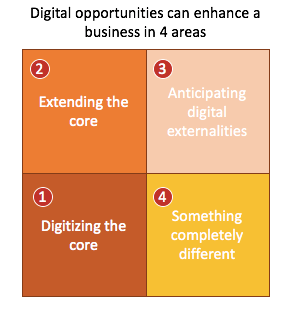 When thinking about digitisation, four types of opportunities can enhance Shell’s business:

This is where Shell has made the most progress, embracing digital across the company’s value chain:

Although less advanced than their core activities, Shell is looking at opportunities to extend their B2B and B2C offers. Their venture capital arm, Shell Technology Ventures, has recently invested in Sense Labs, which developed a home energy efficiency device for consumers. The unit connects to the home power supply and measures energy consumption of all appliances and devices, sending real-time updates to apps, allowing consumers to reduce energy usage and costs.

Where Shell is lagging behind: adapting to external threats and developing different businesses

Despite the moves made in their core business, there is still a huge gap between what Shell could be doing and what they are doing. A recent survey completed by the Boston Consulting Group showed Energy companies to be ‘laggards’ when it came to adoption and accessibility to digital technology[viii].

For example, what is stopping Shell from developing a ‘fuel on demand’ platform, which refuels cars wherever they are parked? It is possible that Shell is reluctant to make this move, as it will cannibalize their existing retail business…but that doesn’t mean no one else will.

Shell could also look to expand in a completely different way, using learnings from other industries. Qantas for example leveraged data analysis and mobile apps to set up an insurance program called Qantas Assure, which using frequent flier miles and points from fitness trackers. Qantas benefits because they are able to monetize unused air miles’ inventory, and their customers become even more loyal.[ix] Perhaps Shell could do something similar with Shell rewards?

Shell is taking large leaps towards digitization, but there is still a long way to go. As a recent article for Forbes stated: “Getting by with dated and fragmented technology will no longer work for an industry that is experiencing massive shifts due to heightened market pressures, efficiency demands, and the ever-increasing need for new technology.”[x]

Can you do your taxes faster than you prepare for a FIN 1 case?

Student comments on Digitization in Oil & Gas – is Shell a Leader or a Laggard?