For the first TOM challenge on climate change, I wrote about Chipotle and the global-warming-induced potential for guacamole shortages. For our second TOM challenge, I’m choosing to write about the effects of digitization on the restaurant industry. You may think I’m simply obsessed with food (not untrue), but in reality, the effects of the digital age have been stark and transformative for the restaurant world.

These effects manifest themselves in at least two major digital developments: the rise of reviews, and reservations. Or in other words, the “two digital R’s of the restaurant business” (copyright: me).

The interesting thing is that neither of these developments is purely good or bad for restaurateurs.  Each has benefits and pitfalls galore. Let’s take a deeper look: 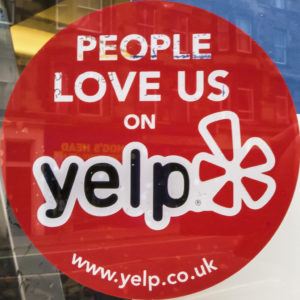 In 2004, Jeremy Stoppelman and Russel Simmons released Yelp, a website where real people could share reviews and ratings of restaurants they’d visited [1]. Prior to Yelp (and the variety of similar websites that came out around the same time), diners relied on word of mouth, advertisements, newspapers, and even yearly restaurant review-books like Zagat to figure out what restaurants were worth trying or better to skip. But thanks to new technology, anyone with access to the internet could now access and contribute to a massive repository of online reviews.

Yelp could have a very beneficial effect for the restaurant owners. If you were running a new restaurant or one that was in a tough place for customers to find, positive reviews on Yelp could generate tons of interest, and ultimately new customers you may not have been able to acquire otherwise.

But the chance of upside for restaurant owners also came with serious potential risks. HBS professor Michael Luca found that each “each ratings star added on a Yelp review translated to anywhere from a 5 percent to 9 percent effect on revenues”[2].  So, negative reviews could have disastrous effects on income. As a result, restaurateurs who already had a host of operations issues on their plates (pun intended), had to take on yet another operational task of dealing with and responding to bad customer reviews in a way that minimized the damage to their reputation [3].

Moreover, since reviewers tended to weight customer service quite heavily in their reviews [4], restaurants couldn’t simply rest on the quality of their food. They needed to make customer service an intrinsic part of their value proposition.

Most problematically, many business owners reported that Yelp basically extorted them, offering (in not so many words) to make bad reviews go away with increased ad spend [5]. Given the revenue impact of reviews, many restaurateurs may have felt compelled to spend money with Yelp.

Yet, again the new digital evolution didn’t come without drawbacks. Customers intending to make a reservation at your restaurant may see another restaurant on the OpenTable website that catches their eye and be distracted away. Moreover, OpenTable doesn’t do this today, but who’s to say that in the future they won’t start promoting paying restaurants to customers while they’re already making reservations for another eatery? Finally, as a restaurant owner maybe I’m already perfectly content with my reservations system. But since many customers are now using OpenTable, I have to do extra work to integrate with the new system to avoid losing existing and potential customers.

What should restaurateurs do?

In my opinion, restaurateurs have no choice but to embrace the trends of digitization going forward. Consumers increasingly demand convenience and information (e.g. online reservations and reviews) and restaurants that try to combat these trends are likely to get left in the dust. Indeed, I think restaurants should go even further to incorporate the benefits and customer value propositions that digitization offers. For example, I think savvy eateries over the next few years will do things like integrate apps like SplitWise or Venmo to remove the headaches of splitting the check, specify hashtags for their restaurants so customers can share their experiences on apps like Twitter and Instagram, and myriad new ways to engage with customers and improve their experiences, both inside and outside the restaurant.

Does Verizon have the horsepower to overhaul the trucking industry?

Student comments on Digitization Gets Cooking in the Restaurant Industry