The Boston Police Department (BPD) and its peers create value by protecting and improving public safety – they enable value creation and capture by a diverse set of other actors.[i] To deliver on this customer promise, BPD traditionally leveraged the standard policing operating model – (1) incident identification, (2) incident response, and (3) incident analysis/prediction – with a heavy emphasis on humans as sensors for identification (i.e., police officers, citizens) and largely relying on intuition (informed by basic data analysis) to determine incident response and drive incident analysis/prediction. Digital sensors, the data they capture, and new capability to analyze that data (and combine it with other sources of data) are turning the traditional model on its head:

(1) Incident identification: Traditionally, incidents have been identified through unreliable call-ins (e.g., 911) and radio-ins from police patrols.[ii] Several digital technologies are replacing humans as sensors, removing the necessity for call/radio-in, and providing deeper initial incident understanding. Foremost among these is ShotSpotter, employed by the BPD and several other large city PDs; ShotSpotter uses a system of microphones deployed throughout a city (e.g., on lightposts) which detects gunshots, triangulates their origin location, and rapidly feeds it to BPD’s Real Time Crime Center and officer squad cars/mobile devices – nearby security cameras, ATM cameras etc. can be quickly be trained on the location to provide officers with ingoing situational awareness (e.g., suspect identification, license plate reading).[iii] Additionally, any repeat offenders wearing GPS tracking bracelets can be quickly identified if they are in the area of the shot.[iv] Shotspotter (and other passive sensing technologies) ensure that incidents don’t go unreported and lead to faster, more informed police mobilization/arrival on scene.[v] 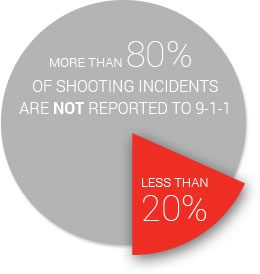 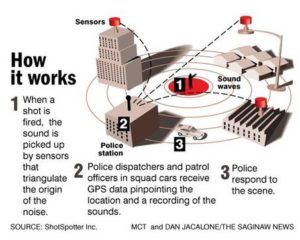 [2] Incident response: Digital technology is transforming the safety, effectiveness, and accountability of on-scene response. Traditionally, officers communicated by keyed radio, making it difficult to quickly convey developments (e.g., officer downs). New digital technologies have the potential to ensure that officers get help more quickly when needed and to enable coordination between multiple officers responding to complex incidents: wearables track officers’ vitals/stress indicators and can signal when an officer/canine unit is under duress, passive alcohol/drug sensors inform whether offenders are intoxicated, sensor-enabled gear-belts notify when officers draw a weapon, body cameras provide live views into the officer’s/canine’s surroundings and identify potentially threatening shouting/ loud voices, drone mounted cameras provide an overhead view, and officer specific GPS allow for coordinated tracking and deployment. Additionally, these technologies collect diverse data on the quality of the response – both operational quality (to inform later training) and legal quality (to ensure that offenders’ rights are not violated/ officers cannot be unfairly accused of unprofessional actions). Additional technologies are also enhancing response by enabling more effective tracking of offenders should a pursuit occur during incident response. Car/hand launched GPS tracking darts are being deployed early in police vehicle pursuits to reduce the risk associated with high speed chases.[vii] More controversially, IMSI-catchers (devices which essentially simulate cell towers in order to get all nearby cell phones to identify themselves and their locations) are being used to identify where suspects are hiding.[viii] Incident response has always been fraught with danger for officers, offenders, and civilian bystanders – these digital technologies have the potential to enable better management of the risks associated with response.

[3] Incident analysis/prediction: Incident identification/response in a digitally enabled age generate significant data, which can be combined with other data sources (e.g., social media) to guide live response and to predict where/when crimes are likely to occur in the future. Data analytics firms (e.g., Palantir, PredPol) are combining these disparate data sources and setting up repeatable analyses that help the BPD better anticipate where/when incidents are likely to occur and to guide police action within a given incident response (e.g., predictive heat maps, maps of hate speech tweets).[ix][x] Combination of data sources (including unconventional ones) and cutting edge data analytics is a big step forward from a traditional model which operated largely on ad hoc data analysis and intuition.[xi] 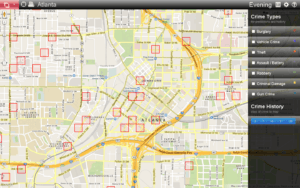 While the BPD and its peers have made early strides leveraging digital technology to improve their operating models more can be done: opportunities to embed digital incident identification sensors in new city infrastructure (e.g., parking meters, smart pavement) should be thoughtfully considered and data analysis tools – especially around incident prediction – should be invested in and built into standard operating procedures/workflows (so they are more than expensive toys). [xiii] Additional will be needed to deliver on an inevitable expansion of BPD’s customer promise: protecting/improving public safety in the digital realm. Several police departments, including recently Newark’s, have seen their increasingly digitally-enabled operating models temporarily undermined by cybercrime/sabotage. [xiv] BPD and its peers will need to harden their own systems against cybercrime, and develop the digital tools to identify, respond to, and analyze/predict cybercrimes affecting the broader citizenry.

[i] BPD states its mission as “working in partnership with the community to fight crime, reduce fear and improve the quality of life in our neighborhoods.” http://bpdnews.com/mission-and-objectives/

[ii] Call-ins are not always made in a timely fashion (and sometimes not made at all, even for the most serious incidents e.g., shootings, only 20% of which are reported. ShotSpotter. http://www.shotspotter.com/law-enforcement

[xi] “Don’t even think about it” Economist. http://www.economist.com/news/briefing/21582042-it-getting-easier-foresee-wrongdoing-and-spot-likely-wrongdoers-dont-even-think-about-it

How is big data changing GE’s oil and gas business?

Nordstrom: introducing customers to the future of multi-channel retail