Digitalization has brought radical changes to the music industry. At a supply chain management standpoint, digitalization removed raw materials, such as CDs and LPs, and transformed traditional distribution channels to online thus making substantial cost savings. It also increased the number of suppliers, songwriters and artists by offering easy access to market with digital audition programs.

On the other hand, digitalization had negative impacts on the music industry. One of the concerns was that digitalization lowered the topline, mainly because of the low quality of products.

With the constraint of storage and bandwidth, online distributors compressed and minimized the data size of products. Streaming and internet radio services provide the quality of less than 160 kbit per second, which is significantly lower than average 1,411 kbit per second of CDs[i]. During the distribution, high-frequency parts were lost or ignored, distorting the artists’ original intention. Consumers also preferred efficient and small pieces of music as they now listened through smartphones rather than large sets of speakers and amps. Most consumers chose convenience over quality. How can we bring back the quality to the music industry again? 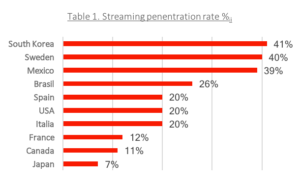 SM Entertainment(“SM”) is the most leading music label in South Korea with a business presence in Japan, China, Europe and the United States. SM is well known for a variety of K-Pop artists. The company is listed on KOSDAQ, the Korean version of NASDAQ, with market capitalization of USD 0.8 Billion.[iii]

SM approached the problem with behaviors of music consumption. In the short term, SM provided high-end audio devices to help customers experience their music differently. They collaborated with smartphone and audio makers and bundled products with the music album. To illustrate, SM closely worked with Astell & Kern, the high-end audio maker[iv], and offered the Super Junior’s album exclusively for the high-resolution music player[v]. Consumers were also given free streaming music so they could experience the differences between the original sound and the low-quality MP3 sound.  Products were immediately sold-out through Asia and SM keeps seeking collaborative opportunities to spread high-end speakers.[vi]

In the medium term, SM established its own e-commerce platform, providing high-quality songs and 4K music videos[viii]. SM had asked streaming players, such as Melon and Spotify to offer lossless music, but they delayed the adaptation, due to low demands and the high cost of storage and transmission. SM decided to supply FLAC with quality equivalent to CDs, through their own website and USB files through retail stores. SM has offered 420k songs through FLAC among 8 million MP3 songs until Dec. 2016. To increase the traffic, SM differentiated the release dates, giving exclusivity to limited music from their sites. Chen, Chinese member of Super Junior, released his new album, SM THE BALAD, in 2014 at the SM platform and sold approximately 300 thousand songs during the exclusive periods.[ix] Loyal fans purchased the music from SM’s website and initiated a discussion group within this website. They were now more engaged in the interaction with artists and other supporters, becoming the customer review similar to that of Amazon. It had never existed in the streaming music services, where individual consumers listened to music passively, according to the curation and recommendation.[x]

SM focused on building a direct channel to consumers and enhancing the quality of last mile equipment. Despite such efforts, most consumers still prefer to listen to convenient low-quality music. I believe that expanding distribution channels would be beneficial to the SM strategy.[xi]

I recommend SM to infiltrate television content channels. Contrary to the audio equipment, TV technology has developed rapidly. Key drivers are reliable manufacturers, such as Samsung and LG[xii], and innovative content providers such as Netflix and Disney. Nowadays televisions are equipped with not only a 4K screen but also high-definition sound, which could be the most appropriate channel to listen to music. Imagine people always turning on the television to play background music. SM could contract with Netflix to supply 24/7 music channels or on-demand music apps and stations. Smart television may be the perfect channel that brings high-quality music to customers.[xiii]

Smart television, with high-definition screen, also can afford to bring live concerts to living rooms. Once visitors sense the difference of telepresence and by combining their personal experiences with the thought that ‘music is a critical part of life’. Fans would pay more attention to high-quality music and come to the concert, where has the most advanced audio system. Smart television could be the gate way to the live music.[xiv]

But still, how can the music industry recapture the topline?

Humans vs. machines – who will manage the factory of the future?

How HMG makes an (olive) oil and water relationship work