Today, there are over 65 million displaced people–the most since World War II— and nowhere is the refugee crisis direr than Syria [1]. Over half the country’s pre-war population has been forced from their homes; some 5 million have fled the country altogether [2].  Neighbors have absorbed the vast majority: Turkey has close to 3 million Syrians, while one out of every four people in Lebanon is now a Syrian refugee [3] [4].  Yet, international attention focuses disproportionately on the migrant flows to Europe.

The journey to Europe is dangerous, tragic, and unprecedented: it’s the first mass-scale migration to take place in a digital age with virtually ubiquitous smartphone access. For reference, pre-crisis Syria had 87 mobile phones per 100 citizens [5]; one study found that 86% of Syrian youth in a Jordanian refugee camp owned mobile handsets [6]. Mobile computing power transforms reporting—every migrant can tell their story in photos, videos and texts—as well as their prospects for success and even survival.  Access to technologies like Google Maps and instant communication apps enables a viable route through Europe, a rescue call to the Coast Guard, or a compass to guide your swimming when a boat sinks [7] [8].

Despite the dangers—3800 people died in the Mediterranean over the first 10 months of this year [9]—insatiable demand for passage has given birth to pragmatic, ever-evolving suppliers. The risks and rewards of digitization shape these smugglers’ strategies.

Human smuggling into Europe has become staggeringly big business. Per Europol, the industry generated between $3 and $6 billion of profit in 2015; 90% of asylum-seeking refugees paid for a criminal enterprise’s services [10].  Overall annual demand for passage to Europe only grows as economic opportunity wanes and violent conflict soars across the Middle East and North Africa.

Despite steady demand growth, there is tremendous variability in terms of flow and price.  Seasonality is a factor: seafaring routes spike when temperatures are milder (by some accounts, prices can surge 30-50%) [11], [13].  Likely the largest distortionary effect is government intervention.  Money spent deterring refugees with walls or border patrols doesn’t seem to make a dent in overall demand—it often just shifts the bottlenecks and reallocates migrant flows to new paths of least resistance that are increasingly clandestine and unsafe [12]. The overhang of illegality drives up costs; for example, in Turkey, smugglers can face prison sentences of 1-30 years and up to $15,000, upping the price that smugglers demand [13].  Even humanitarian triumphs like Germany’s admission of 1 million new refugees can send demand surging [18]. 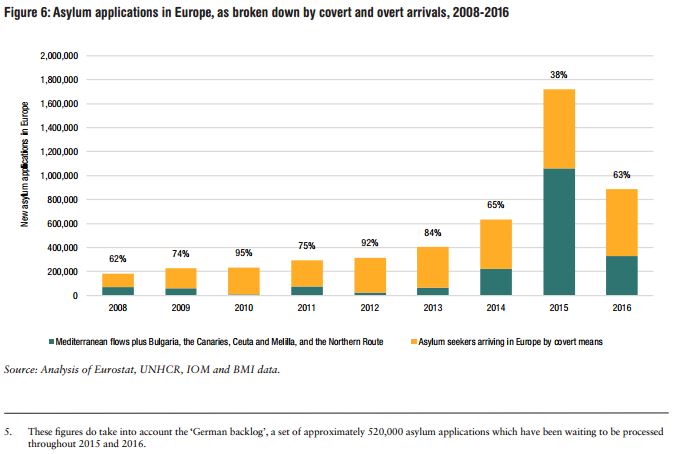 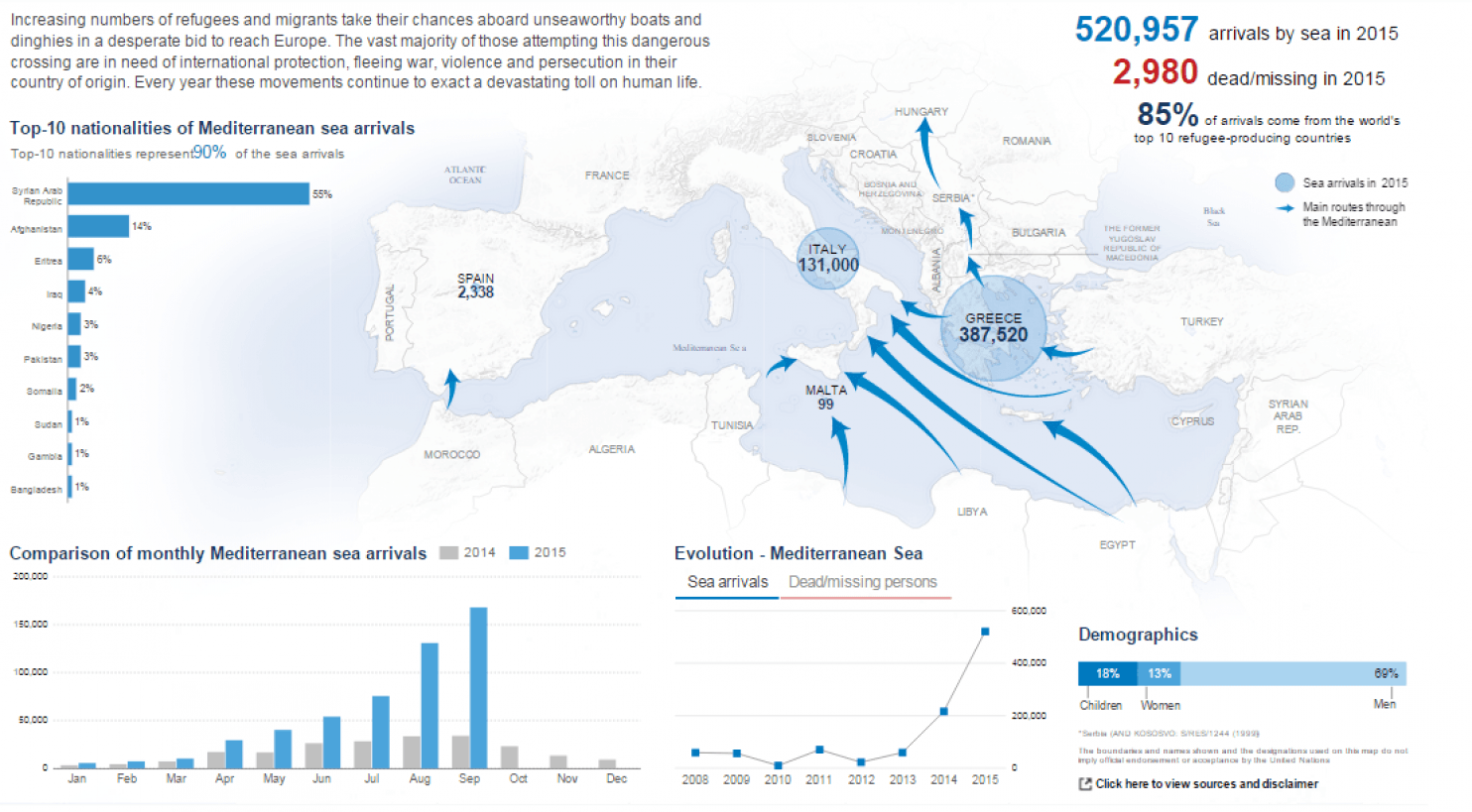 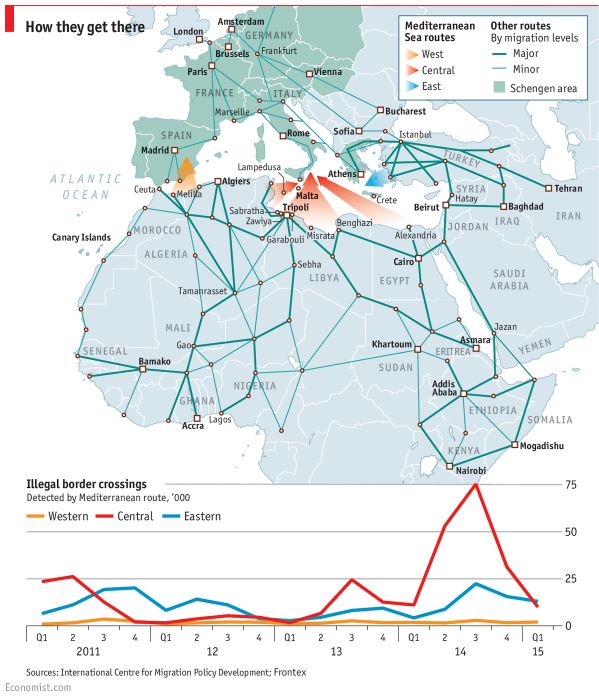 Against this backdrop, what are the biggest operational impacts of digitization?

Refugees use communications apps like WhatsApp, Viber, Skype and Facebook to communicate in real time; they even share GPS coordinates so others can monitor their paths [17]. This strips out information opacity and lag time in a manner that has a massive network effect on migration routes—the more successful routes tend to exponentially receive more migrants [11]. It can also shorten the lifespans of these paths: governments can leverage this transparency to crack down on the most popular routes or smugglers, triggering the cycle to start from scratch [18].   Smugglers need nimbler, decentralized operations to quickly capitalize on shifting chokepoints and stay one step ahead of government crackdowns. 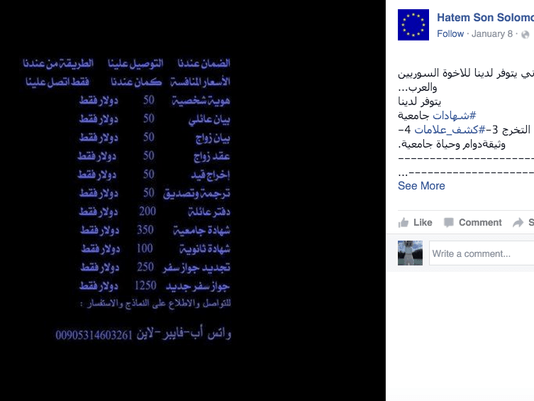 Migrants’ ability to crowdsource other refugees’ best practices motivates more of them to go it alone and disintermediate the smugglers (at least for segments of the journey that don’t require vehicles) [17]. Says Mohamed Haj Ali of the Adventist Development and Relief Agency in Belgrade: “Traffickers are losing business because people are going alone, thanks to Facebook” [17].    Refugees can quickly vet smugglers’ offers based on denser feedback; this quality control and price visibility pressures smugglers’ profitability.

Digitization clearly reduces the information gaps upon which smugglers can thrive.  But in such a complex system, it’s hard to determine whether digitization is net positive for refugees, smugglers, both or neither.  The cause-effect is not straightforward; for example, pricing pressure on smugglers can incentivize them to use cheaper, life-threatening boats [18].

Yet, the central truth is simple and tragic: demand isn’t drying up. As long as turmoil rages across MENA, people will flee their homes and risk everything in hopes of a better future. 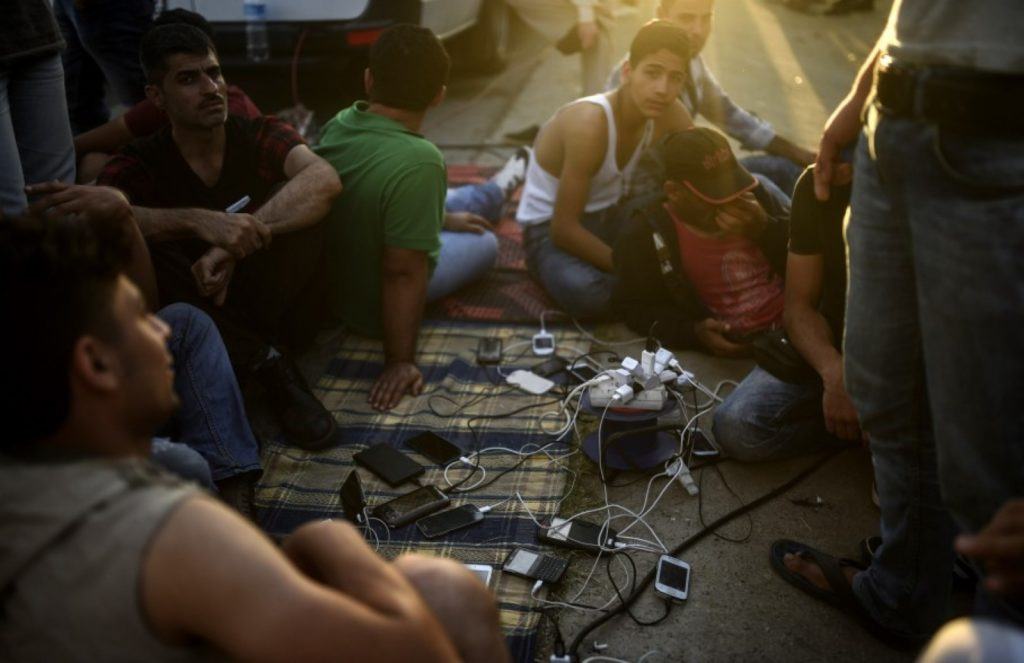 (Note: For the sake of brevity, this post’s statistics and terminology shift between referring to Syrian migrants and the overall refugee flows to Europe, of which Syrians make up just one part.  This is largely to capitalize on the best sourcing, which can come from either bucket).

–“The Office of the United Nations High Commissioner for Refugees has distributed 33,000 SIM cards to Syrian refugees in Jordan and 85,704 solar lanterns that can also be used to charge cellphones.

“For the U.N.H.C.R., there is a shift in understanding of what assistance provision actually is,” said Christopher Earney of the refugee agency’s innovation office in Geneva.”

—‘Despite the dire conditions that many Syrians are facing, Maitland said that upon arriving at the Zaatari camp in Jordan, the researchers discovered a vibrant and resilient community. Children in the camp are formally educated and able to receive a Jordanian high school diploma. In addition, about 3,000 businesses have been set up in the camp, including barber shops, wedding gown rentals, vegetable stalls and even a travel agency and pizza delivery service. Use of information technology by the humanitarian organizations is expanding rapidly, including biometrics, electronic vouchers, and social media. UNHCR maintains a database of iris scans of all refugees, who purchase food using UN-issued debit cards containing their monthly food allowance at point-of-sale terminals at two grocery stores in the camp. UNHCR also operates a Twitter account for the camp, providing updates and human interest stories. Following the camp’s Twitter feed has allowed the research team to keep up with timely news, including the past winter’s snow storms.’

–“Information access has to be in every humanitarian toolkit

in the future, so we’re not struggling to provide basic things like Internet access and charging stations” —  Kate Coyer, director of the Civil Society and Technology Project for the Center for Media, Data and Society at Central European University in Budapest.

Lists/Examples of the Private Sector Making an Impact:

We know you looked at that ugly sweater: Euclid Analytics, in-store tracking and the narrowing of the online-offline gap

Student comments on “Digital Refugee”: The Impact of Technology on Syrian Migrants and The Smugglers Who Profit