It’s another busy morning for Fikri Gustin; he hasn’t had a slow one since starting up Martabak Monkey – a pancake restaurant based in Bandung, Indonesia two years ago.[1] There is something very unusual about his restaurant: it has no tables, chairs, menus, or storefront. In fact, the only thing that resembles a restaurant is his small kitchen with two gas stoves. Operating straight from home, green-jacketed ‘riders’ line up in Fikri’s living room, waiting for their customers’ orders to be packaged.

Digitalization of the Food Delivery Industry

With the introduction of GO-FOOD, an app-based food-delivery platform in Indonesia, Fikri is able to fulfill his dream of opening a restaurant out of his kitchen. Indeed, this technology has enabled small business owners like Fikri to operate a restaurant without having to open a physical store at all, adopting a fully digital delivery model where orders are automatically relayed from the customer to the restaurant in real-time and freelance riders are automatically assigned based on proximity to fulfill orders. This dramatically reduces initial capital requirements and subsequent operational costs of a restaurant business.

The Rise of GO-JEK

GO-FOOD is a food-delivery service offered through the GO-JEK app ecosystem, Indonesia’s first tech unicorn currently valued at ~US$3 Billion.[2] Started from its humble beginning as a ride-hailing app for bikes, GO-JEK rapidly expanded to provide a wide variety of services such as at-home massage and housekeeping. GO-JEK Co-Founder and CEO Nadiem Makarim (HBS ‘11) described the company as a “platform for the on-demand economy”.[2] As this trend continues throughout Asia, pressure mounts for restaurant-owners to partner with these providers in order to remain competitive. In China for example, it is predicted that as many as 350 million consumers would have used similar services in 2018.[3] 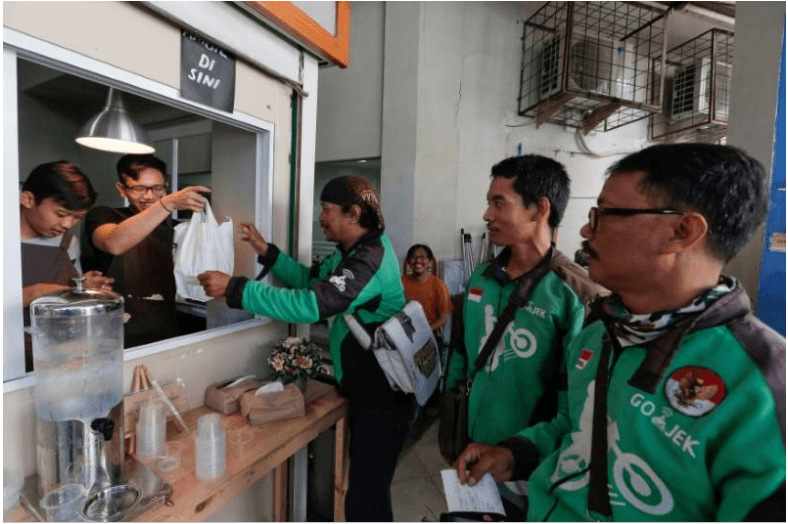 GO-JEK riders waiting to pick-up GO-FOOD orders at a food store in Jakarta.

Good for Consumers, Bad for Merchants?

Fikri and many other forward-thinking entrepreneurs decided to ride the wave of change by becoming one of the first merchants to partner with GO-FOOD in 2015. Since then, GO-FOOD’s restaurant partnerships has grown from 15,000 at launch to more than 85,000 in 2017.[5] Fikri himself has seen 100-fold increase in the orders he received.[6] Research done by other organizations support this evidence: Indonesia Franchise Association estimates 30% increase in revenue of its members after partnering with the platform.[4] In the short-term, many more restaurant owners will follow Fikri’s steps in partnering with GO-FOOD to gain access to the growing massive customer base.

The medium-term paints a different picture. As many more restaurants and big franchises form partnership with GO-FOOD, relative competitive advantage of each partner diminishes, as every player would gain access to both the customer-base and rider-base. Furthermore, the visibility advantage also diminishes since the customer will be flooded with a wealth of choice. To this point, Fikri’s medium-term strategy is to eventually build his own delivery armada.[8] He predicts that this is only possible if his brand has grown popular enough such that customers is willing to contact him directly. At that point, paying salary to deliverymen may become cheaper than the 20% cut GO-FOOD charges per transaction.[9]

Martabak Monkey should prepare both offline and online advertising campaigns to increase customers’ awareness. This allows them to increase orders in the face of growing competition with other restaurants featured on GO-FOOD. Martabak Monkey could employ a unique yet cost-efficient marketing strategy using social media, online influencers and paid advertising campaigns. They could also analyze customer behavior data available through the GO-FOOD platform to enable them to optimize inventory and labor usage with regards to predictable movements in demand.

In the medium-term, Martabak Monkey should prepare for upstream digitalization. GO-JEK or other companies might provide similar platform specializing in ingredients and inventory procurement, with wholesalers and grocers as partners. This could potentially revolutionize the sourcing industry by enabling restaurants to closely manage their inventory and perform JIT ingredients delivery through riders. Again, Martabak Monkey need to maintain its position as early adopter to keep an edge over the ever-growing competition in the food services industry.

The digitalization of food delivery serves as an example that a third-party may add value to the supply chain by bridging the gap between existing restaurant-customer relationship. By increasing visibility of supply and demand, and reducing the lag time in order fulfillment, platforms such as GO-FOOD eliminates the need for a physical storefront and traditional delivery system. However, as the number of restaurant partners grow, the visibility benefits brought by the platform diminishes, as customers is faced with increasingly complex variety of options.

As Fikri expands his franchise to five cities this year, what should he keep in mind regarding his increasing dependency on GO-FOOD? What would happen to his business if a GO-FOOD competitor enters the market?

Make Oxford Great Again: An Elite University in the Era of Protectionism

Student comments on “Delivering Happiness” – Serving Customers Without a Storefront