Terrorism is something familiar to us all, especially over the last decade where we have seen many terrorist attacks around the world either directly or through the media. From 2006 to 2013, there have been approximately 90,000 terrorist attacks causing about 130,000 fatalities throughout the world.[1] The rise of terror groups like Al Qaeda and Al-Shabaab over the last several decades has created chaos and fear throughout the international system. The loss of life and the economic impact of terrorist attacks are devastating. How do intelligence communities, the military, and law enforcement combat this threat? 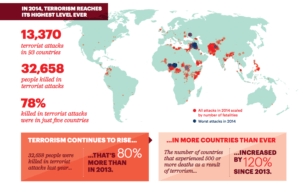 What exactly is “big data” and how can it help in the global effort to stop terrorism? Big data is the concept of using an enormous volume of available information, from a variety of sources and networks, to make insights at a rapid velocity to, in turn, gain an advantage against competitors.[2] Big data is a technology that lets users crunch an enormous amount of data, that when used correctly, can identify hard-to-detect patterns of terrorist groups or terrorist attacks, allowing the users to either prevent or respond to terrorism.[3]

Palantir Technologies, a Peter Thiel created Palo-Alto technology company currently valued at $20 billion, utilizes software to find connections between people, places and events in large repositories of electronic data.[4] Palantir’s current customers include the Central Intelligence Agency, the Federal Bureau of Investigations, Special Operations Command, the Department of Homeland Security, the New York and Los Angeles Police Department, and numerous other organizations within and outside the United States.[5] Why is this software so valuable? Intelligence and law enforcement organizations often have their own databases, with their own formats, that do not link to other databases, making it very difficult for analysts to conduct investigations and to obtain all the possible information that exists.[6] By interconnecting the databases, Palantir allows users to link and add new information where gaps previously existed. Palantir also allows users to see other users that are working on a project to promote interagency communication.[7]

Show Me an Example of this Technology! 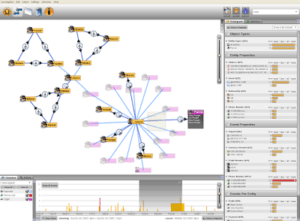 The following is a condensed version of a hypothetical situation that Palantir created:[8]

“… a foreign national named Mike Fikri purchased a one-way plane ticket from Cairo to Miami, where he rented a condo. Over the previous few weeks, he’d made a number of large withdrawals from a Russian bank account and placed repeated calls to a few people in Syria. More recently, he rented a truck, drove to Orlando, and visited Walt Disney World by himself. He spent his day taking pictures of crowded plazas and gate areas.

The day Fikri drives to Orlando, he gets a speeding ticket, which triggers an alert in the CIA’s Palantir system. An analyst types Fikri’s name into a search box and up pops a wealth of information pulled from every database at the government’s disposal. There’s fingerprint and DNA evidence for Fikri gathered by a CIA operative in Cairo; video of him going to an ATM in Miami; shots of his rental truck’s license plate at a tollbooth; phone records; and a map pinpointing his movements across the globe. All this information is then displayed on a clearly designed graphical interface that looks like something Tom Cruise would use in a Mission: Impossible movie.”

As you can see in the above example, Palantir links all useful information into a single portal for intelligence and law enforcement communities to act upon. With this new link in the chain, information can be linked and communicated to prevent terrorist attacks from occurring or it can be examined retroactively to find terrorist locations.

That’s Cool, Can it Do Anything Else?

JPMorgan Chase is using Palantir’s software to spot fraud and prevent people from hacking into others’ online or ATM accounts.[9] Following the devastating 2010 Haiti earthquake, Palantir developed a database of names and structures affected by the crisis.[10] Palantir Health is a platform that allows authorities to reconstruct the history of patient interactions with health administrators.[11] These are simply the opportunities available for Palantir… what else can be done with big data?