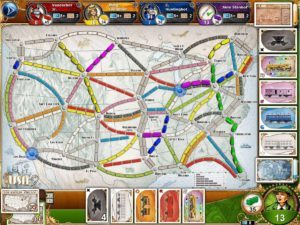 What could be more old-fashioned than board games? Board games feel like a more fitting form of entertainment for our great grandparents’ generation than today’s fast-paced, hyper-connected ethos. However, Days of Wonder’s foray into the digital world proves that even the most seemingly outdated products can flourish in the digital space.

Days of Wonder’s mission is to help avid game hobbyists and casual game players rediscover the sense of wonder and excitement they had as children when opening a new game. Their business model is to develop and publish “German-style” board games that typically emphasize strategy, downplay direct conflict with other players, lean toward economic goals, and keep all players in the game until it ends. Days of Wonder is best known for a board game it released in 2004 called “Ticket to Ride,” a railway themed, strategy game. Ticket to Ride sold well initially, and it received the 2004 Spiel des Jahres (Game of the Year) award, considered the highest accolade in the board game industry. Days of Wonder’s traditional operating model was to publish and distribute physical board games for sale at retailers and specialist hobby shops.

The Days of Wonder founders wanted to do more with Ticket to Ride, however. They decided to publish a digital version of the board game. There are obvious functional benefits to a digitalized board game (pieces cannot get lost, no storage space required, rules and processes are followed automatically, etc.1), but Days of Wonder went even further. In an absolutely revolutionary change to their operating model, Days of Wonder offered an online version of the game for users to play for free on their website. The obvious risk in this move was cannibalization – why would users pay for the physical version of the board game if they could play for free online?

In fact, just the opposite happened. The online version of the game dramatically boosted consumer awareness of Ticket to Ride and demand for the physical board game soared. Sales increased 30% following the release of the online version2. Based on this positive reception, Days of Wonder released an iOS version of Ticket to Ride for customers to play on their iPad and/or iPhone.  The iOS version continued to build customer awareness of the game, and it opened new revenue streams for Days of Wonder via the $6.99 app purchase price and $3.99-$4.99 in-app purchase options for additional game maps. The success of the iOS version ultimately led Days of Wonder to release versions on Google Play and Steam.

Altering their operating model to include the distribution of digital board games has proved a huge financial success for Days of Wonder.  In an industry where selling 50,000 board games is considered a standout success, Days of Wonder sold more than three million physical copies of Ticket to Ride in the decade after its release and generated more than $150 million in retail sales3.   This case shows that companies competing in even the most antiquated product categories can stand to gain from integrating digital technology into their business and operating model. It also shows how life-threatening risks to a business, such as cannibalization, can be successfully overcome through effective digital maneuvers.

In terms of next steps, I recommend that Days of Wonder improve their digital board game product by enhancing and extending the social aspect. The social benefit of playing a physical board game is an important component of the traditional experience—sitting around the table and engaging with others is a big part of the value proposition. In their digital version, Days of Wonder has attempted to recreate this social aspect in the digital space by allowing virtual gamers to play with others via their online connection. Days of Wonder also allows virtual gamers to display their personal profiles on the Days of Wonder website, complete with player bios, ratings, and rankings. I believe they can further improve their digital gameplay by adding two new digital features. First, I would add video functionality for the various players; this will enhance the social aspect by allowing gamers to see and interact with each other while playing. Also, I would allow digital players to post their achievements and victories on social media sites such as Facebook; this will extend the reach of the social aspect into the most prominent social media sites. These two moves will make Days of Wonder’s embrace of digital even more effective.

1 – See here for the pros and cons of Digital vs. Physical board games: https://www.wired.com/2012/11/ticket-ride-ipad-vs-board/

Student comments on Days of Wonder: Board Games Go Digital