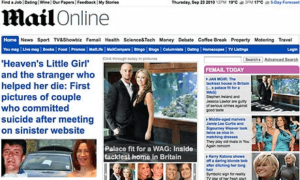 There is no one Daily Mail. While the daily newspaper is more likely to focus on the ills of immigration, the website, at the time of writing, heralded such stories as Khloe Kardashian’s struggles with her body image (real quote), Hillary Duff’s $11k Hermes purse (which she used while running errands in Studio City!), Elsa Pataky’s sultry lingerie and Natash Oakley’s natural cuves in bikinis (in candid beach snaps!).[1]

And yet, while completely dissimilar, each support the others’ popularity and work in tandem to ensure the group remains incredibly popular and profitable, [2] with the website the biggest English-language newspaper in the world with 229 million monthly global unique browsers.[3] If other print publications needed it, here is proof that newspapers can use the digitalization of its industry to its advantage and create not simply a necessary supplement to their offline media.

The Mail online was launched in 2004.[4] Like many of its UK peers, it was initially simply an online portal for what it published on paper. However, with an audience of 45 to 65 plus,[5] it was clear that “it [was] not the easiest job in the world to get the older audience online”.

However, in 2008, it was relaunched with its own Mail Online brand and the [in]famous sidebar of shame. Creating its own content allowed it to create new value that the print edition could not – appealing to workers on coffee breaks, engaging people during their lunch, and ensuring that once you clicked on one article you were engulfed by many others. In fact this is not the same newspaper, with its ‘xenophobia and parochialism’[6] that so many people in the UK find abhorrent.[7]

There are two key business operational decisions that has allowed for growth of 38% pa since the relaunch.[8] With the increasing use of multiple stimuli and many screens, a Microsoft study has found that the human attention span is at an all-time low.[9] The Mail Online plays into the trend of ‘clickbait’.[10] And it does so with large images, naked men and women, and bold headlines.

Yet, given its link to the Daily Mail, this is no simple ‘clickbait’ that you see elsewhere online, it has the rubber stamp of Middle England’s go-to news resource.[11] Maintaining a safe enough distance to be apolitical and ensure no reader group is marginalised,[12] but enough to be more respectable than much of the spam across the rest of the web.

The value of the website is that it creates a new audience, while allowing the old audience – predominantly women of the AB and C1 class[13] – to engage with the paper throughout the day. And contrary to what is seen with many of the news items from myriad sources that come up on facebook, the Mail Online, is Uber-like in its ability to draw readers to its pages first before looking elsewhere.

With its popularity in the UK, it has also expanded this format to the US. And with its long front page and “hectic” number of articles, it scores highly in google searches.[14]

There are improvements to be made – although revenue from advertising continues to grow, its revenue[15] is just 18% of the print paper and just 5p per user. [16] Although it may seem hard to monetize these online platforms,[17] Facebook was confronted with a similar dilemma.

And here is where the dilemma lies.

A paywall is out of the question given the effect that this will have on those who read it and are used to having their articles for free. So is more intrusive advertising. However, the expansion of paid for ads for clothes as well as a Facebook style use of user data to target users more effectively with the ads they are receiving.

The Daily Mail newspaper is “an example of how to age as ungracefully as possible”. Seen by many in the UK as racist,[18] homophobic,[19] it has begotten a wildly successful website that mixes gossip with lifestyle. The issue now is how to monetize the opportunity that is has created while ensuring the loyalty of its customer base.

Student comments on Daily Mail: Hailing Hitler to revealing how you too can get Mark Wahlberg’s Pecs