Waterparks, 5,000-person floating communities, ice skating rinks, promenades, and endless buffets are but a few of the many things people associate with cruises. If it sounds too good to be true, then you’re right. However, all this fun at sea comes at a cost to the environment as cruising generates significant waste which affects both the air and the water. According to the EPA, an average cruise ship emits the same amount of sulfur dioxide as 13.1 million cars combined on a given day.[1] Regarding waste, an average cruise ship with 3,000 passengers and crew produces 21,000 gallons of sewage which adds up to over one billion gallons of waste a year for the industry.[2] Even the cruise lines themselves do not dispute their environmental impact, and many of them, including Crystal Cruises, have deliberate and comprehensive plans for reducing pollution, complying with environmental regulations, and improving systems to minimize their negative environmental impacts.

These efforts are all well documented and not considerably different from actions taken by many other companies in a diverse set of industries to reduce their own carbon footprints. But, while Crystal is undoubtedly a contributor to the global increase in “greenhouse gas” emissions and has adjusted its operations accordingly, there is a unique silver lining in that climate change and its subsequent effects also present Crystal and the cruise industry with a new opportunity. In this case, it is a new frontier…the Arctic! 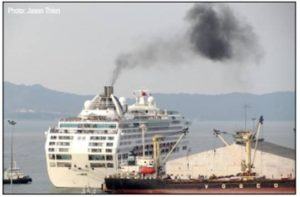 The Northwest Passage is the famed route connecting the Atlantic and Pacific Oceans. Until 2007, Arctic sea ice made the passage almost unnavigable. But, because of climate change and the subsequent warmer temperatures, in 2007, the passage became ice free in the late summer months.[3] Businesses see this as a growth opportunity and the cruise industry, specifically Crystal Cruises, has been at the forefront.

In 2013, recognizing the potential opportunity, Crystal Cruises CEO, Edie Rodriguez, set out an ambitious plan for the company to charter a luxury cruise ship through the Northwest Passage. Three years later, on August 15, 2016, the Crystal Serenity set sail from Seward, Alaska on a lengthy journey up through the Bering Strait, along the Northern coast of Canada, past Greenland, and finally down the eastern seaboard of the United States. On September 16th, 2016, the Crystal Serenity arrived in New York, completing the 32-day journey and becoming the first voyage of its kind.[4] Given the trailblazing and uncertain nature of the expedition, Crystal approached preparations and operations very differently than it ordinarily does. For instance, from the beginning of planning, there was intense coordination between a Crystal expert team and several expedition partners. The vessel was escorted by the RRS Ernest Shackleton which served multi-purpose functions, such as a first response vessel in case of emergency, as well as an ice breaker, and helicopter carrier. Additionally, the Serenity was equipped with forward looking sonar, ice searchlights, ice radar, and a thermal imaging system.[5] 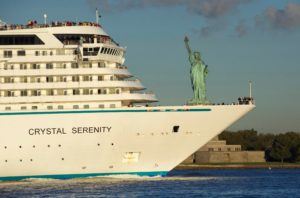 While there was a great deal of press coverage celebrating the historic nature of the trip, it was not all positive. As noted above, cruise ships negatively impact the environments in which they operate given their carbon emissions and waste dumping. Not surprisingly, many were quick to point out these seriously harmful effects and the potential for a magnified impact in such an environmentally fragile region as the Arctic. Critics recognized that, while Crystal Serenity may have been the first, it is only the beginning as the Northwest Passage is opening itself up to all kinds of traffic (yachts, cruises, cargo ships, etc.). Ships crossing the Arctic Northern Sea Route increased seven-fold just from 2010-2013.[6] 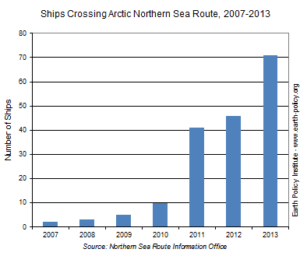 There is evidently a business opportunity here, and if Crystal does not capitalize on it, then someone else will. However, given the environmental vulnerabilities of the Arctic as well as the cruise industry’s indisputable existing environmental impact, Crystal must proceed carefully. There is an obvious irony and tension in recognizing your role as a contributor to climate change and putting policies in place to mitigate those impacts, while also pursuing a business opportunity that only exists because of climate change. As such, Crystal needs to enhance its efforts to minimize and reduce the environmental impact of its operations. There appears to be significant room for improvement as Friends of the Earth rated Crystal Cruises toward the very bottom in its 2016 Cruise Ship Report Card which rates cruise lines on their environmental footprints.[7] Additionally, Crystal needs to be more proactive versus simply adhering to current standards and regulations. They should strive to add value to the Arctic instead of simply minimizing harm. This will not only give Crystal a competitive edge over competitors as regulations tighten but will also help Crystal combat critics who claim it is hypocritical in its actions.

In need of a Band-Aid: Johnson and Johnson’s climate change strategy

Student comments on Cruising to the Arctic? That’s Ironic…