“If you went to bed last night as an industrial company, you’re going to wake up this morning as a software and analytics company” – Jeff Immelt (Clancy)

On October 9th, 2014 GE CEO, Jeff Immelt, addressed the Third Annual Minds & Machines conference with this sobering statement. The crowd in attendance had gathered to learn how GE and a global community of other businesses are working towards the idea of an industrial internet. This statement highlighted that digital transformation is no longer just a threat to the industrial sector, but rather a Darwinian death sentence. This message was heard loud and clear by many Industrial executives, as reflected in the survey results below: 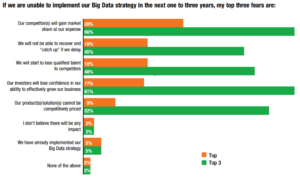 GE, like many of its peers, competes to sell heavy manufactured goods on razor thin margins. This business model works because their products, whether jet engines or steam turbines, remain in service for upwards of 40 years each, during which time they generate higher margins by selling additional services. In 2015, this translated to $49.5B in Services revenue on 105.9B in total sales (Relations). Going forward however, the company seeks to use digital innovation and big data analytics to increase their service offerings and lower the cost of service, while generating value for customers.

Immelt plans to accomplish this by integrating sensors into hardware that will provide millions of data points that can then be analyzed using applications run on GE’s industrial operating system, Predix. GE estimates that the market opportunity of using big data analytics to optimize performance to be as follows: 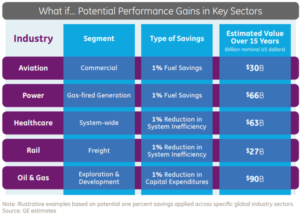 In order to realize this potential, GE has been working on developing these capabilities over the last several years and is only just starting to see benefits as it comes to market. Historically, GE’s business model has sought to create & capture value by offering technology, service, and in some cases even financing through its GE Capital business unit.

Today, the market opportunity presented by digital has led the company to transform and develop substantially different capabilities focused on software. GE has made the decision that it will create more value by investing in new software applications than it can trying to simply optimize the engineering behind its hardware technology. In making this change, GE has decided to lead the industrial internet revolution and set the best practices for doing so.

In order for GE to make its digital transformation a success, it needs to achieve a critical scale with Predix, and its applications, establishing it as the dominant operating system for industrial companies. Critical scale is crucial to the company’s success, as it will enable network benefits to emerge as users on the platform are able to more rapidly learn from their aggregated data. While the company is moving in the right direction by being one of the first movers to market, and rapidly introducing applications like its APM software to demonstrate the advantages of digital to its customers, it must maintain this momentum in order to solidify its place as the leader in digital industrial.

This week, at the start of the Sixth Annual Minds & Machines conference, GE announced ~$1B in acquisitions of software companies meant to bolster is digital capabilities in cloud-computing and machine learning (Reuters). However on the same day, Siemens, GE’s primary competitor, announced the acquisition of Mentor Graphics for $4.5B (Seimens). While GE was the first mover in consolidating software platforms behind a digital company at this scale, they inadvertently started an arms race which will continue to rage until one clear winner has emerged as every player pursues the same massive market opportunity which GE originally identified.

In order for GE to succeed in this new area, not only against new entrants like Seimens, but also established companies like Amazon Web Services and Google, they must fully commit to aggressive acquisitions. By pursuing inorganic growth, GE can quickly capture market share and protect itself from competitors who would otherwise make similar acquisitions and end up fragmenting the market to the point where network benefits are unrealizable.

AdhereTech and the Smart Pill Bottle

IoT: The Internet of Trenchcoats