In 1902 a young company presented Liquid Air, an automobile that was to be fueled by liquid nitrogen. Unfortunately, the principals were unable to take this concept past design phase, going into receivership. Ever since, certain engineers and scientists have concerned themselves with the question: can liquid nitrogen be used to power an engine. Nearly a century later a British inventor, Peter Dearman, succeeded where those before had failed. His Dearman Engine successfully runs his car using liquid nitrogen, though the lack of gas stations providing such a fuel in the UK, means that he can’t take it too far. [1]

From this innovation, Dearman formed a company, which is now 50 people strong, has raised close to $25m in the last year, with one of the largest supermarkets in the UK (Sainsbury’s) trialing the Dearman technology on their refrigerated trucks. [2] Dearman’s CEO, Toby Peters, claims that the technology can become a central aspect of what he calls the emerging ‘cold economy’. [3] This technological breakthrough is particularly relevant when you consider that heat driven engines (and therefore heat emitting) are the primary mechanism used to cool environments such as cold chains, and that the warmer the context the more power is required to cool any given space.

Given that food wastage is the third largest CO2 contributor (after the US and China), and given the growth of cold chain is going to happen in warmer and warmer environments (i.e. emerging markets), clearly new ways of creating ‘cold’ should be found. [4] Given that Dearman system is projected to attain a 50% efficiency saving when compared to diesel run cold systems, this appears to be one additional option. This is particularly interesting from an environmental perspective given its only emission is nitrogen, which already makes up 78% of the atmosphere.

The engine at the heart of the technological process is a normal piston engine which has been around for generations. However, where the combustion engine uses lit fuel as the mechanism for driving the pistons, the Dearman Engine starts at the other end of the spectrum using liquid nitrogen, which has a boiling point of -196°C. What was particularly innovative about the Dearman product is its division of the inputs into two. See the below graphic for Dearman’s explanation of how the engine works:

As the Dearman team take this technology through trial stages there are a couple of factors that are against the group. Primarily the infrastructure required to service a liquid nitrogen engine. The availability of liquid nitrogen, and the safe handling of it remains a large constraint to the delivery of this invention for mass market consumption. A compelling case can be made that businesses already using liquid nitrogen, and indeed businesses with proximity to LNG liquefaction plants (where liquid nitrogen is used as part of the cooling process, but then evaporated on delivery), could tap into this fuel source with greater ease than others. Therefore, it is reasonable to assume that the initial market for this product will be commercial buyers, such as those businesses operating cold chains.

Another significant question mark with respect to this business is the price point of the technology, and the ongoing cost of running it. Dearman are yet to provide insight into this issue – but for this technology to be successful, the lifetime cost of a Dearman engine must be below that of its diesel counterpart.

What is perhaps most exciting about this company in the context of a climate sensitive world, with growing middle class consumption is the rise of the emerging market cold chains. Chinese fruit and vegetable wastage is estimated at $20 billion per annum, with 5% transported within a cold chain. In India it is estimated $13b billion is wasted. [6] The below graphs the estimated growth in cold trucks over the coming years. Should Dearman be able to provide a cost comparative solution, that has the endorsement of a large UK supermarket chain such as Sainsbury’s, the company will be very well placed to tap into the massive growth potential in cold chains across emerging markets. 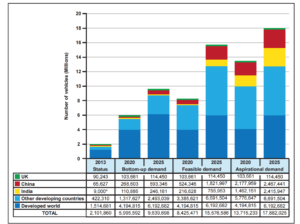 Addressing food wastage and engaging with the increasing need to introduce cool environments globally, in an emissions conscious way, will be of paramount importance in the coming decades. Should Dearman come through their development stage, and complete a successful trial with Sainsbury’s and others, the company will be very well placed to tap into the exponential growth of the cold economy across emerging markets in the coming decade.

[1] “Cool thinking: An inventor’s persistence may be about to pay off,” The Economist, May 9th 2015, http://www.economist.com/news/science-and-technology/21650517-inventors-persistence-may-be-about-pay-cool-thinking , accessed November 2016

[3] Toby Peters, “The Cold Economy – Why? What? How?” University of Birmingham, May 2016, http://www.birmingham.ac.uk/Documents/college-eps/energy/Cold-Economy.pdf , accessed November 2016