Foreign governments have taken increasingly defensive tactics to impede the growth of globalization by US domestic firms localizing in their markets. This counter movement is particularly salient for digital media companies, where content can be antagonistic to cultural values and disruptive to existing delivery platforms.

This tension hit a breaking point in Indonesia in January 2016 when PT Telekomunikasi Indonesia (Telkom), a state-owned telecommunications provider, blocked Netflix content shortly after the streaming service launched in the country due to alleged permitting and censorship issues. Telkom, which serves 85 million customers1 and is Indonesia’s largest internet provider, claimed to take “…this step to protect the Indonesian people.” 2 However, other internet providers in the country continued to deliver content to Netflix subscribers.

Protectionist trends like this should be alarming to Netflix as well as other content providers looking for growth opportunities in foreign markets. Telecommunication companies are key to the content supply chain pipeline, providing “last mile” internet access directly to Netflix subscribers.  Without delivery through these networks, content firms cannot compete in foreign markets.

International governments have adopted widely varying stances on what type of content is banned for “cultural, religious, or political issues” 3 and are often influenced by religion. Indonesia, whose population is nearly 90% Muslim4, has adopted some of the world’s strictest censoring requirements. Navigating varying restrictions across international borders has become increasingly complex and burdensome for global content providers. However, adhering to these requirements on a country specific basis is critical for continuing operations.

Netflix quickly rebutted the allegations behind the Telkom ban. The company claimed that it was following local censoring requirements and that its business model was not akin to traditional Indonesian broadcasters and therefore should not be subjected to local permitting requirements. This strategy was important to avoid being shut down by the other Indonesian internet service providers. Given the importance of the Indonesia media market within the region and its “first mover” advantage ahead of other domestic streaming rivals Amazon, Hulu, and HBO, it was critical for Netflix to continue operations. Indonesia is Southeast Asia’s largest online country5 with an emerging economy and population that has shown a propensity for watching video content online according to a Financial Times Consumer Research report6. 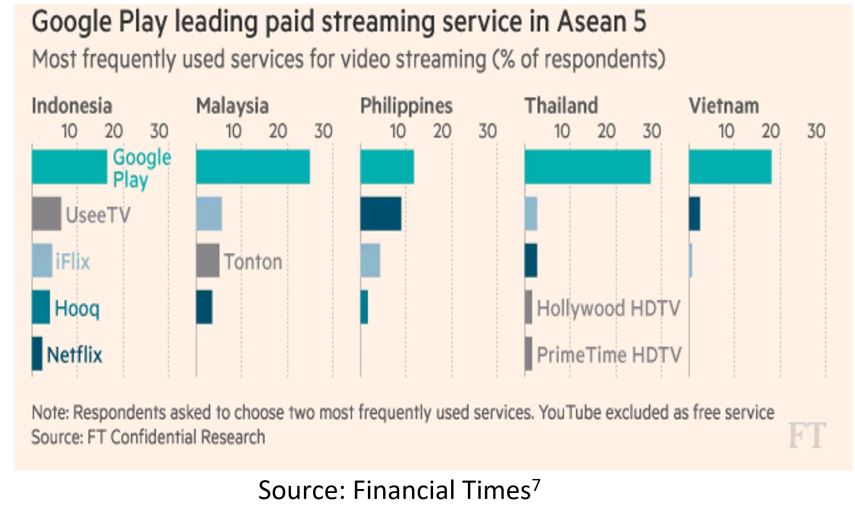 To regain access to Telkom’s large customer base, Netflix next began to negotiate directly with Telkom to resolve the ban. The confidential negotiations dragged on for over a year until April 2017 when the two companies agreed to a partnership agreement. Netflix content would be offered as part of a bundled internet/media package on the service provider’s platform. Additionally, Netflix would remove or block any content that violated Indonesia’s film censorship laws.

It is unclear what Netflix’s long-term defensive plan is in the country given Indonesia’s shifting regulatory environment. In 2016, the government allegedly asked content companies to establish local offices in the country to conduct operations. The purpose of establishing local entities would be to curb foreign companies from taxation evasion as well as to gain more control over content, payment systems, and consumer data8. Regulatory restrictions like these represent opportunities for local governments to protect existing content ecosystems and inhibit rapid diffusion of market share by foreign firms.

There are several alternative steps that Netflix can take to smooth relations with Telkom and as well the Indonesian government.

Resolving the ban was a time and resource consuming burden for Netflix. The outstanding concern is how the company plans to manage this type of issue on a global scale. Given the variety of local regulatory and censorship requirements around the world, how can Netflix mitigate protectionist situations like this in the 190+ other international territories in which it operates?

4“10 Countries with the Largest Muslim Population in the World,” May 26, 2015, [http://www.malaysiandigest.com/features/555150-10-countries-with-the-largest-muslim-population-in-the-world.html], accessed November 2017

Platooning: The Evolution of Trucks in Autonomous Driving Age

Bharti Infratel: Telecom Infrastructure in Emerging Markets Has Consequences for the Environment

Student comments on Content Globalization – A Script for Success?