The coffee production has been severely affected by recent climate changes, such as rising temperatures and long droughts punctuated by intense rainfall. The rising temperature directly impacts the production available area, as coffee beans are heat sensitive, and long droughts/intense rainfalls are responsible for lower crop yields. Because of these effects, the coffee industry is under high risk: analysts expect coffee prices to increase, flavour and aroma to change, and coffee could be extinct by 2080[i]. Additionally, millions of people could lose their jobs in the industry.

Brazil has been the highest global producer of coffee beans for over 150 years, responsible for 2.8 millions of tonnes of beans in 2015, roughly one third of world´s production. Other important producers are Colombia and Vietnam[ii]. Any relevant change in climate in these countries immediately impact prices worldwide, and the bad news is that all of them have been having warmer and drier weather recently, predicting substantial losses of coffee production by 2050[iii].

Here we´ll analyze how the industry is being affected, the threats and opportunities, and some of the best initiatives to address these issues based on a few analyses from Coffee Holding Co. (NASDAQ: JVA), a wholesale coffee roaster and dealer from the United States.

JVA has three fronts of business: wholesale green coffee (it sells unroasted green coffee beans to roasters and operators), private label (it roasts, blends and packages coffee for 30 private labels), and branded coffee (it has 5 proprietary brands and 2 exclusive agreements). The company sources its coffee from different countries, such as Brazil, Colombia and Mexico[iv]. 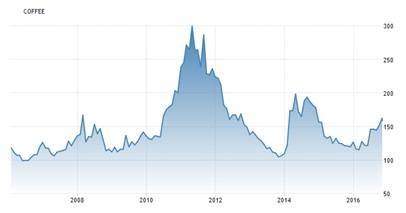 According to Climate Institute, we can expect several climate changes in the following years, which will directly impact their suppliers´ production cost. The question here is how companies will address this issue and fill the gap between growing demand and potentially limited supply.

Arabica cost is expected to significantly increase in the next years

There are over 100 coffee species, however the two main ones are Arabica and Robusta. Arabica beans are naturally mild and aromatic. Robusta is easier produce on the farm, has a higher yield and is less sensitive to heat and pests. As Arabica is more heat-sensitive, slight rises in temperature affect yield – as temperature tends to increase in the following years, supply tends to be lower, increasing coffee prices.[vi] 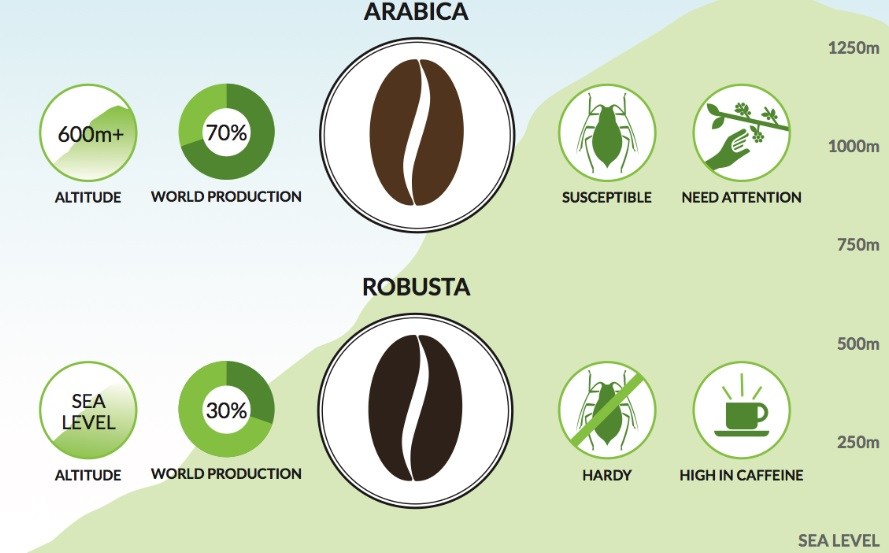 So far, changes in price have been passed to clients, as we can see through JVA´s 2011-2015 Income Statement. Regardless the commodity price, there wasn´t a significant change in the company´s gross margin, keeping 4%-7% levels in these years, except by 2014, where commodity prices were unexpectedly low[vii].

The question is how much more consumers will absorb higher prices. Coffee is still a luxury product and is very unlikely to keep the same demand if prices skyrocket.

JVA is addressing this issue trying to both diversify their coffee supply and hedge the effects of future changing price. Based on their 2015 Annual Report: “We purchase coffee from a number of countries and are able to freely substitute one country’s coffee for another in our products”. “We also use hedging and short-term trading of coffee futures and options contracts, and intend to continue to use these practices”. These are indeed efficient initiatives in short-term, however, temperature rising will soon impact all regions, leaving the company with no option but to change its strategy.[viii].

Although its flavour and aroma are not as rich as Arabica´s, there is still a huge market to grow in this front. Production is not expected to be that much affected, and countries such as Vietnam are more and more investing in its coffee production, which makes prices to be less affected in the future.

2) Partner with entities that are investing in genetically-modified Arabica

Genetic transformation has a huge potential in improving its resistance to heat. There are several projects being tested, such as a breeding program with the highly genetically-variable Nicaraguan coffee[ix]. Partnering with these entities will allow JVA to stay on top of industry improvements, make strategic decisions fast, and potentially benefit from production scarcity.

Obviously, these recommendations need to be further analyzed and optimized, but the fact is that climate changes are here and are already impacting the coffee business. Changing is no longer a matter of “if”, it´s a matter of “when” and “how”.

Student comments on Coffee industry in danger of extinction