Global warming is affecting the world in unimaginable ways. Droughts are commonplace, resources are scarce, and globally we are facing unpredictable and massive storms. Not only is this bad for the environment, but its effects are transcending weather trends and greatly impacting corporations and economies at large. Because of the global nature of our economies today, we can’t turn a blind eye to issues internationally; international concerns can have catastrophic impacts for US-based companies. For Coca-Cola, it wasn’t until 2004 when they lost significant business in India due to a local water shortage, they quickly realized how dire this situation could be and jumped into action.[i]

What Coca-Cola quickly realized in 2004 is that while they would be impacted by many issues related to global warming, sustainable access to clean water is pertinent to future success. Not only is water the main ingredient in their beverages, but it is also a critical component of the manufacturing processes, a key input to agriculture for other raw materials, and the communities where they bottle the products are also their end consumers, so they have a vested interest in keeping these communities thriving.[ii]  Their action planning included setting some ambitious goals; in 2007 Coca-Cola defined one of their goals as “replenishing every liter of water used in its global sales volume and production by the end of 2020.”[iii]

Now let’s flash-forward to current-day, 2016. No-one could have predicted this rapid success, but in August, Coca-Cola announced that they achieved this ambitious target 5 years ahead of schedule. In fact, just last year, Coca-Cola replenished 191.9 billion liters of water, representing 115% of the water it took out of these communities.[iv] Coca-Cola has achieved this replenishment goal by supporting 248 community water projects across 71 countries, impacting 2,000 communities.[v] These projects have been in partnership with a variety of partners including the World Wildlife Fund, USAID, The Nature Conservancy, CARE and UNDP[vi] and have a focus along one of the following four objectives: 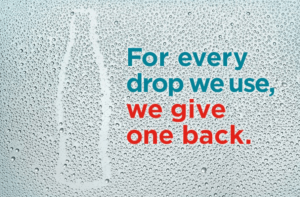 In addition to replenishing the water they consume, Coca-Cola has also made huge strides since 2004 against another water-related goal of improving the efficiency of the water it uses. Just last year, Coca-Cola was able to improve its efficiency by 2.5%, adding to the cumulative 27% improvement they have achieved since 2004. In 2015, Coca-Cola was able to produce 1 liter of product by using only 1.98 liters of water, marking the first year where Coca-Cola’s water-use ratio fell below 2. While this is astounding progress, their ultimate goal is to get this down to 1.7 liters to produce 1 liter of product by 2020.[viii] There are already multiple plants across the globe which are operating with less than 1.7 liters already, with some operating as low as 1.4 liters. 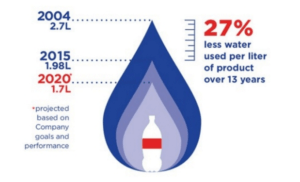 It is inspirational to have company that is traditionally revenue-driven take a strong stand on the direct environmental impact it has as a company and the sustainability of the markets in which it operates, but their work can’t stop here. For one, showcasing this level of concern for sustainability is almost table stakes in this day in age. Coca-Cola’s biggest competitor, Pepsi, is also competing on this front and reported a 26% reduction in water usage since 2006.[ix] Coca-Cola must continue to push for more improvements to its environmental footprint and be a leader both within CPG companies and across industries to show other companies why this is so important. While the progress thus far has been astronomical, the wins going forward will be even harder to achieve. Coca-Cola must look to innovation and technology to continue to find improvements in their systems and to continue pushing for greater access to clean water globally.

Shake Shack – Please, give us the burger of the future.

When Climate Bites | Controlling the Spread of Dengue Fever

2 thoughts on “Coca-Cola: Taking the air right out of bubbling climate change issues”