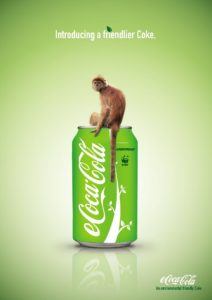 Coca-Cola (NYSE: KO) is the largest beverage company in the world, with a market capitalization nearing $200bn (as of 12/31/2015), a corresponding net income of $7.4bn, and unparalleled brand awareness. The company has approximately 500 brands to its name, a distribution network that spans over 200 countries, and an aggregate 3800+ products globally. With such global scale, we would be remiss not to ask what they are doing to mitigate their global environmental footprint. [1]

Though water is a key ingredient for Coca-Cola’s product portfolio, it is also a finite resource that is increasingly in demand. Climate change exacerbates the issue by impacting both quality and quantity of water available for human consumption. [3] With that in mind, Coca-Cola aims not only to optimize its use of water, but also to protect freshwater resources and watersheds globally.

Given the high proportion of non-biodegradable materials used in Coca-Cola’s packaging (e.g. aluminum, plastic), the company is especially focused on supporting recycling initiatives and incorporating renewable materials into its production process, e.g. the PlantBottle, shown below. 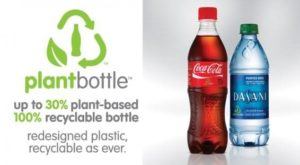 In addition to water, Coca-Cola products involve numerous agricultural ingredients (e.g. sugar, coffee, tea, fruit and corn). It is important that these products be produced in a sustainable way that mitigates impact on the environment. To do so, Coca-Cola has partnered with the World Wildlife Fund and Cargill “to help local farmers increase corn yields, reduce post-harvest waste and reduce their environmental footprints.” 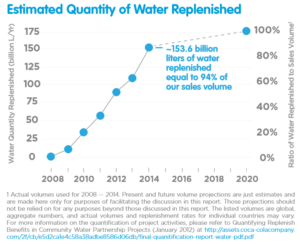 Goal: “Work with partners to recover and recycle equivalent of 75% of bottles and cans introduced by KO into developed markets by 2020.” Progress: “On track.” The company estimates a recovery rate of 61% in developed economies.

Goal: “Source 25% of PET plastic from recycled or renewable material by 2015.” Progress: “Off track.” Only 12.4% of packaging materials globally are made with renewable or recycled material.

Goal: “Reduce carbon footprint of the ‘drink in your hand’ by 25% by 2020.” Progress: Tentative reduction targets established through 2020.

Coca-Cola’s effort to mitigate its environmental impact is admirable. That said, many of the goals stated by the company are not only subjective, but also set for completion by 2020, calling into question the veracity of initiatives deemed to be “on track.” Even still, many of their initiatives appear to be “off track” despite that they themselves set for the goals and corresponding timelines.

What more can Coca-Cola do?

Plant bottles are still plastic.  Despite a more environmentally friendly production process, using ethanol from renewable sources (i.e. sugar cane), the output remains basically unchanged: a non-biodegradable plastic bottle. And unfortunately, consumers only recycle a small fraction of those bottles that they use.

Recyclable does not mean recycled. In addition to company-led measures to offset environmental impact, Coca-Cola would be wise to amplify its efforts by educating its consumers on the importance of their participation in this same process.

Corporate and consumer collaboration is not enough. [5] Coca-Cola has been proactive about establishing partnerships in order to move their environmental initiatives forward. They should pursue a similar strategy with to partner with state and foreign governments in support of bottle bills, “state legislation that creates a deposit system for beverage containers. In the 10 states where they’re enacted, bottle recycling rates range from 60 percent to 80 percent, dramatically higher than the national average.”

Ski Season is Coming… But Where is the Snow?