Why pay for the regulatory-driven costs of climate change if you can just convince the government to change the rules for you? For American Electric Power, the 2nd dirtiest power company in the US, that’s the plan. [1, 5] But AEP is not alone in its quest to figure out novel ways of coping with the mounting costs of climate change. In fact, climate change is reshaping the entire energy industry, forcing companies to change the way they operate or risk obsolescence. As the costs of “green” technologies and natural gas continue to decrease, “dirty” generators like AEP must adapt to changing regulatory and market forces to remain competitive.

Regarding the first and second mechanisms, AEP has a few options: it can either comply by upgrading its coal plants to meet the government’s standards, buy new power plants that use cleaner fuel sources, sell its dirty coal plants, or simply try to ignore the rules and hope it doesn’t get caught. Either way, AEP will have to pay up. For perspective, through just one federal lawsuit in 2007, AEP “agreed to cut 813,000 tons of air pollutants annually at an estimated cost of more than $4.6 billion, pay a $15 million penalty, and spend $60 million on projects to mitigate the adverse effects of its past excess emissions” to comply with federal regulations limiting emissions from 16 of its coal-fired generation resources. [3] Over time, the specter of law suits like this have contributed to a drastic reduction in AEP’s carbon footprint, as shown in Figure 1: 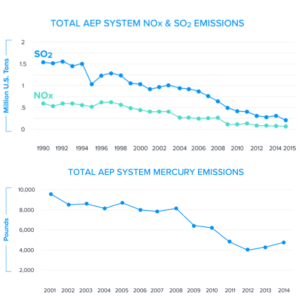 Regarding the third mechanism, in many states, power companies aren’t allowed to control the energy supply chain – partly to improve reliability and partly to mitigate monopolies from forming. If AEP could jointly operate its generation, transmission, and distribution, however, it could force captive customers to buy its coal power. Instead, AEP is forced to compete at each level of the supply chain, meaning if its coal power is too expensive or too dirty to sell, it’s out of luck.

Currently, if AEP wants to sell coal power, it has to bid into a competitive regional market by estimating the cost of supplying its power at a future date. The market authority then aggregates all bids from each participating power company and determines which companies will be allowed to supply the projected market capacity. Two factors help determine which bids will be accepted: (1) the cheapest bids needed to satisfy total demand and (2) the generation resources needed to satisfy regulations mandating the inclusion of renewables. AEP’s continued reliance on coal, which is dirtier and more expensive than cheaper, cleaner alternatives often preclude it from meeting the market-clearing bid. The only way it can sell in to these markets would be to sell below cost.

So far, AEP has focused primarily on mitigating these threats by selling its dirty assets and buying cleaner assets, as shown in Figures 2 and 3 below. 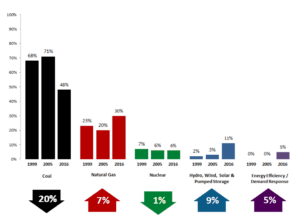 But if selling coal plants and investing in clean resources isn’t enough to overcome the regulatory and market challenges created by climate change, why not just change the entire system? Although it may be the most difficult and least environmentally friendly path, it may also be the most economical. Currently, AEP is lobbying the Ohio state legislature to allow generators to sell power directly to affiliates. [5] This would allow AEP to bypass the bidding process of regional power markets, creating an opportunity to sell coal power to captive customers through its own affiliates. Although its coal power would still have to meet regulatory emissions standards, it would no longer be subject to the competitive pressures to sell below operating cost.

The Ohio Legislature will reconvene in early 2017 to consider AEP’s proposal. If AEP fails, however, it should pursue three additional alternatives to remain economically viable while promoting greater environmental sustainability: (1) mitigate losses by selling its uneconomic coal plants; (2) spread out the costs of coal emissions by pushing for regulatory standards based upon broader, regional emissions and renewables targets; and (3) compensate for losses by investing in expanded transmission channels, which, in turn, support the integration of renewables into the grid. Otherwise, AEP will have to continue doing business as usual in a marketplace that is becoming increasingly hostile to coal power.