In a time characterized by increasing isolationism, Boeing is at risk of enduring significant supply chain volatility and loss of international sales.  As the number one exporter in the U.S.,[i] Boeing is heavily reliant on working relationships with foreign governments, the Export-Import bank, trade rules and tariff agreements (including NAFTA), and suppliers around the globe.[1] Boeing must persuade the administration to support global trade, work towards vertical integration, and bring engineering control back to the company to derisk future supply chain disruption.

Boeing competes with French rival Airbus for the majority of the airplane market.  Over time, Airbus has closed the quality gap relative to Boeing, which has led to airlines becoming increasingly price sensitive.  The price sensitivity has led to a concern over supply chain disruption and cost. This is exacerbated on the 787 program, where Boeing developed a global partner strategy and outsourced more than 70% of the manufacture compared to the average 35-50%.[2]  Boeing’s core competencies have traditionally been engineering and subsystem integration, but the strategy implemented on the 787 program entailed outsourcing the majority of integration and some engineering to the Tier-1 suppliers.[3] These changes make Boeing significantly more vulnerable to supply chain disruption, as Boeing no longer owns the engineering and integration needed to transfer work to a different supplier or bring the work back in house.  The current administration’s threat to impose 45% tariffs on goods from China would likely lead to Boeing not being able to compete effectively with Airbus due to enormous supply chain costs.[4] 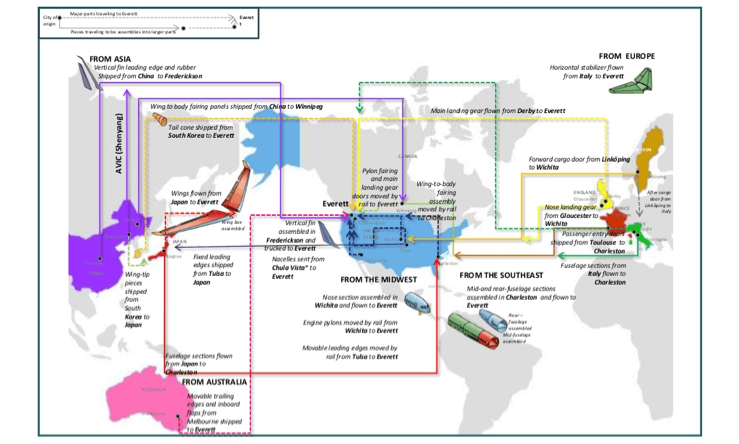 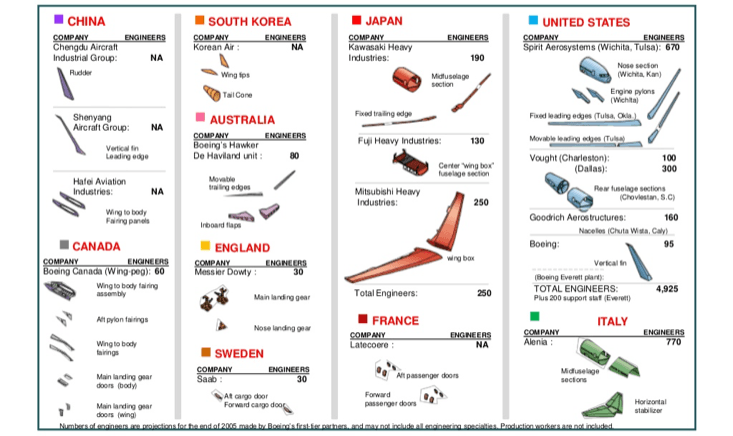 These proposed tariffs are equally concerning for sales. The Asian share of the global jet fleet was 17% in 1996, but is forecasted to be 37% in 2036.[7] These trade tariffs threatened against China could cause retaliatory action.  Any change to the tariff structure or NAFTA could have a ripple effect throughout this complex global system.  Finally, the administration’s reluctance to support the Export-Import bank would damage Boeing’s ability to sell planes worldwide.[ii] In its absence many airlines may turn to Airbus.[8] 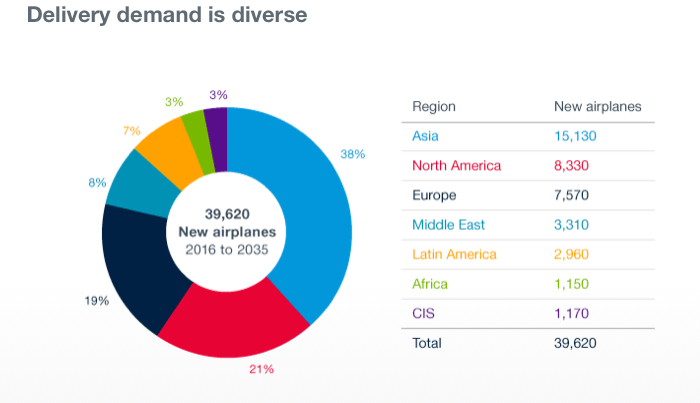 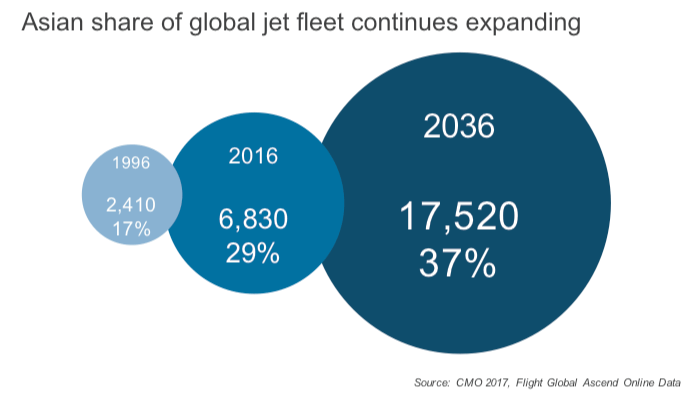 In the short term, Boeing has focused on their bottom line in an effort to offset some of the volatility associated with the supply chain and international market. Boeing cut 8% of the workforce in 2016 to reduce cost.[12] Boeing lobbied heavily for the support of the Export-Import bank, and was ultimately successful.[13] This is a major win as it enables the Chinese market, which is expected to require 7240 new planes through 2036, valued at approximately $1.1 trillion.[14]

Boeing has also used the isolationist policy to its advantage.  Boeing worked together with the administration to impose tariffs on the heavily government-subsidized Bombardier[iii] Cseries planes sold to Delta below cost.  The International Trade Administration[iv] imposed an 80% tariff and a 220% penalty for improper subsidies.[15] This quickly resulted in Airbus purchasing 50.01% of the Cseries program, with an intention to locate final assembly of the Cseries in the U.S. to circumvent the tariffs.

In order to derisk the global supply chain in the current isolationist environment, Boeing must continue to work with the administration to emphasize the importance of global trade to the U.S. economy, calm supplier concerns, vertically integrate where possible, and bring engineering expertise back in house.  In the development of the next airplane program, Boeing should adopt a strategy of removing any single critical point of failure within their supply chain.  This does not mean that all suppliers should be redundant, or that there would not be costs associated with the loss of any given supplier. The single largest risk on the 787 program in the current political climate is the loss of a Tier-1 supplier, who owns engineering and integration of sub-tier supplier parts.  If all engineering work at the plane level and subsystem level is brought back in house, and Boeing vertically integrates to the point of developing the subassemblies in house, they will be substantially less exposed to any volatility in their global supply chain.  If the entire global supply chain consists of sub-tier suppliers creating parts to a Boeing-developed specification, Boeing can relatively easily switch suppliers if a problem arises.  As an added benefit, final assembly has not been the most profitable segment for Boeing, so Boeing should become more profitable with a well-managed, vertically integrated approach.

[i] By dollar amount.

[iv] A branch of the U.S. Commerce department.

Adidas Speedfactory: Impossible is Nothing with Automation