2% of global carbon dioxide (CO2) emissions by human are from the aviation industry [1]. However, the high-altitude emissions would increase the chemical reactions, leading to actually two to four times larger impact than people expected [2]. On the other hand, the aviation industry has suffered from the climate change seriously [3]. For example, excessive rain causes serious damage to runways, and the increase of horizon inundates airports located along coastlines. While lots of flights are delayed or cancelled, airlines need to pay extra labor cost and logistics cost. Hence, to solve the climate change problem, launching climate friendly programs in the aviation industry is necessary.

China Airlines, one of the largest airlines in Taiwan, has tried hard to mitigate its negative impact on the climate change and become the leader in the local aviation industry. By identifying that more than 90% of airlines’ CO2 emissions is from jet fuel, China Airlines has taken a series of actions to reduce the impact from jet fuel, including the improvement of operational efficiency and the adoption of new technologies [4].

As the weight of a teabag actually increased the CO2 emissions for 1kg, a small change can result in huge impact [5]. Therefore, China Airlines emphasized on the decrease of airplanes’ total weight per flight. For example, China Airlines calculated the fuel needed per flight precisely and carried less fuel if available, especially for the take-off and landing stages consuming relatively more fuel than cruising at altitude [6]. Besides fuel loading, China Airlines also adjusted its food supply management. By changing food carts from 20.5kg to 17kg as well as replacing the original cutlery with a 7% lighter model, China Airlines was also to reduce around 150kg CO2 emissions per flight [7]. Furthermore, based on estimated data of the length of routes and boarding passengers, China Airlines developed an accurate water supply estimation system to reduce the unnecessary water loading on airplanes.

To increase the fuel efficiency, China Airlines has improved the maintenance system, fuel selection and flying techniques. By implementing a more comprehensive maintenance plan, maintenance staff cleaned aircraft engines more thoroughly and decreased airplanes’ internal resistance, leading to more than 0.5% reduction in fuel consumption. Moreover, China Airlines revised the guideline for flying to reduce fuel consumption. For example, better techniques of turning on or off the auxiliary power units in time as well as controlling the number of engines working during taxing time can help airplanes save fuels, leading to more than 300kg CO2 reduction.

In the meanwhile, China Airlines has invested in embracing the new technologies to reduce the CO2 emissions for years. For example, China Airline has replaced 2% of the traditional fuel with new biofuel, which is widely perceived as a more energy-efficient option with potential 50% of CO2 emissions reduction [8]. In addition, though China Airlines does not develop the airplanes, it has replaced old airplanes with more fuel-efficient models, leading to 5% to 20% reduction in fuel usage and an estimated 2 million USD saving per aircraft per year [9]. Besides applying new technologies into operation, China Airlines supported academic research to better understand the correlation between aviation industry and climate change. By adding the In-service Aircraft for Global Observing System (IAGOS) into airplanes, China Airlines is currently helping academic institutes to collect high-altitude gas samples and climate data to advance in related research [10]. 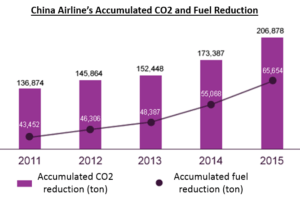 In the global climate change discussion, the aviation industry is relatively lagging behind. Though China Airlines has already stepped out to take actions, there is still a huge area for improvement waiting for the company. First of all, China Airlines can consider to implement the user-preferred route system, which calculates the most efficient route by taking real-time factors into consideration, including wind speed, temperature, turbulence, aircraft model and so on. The user-preferred route system is expected to reduce the actual flight distances by 5% and the fuel burn by 12% [11]. Secondly, China Airlines should involve more passengers to be part of the revolution. Besides the existing online check-in system, China Airlines can also incentivize passengers to reduce the weight of carry-on and baggage by providing price reduction or seat selection priority. Lastly, I would suggest China Airlines to collaborate with the Taiwanese government proactively to set relevant regulations like CO2 emission standards and user-preferred route system implementation rules. Going forward, China Airlines should collaborate with both consumers and governments more to innovate in the climate change field and achieve the environment-friendly goal together.

Changing the World One Building at a Time