Scotch whisky is Scotland’s largest export, contributing £4.0Bn to the country’s £27.5Bn (~15%) annual exports[1].  The primary ingredients in Scotch, which derives its name from Uisge beatha (“water of life”)[2], are water and barley; however, climate change trends are threatening not only the economic benefits of whisky, but also Scotland’s cultural heritage.  Global weather patterns are disrupting crop production and water cycles, both of which directly impact the production of whisky.  As the largest Scotch manufacturer with 36% market share[3], Diageo plays a leading role in ensuring sustainable whisky production; however, the company has recently come under scrutiny for its failures in championing sustainability and responsible business practices[4]. 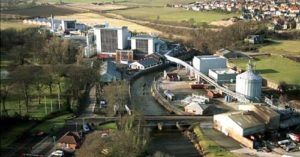 In 2013, Diageo’s Cameronbridge Distillery (Exhibit-1) emitted 134.2MM Kgs of carbon dioxide (“CO2”) into the atmosphere, leaving the facility as the 20th largest CO2 polluter in Scotland, mainly behind industrial manufacturing and energy companies like Scottish Power, which is Scotland’s largest emitter, releasing 7.4Bn Kgs of CO2[5].  That same year, however, William Grant & Sons (“Grants”), another whisky producer with 7% market share[6], released 184.2MM Kgs of CO2 at its Girvan distillery.   This difference is startling considering that Cameronbridge has an annual capacity of 100MM liters[7] and Girvan’s capacity is 110MM liters[8].  Given the vast quantities of CO2 ejected by energy and industrial manufacturing companies, one could argue that the likes of Diageo and Grants ought not to worry about their relatively small carbon footprints.  This viewpoint, however, is short-sighted.

Since 2013, Diageo has invested in improving its sustainability at its Cameronbridge facility.  The company made a £65MM investment in technology that now caters for 95% of Cameronbridge’s energy needs and which has made the distillery “the first distillery in the world to combine biomass combustion, anaerobic digestion and water recovery”[9].  The 2015 data shows vast declines at Diageo’s Cameronbridge distillery yet lackluster declines at Grants’ Girvan facility.  Diageo showed a ~40% decline in CO2 emissions and now ranks 26th with 81.0MM Kgs released.  Grants on the other hand has only reduced emissions by ~10%, but has increased in the rankings to the 14th largest polluter[10], despite support from Siemens on improving its sustainable practices[11].

Diageo has aligned itself with other organizations interested in climate change.  For example, the Scotch Whisky Association (“SWA”), a trade association that works to sustain Scotch’s role in global beverages, has also advocated for greater focus on environmental issues.  Recently, the SWA refreshed its Environmental Strategy (Exhibit-2), and although the SWA has no authority over the actions of Scotch manufacturers, the added presence of the trade body could help producers to strive to improve their sustainability practices.  Diageo is also a member of the Beverage Industry Environment Roundtable (BIER) which “works to reduce consumption, mitigate impacts and ensure sustainable continuity and future of the beverage sector.”[12]  Participating and collaborating with these entities will be helpful in enhancing environmental best practices at Diageo. 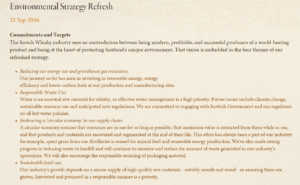 Diageo has continued to demonstrate its commitment to sustainability, with its recently completed Roseisle distillery generating ~50% of its overall energy need from onsite renewable sources[13].  Diageo is committed to improving its carbon footprint in Scotland, and has worked closely with the Scottish government and the Scottish Environmental Protection Agency to develop projects that reduce emissions[14].

Diageo’s public filings outline their global 2020 strategy for sustainability, which focuses on water stewardship, carbon, waste and sustainable packaging[15].  Diageo could go further in its efforts for sustainability and I would be interested to ask the company the following questions as they pertain to the production of Scotch: how can Diageo improve efficiency transporting raw materials to distilleries?  What efforts are Diageo making to cut energy usage during the production process?  Is unused water treated before being discharged into Scottish rivers?  What efforts are being made to use recycled paper for boxes and labeling?  The company clearly outlines its global vision, however, as Scotch is predominantly produced in Scotland, I would like to see more information about environmental efforts within Scotland.

The incentive for whisky producers to be bystanders in combating climate change is very high given the other polluters in Scotland (energy and industrial manufacturing) but diffusion of responsibility should come second to the sustainability of the system that gives Diageo the raw materials and allows them to manufacture in the first place.  As the market leader in the production and distribution of Scotch, Diageo needs to continue to lead by example, and to keep advocating for further environmental regulation in Scotland to ensure whisky continues to play a vital role in the Scottish economy for generations to come.

Carnival Corporation: A Company in “Conflict” while Cruising the C’s of Climate Change

Clear Skies Ahead for Boeing?