Strolling down Yawkey Way and passing through the turnstiles of Fenway Park to watch the Boston Red Sox is a special experience for any baseball fan. Few, however, pause to consider the impact climate change has – and will have – on the “old ball game,” and whether climate change may strike Major League Baseball (“MLB”) out.

Including spring training and the playoffs, the MLB season typically lasts from February through October [1]. Consequently, the season includes the warmest months of the year – June, July, and August. Elliott Negin of The Huffington Post, noticing that the number of summer heat waves has been increasing, rightly points out that excessive heat puts both players and fans at risk, yet thus far, there has been no definitive decrease in ballpark attendance, possibly because MLB teams have made efforts to protect both players and fans from excessive heat [2]. However, as extreme heat waves become increasingly common, will it impact attendance in future years? If fans opt to stay home and escape the heat, ticket and concession revenues will decline.

MLB is also threatened by rising sea levels. According to NASA, projections from the Intergovernmental Panel on Climate Change suggest that sea levels will rise by up to 6.6 feet by 2100 [3]. If this happens, stadiums located in coastal cities will be at risk of being consumed by the sea. For example, artist Nikolay Lamm, using sea level rise maps from Climate Central, illustrated the effect of just a 5-foot rise in sea level on San Francisco’s AT&T Park in Figure 1 (via Business Insider). 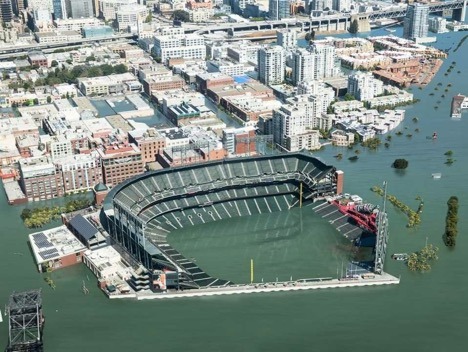 Some of the core equipment players use is also at risk. According to Matt Markey of the Tribune Business News, 60% of all MLB players use Louisville Slugger bats manufactured from ash trees grown along the New York-Pennsylvania border. Alarmingly, Markey writes, that ash forest is in danger of being completely decimated by the emerald ash borer, an insect that methodically kills ash trees [5]. The borer’s spread into the region has been hastened by climate change-induced drought, which has weakened the ash trees, and a declining number of extreme-cold days in recent years [6].

MLB and many of its individual franchises have been working towards reducing their impact on the environment, however. For instance, the Minnesota Twins opened Target Field in 2010 and established a groundbreaking irrigation system that captures, conserves, and reuses rain water, thereby reducing the ballpark’s city water needs by 50% [7]. Target Field was also the first ballpark to achieve both LEED Silver certification both for new construction and for operation and maintenance [8]. Even 104-year-old Fenway Park has seen green improvements; in 2008, Fenway became the first ballpark in MLB to install solar thermal panels to heat the stadium’s water, saving 18 tons of carbon dioxide each year [9].

Despite the positive initiatives, however, there is plenty of room for MLB to improve. For example, air travel is an important component of MLB that contributes to climate change. Of the 30 MLB teams, 24 are located in unique metropolitan areas. (New York, the greater Los Angeles area, and the San Francisco/Oakland area are all home to two teams [10].) Over a standard 162-game schedule, this means that teams must travel a lot, usually via air. According to the Federal Aviation Administration (FAA), aircraft engines produce various greenhouse gasses, including carbon dioxide, nitrogen oxides, and even water (when given off at altitude), and ground operations at airports belch further carbon dioxide and other greenhouse gases [11]. Clearly, then, the amount of travel required of teams contributes negatively to climate change. Although there is no ready-made, easy solution to the travel requirements in baseball, the travel could be reduced by decreasing the number of games in the season, which would help reduce the number of flights each team would be required to take.

In addition, the majority of MLB games are currently played at night [12]. Despite energy efficiency improvements, it still requires electricity to illuminate the playing field, the concourse areas, and the grandiose scoreboards in each stadium. Even with advancements in renewable energy, 33% of the electricity in the United States is still generated from burning coal, which gives off greenhouse gasses, while only 13% is generated from renewable sources [13]. A solution to this could be playing more games during daylight hours to reduce the amount of electricity needed to run the lights in the stadium, and teams (or the league itself) could further invest in sources of renewable energy.

The battle MLB fights against climate change is like Clayton Kershaw, the best pitcher in baseball, facing off against Mike Trout, baseball’s best hitter, with the game on the line. Will Kershaw strike out Trout, or will Trout hit a game-winning home run?

[4] Business Insider, “What will America Look Like Under 25 Feet of Seawater, Part 2,” http://www.businessinsider.com/illustrations-of-what-america-will-look-like-if-sea-level-rises-2013-7, accessed November 2016.

More Plastic Than Fish in the Sea? A Big Problem for Pack2Go

Sustainability at H&M: Cleaning Up Its Act