Chai! Or tea as it is commonly known across the world, an inheritance from the British when colonial rule ended in the late 1940’s, is a staple drink in India. It is omnipresent; prepared at home, offices and the numerous tea stalls at street corners. India is one of the largest producers of tea in the world, second only to China. The country recorded the highest ever tea production in 2015-16 at 1,233 million kilograms, of which a walloping 80% was consumed within the country1.

Tata Global Beverages (TGB), an India based global natural consumer beverage company, is one of the largest producers of tea. Tea plantations are heavily dependent on the monsoon season (June-August in India) as they require 150-250 cm of water on average2. Most of the company’s tea estates are in the states of Assam (north-east) and Kerala (south-west), where climatic conditions favor growth of tea. 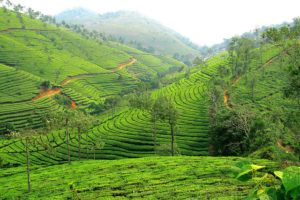 Global warming has the potential of disrupting rainfall in these parts of the country. Consequently, TGB faces a significant threat of low yield and reduced production.

Erratic weather conditions alter the amount of rainfall a tea plantation receives. Since tea is a moisture heavy crop, dry periods can lead to a complete wipe out of that year’s crop. Conversely, periods of very heavy rainfall can lead to water stagnation which is equally detrimental to tea plantations. In this way, changing rainfall patters can significantly reduce TGB’s ability to continue producing at historical rates. Being a large player in the tea industry, production shortfalls can curtail supply and lead to an increase in prices. Other large tea producers across the world face similar consequences with changing weather patterns.

A simulation, considering production in India and Srilanka, was conducted to predict the impact of climate change on tea production and prices. The results showed that between 2012 and 2022, production on average will decline by 3.4% and global tea prices will increase by over 26%3.

Increased frequency of pest attacks due to climate change is another threat TBG faces. Tea pests such as Red Spider Mites, Tea Mosquito Bug etc can destroy large plantations in short periods4. A higher number of such attacks would once again lower yield and production.

What has TGB done so far?

The company is working on several different fronts to study and combat such risks of climate change on its business.

While sustainable irrigation practices are important, TGB should consider rainwater harvesting as an important measure to prevent a drought from destroying an entire tea crop. Water can be stored for a long period in underground water tanks or natural reservoirs at the base of mountains, to be used when the monsoons fail. Perhaps, TGB can consider scaling this across all their plantations in India and abroad to respond to fluctuations in rainfall.

Moreover, TGB may also do well to invest heavily in developing varieties of tea which can tolerate extreme conditions such as those induced by global warming. For instance, Dr. Barman from the Tocklai Tea Research Association in Assam, has used plant physiology to clone tea varieties. His research has produced cactus-like tea plants, which can withstand extreme drought6. If trials prove to be successful, this can revolutionize the tea industry; and since this this isn’t a GMO version, it would be more acceptable to the public.

TGB seems to be heading in the right direction in safeguarding itself for the future. Though only time will validate this; combating the dangers of climate change isn’t everyone’s cup of tea!

The National Flood Insurance Program: Do the Math

Student comments on Climate Change and the Tea Industry