Alstom is a leader in equipment and systems for the railway sector [1]. Creator of the world famous French high speed train TGV, the company recorded over €6.9 billion in sales in 2015 [2].

The transport sector consumes about 28% of the global energy consumption and its contribution to CO2 emissions has increased incrementally in the past decades to 23.4% of the global emissions [3][4]. In a context where the world population continues to grow and globalization accelerates, developing sustainable ways of transportation is one of the major challenges faced by humanity. As Alstom’s high speed trains offer a proven solution to the above challenge, the company could benefit from climate change, especially in underserved markets such as North America. 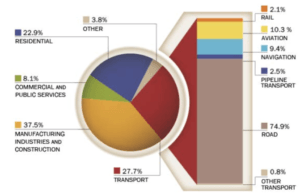 The Future of transportation – an opportunity for Alstom.

Rail transport represents 6.4% of the global transportation modal worldwide but less than 1% of CO2 emissions [3][4].

Due to the electric propulsion technology, the rail is now seen as the greenest mode of transportation, in that aspect exhibiting a competitive advantage over road, navigation, and aviation. With climate change concerns on the rise and decreasing oil reserves, the geo-political environment is encouraging development of sustainable transportation projects independent of fossil energy. With such geo-political initiatives and an environmentally aware general public, local governments increasingly express interest in sustainable transportation development [5][6]. In the light of climate change, Alstom can capitalize on the forthcoming changes facing the transportation industry.

An opportunity as a market leader.

Alstom introduced its first version of the TGV in 1981 [7]. Compared with the Japanese Shinkansen, the TGV can operate on conventional tracks, providing significant cost savings to nations that wish to update their railway system rather than develop a brand new network [7]. Additionally, the last version of the TVG holds the speed record as the fastest wheeled train (358 mph) and can be operated at speeds of up 223 mph in total safety [7][8]. While the top speed (without passengers) of the TGV is 17 mph slower than its Japanese competitor, the TGV can operate safely (with passengers) 23 mph faster. On the energy efficiency side, the estimated annual CO2 emissions for the TGV is 42% lower than its Japanese counterpart [8]. Alstom’s product offers the most economic high speed train technology in terms of necessary capital investment and energy consumption and is therefore well positioned to take full advantage of the global swift towards rail transportation due to climate change. 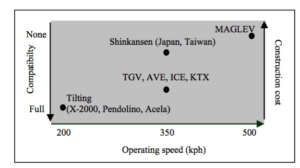 Since its invention in the 1960’s, high speed trains have been praised for having many benefits, though the deployment of this revolutionary technology has been limited to a few countries in Europe and Asia that all happened to be producers of such technologies. In fact, exporting high speed trains proved to be very challenging due to the lack of long-term commitment of governments. Indeed, high speed trains generally requires not only high initial investment but also long term planning from governments. This has proved to be very difficult in western democracies like the United States where government involvement in public service is traditionally sparse and further complicated by the fact that infrastructure planning may change each election cycle, and federal initiatives may need approval from local legislators at state, county, and township levels [10]. Despite the advantages of the high speed trains and its proven necessity on both coasts of the United States [5], the political disagreements have prevented its implementation, but this is changing rapidly. Although no high speed trains are currently operating, the current US administration, along with both presidential candidates [9], committed billions of dollars to building high speed trains to link major cities [10]. 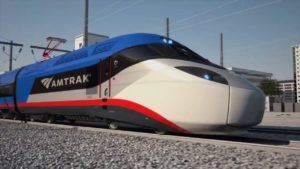 A future full of success

With the American public awareness of global warming at an all-time high, Alstom offers an already proven solution to decrease the country ecological footprint. Recent success seems to demonstrate that the company strategy is working as Alstom signed in 2016 a $2.4 Billion contract with Amtrak to bring high speed trains on the east coast of the United States [11]. This is a very competitive market and the current technology does not allow the trains to be carbon neutral. Alstom should seek to maintain its leadership in sustainability and continue to invest until it manages to produce carbon neutral high speed trains [6].

[8] Kevin Scott, “How Big Are the Environmental Benefits of High-Speed Rail? A Cost-Benefit Analysis of
High-Speed Rail replacing automobile travel in the Georgetown-San Antonio corridor”, Page 46, https://digital.library.txstate.edu/bitstream/handle/10877/3531/fulltext.pdf?sequence=1, accessed in November 2016.

Allianz: Insuring Both Sustainability and Resilience

6 thoughts on “Climate change, an opportunity for high-speed train manufacturers.”