In our parents’ and grandparents’ generations, the essentials were food, clothing, and shelter – or in Hindi, “roti, kapda, aur makan.” Today, we add a fourth: the mobile phone.

Mobile phones, and with them, the ability constantly communicate with the world, have experienced explosive growth. As of January 2016 there are over 7 billion mobile connections in the world, of which 1 billion are in India.1,2 Yet constant information sharing does not come without cost. In 2008, The Climate Group and McKinsey released a study that found the ICT sector’s emissions currently comprise 2-2.5% of total global GHG emissions and are expected to nearly triple by 2020.3 The good news is that by increasing energy efficiency and enabling efficiency in other sectors, the ICT sector has the potential to deliver carbon savings equal to five times this amount by 2020.

Addressing operational cost: reducing dependence on GHGs. Over 80% of an average mobile operator’s energy usage is derived from operating the network.5 As usage rises, cost and source of energy are a major concerns for the continuity of the business.

Airtel has developed several approaches to reduce its network infrastructure’s energy usage. First, it has converted thousands of sites from indoor to outdoor, eliminating the need for constant cooling, and lowering energy consumption by ~25%. The company also piloted micro-cooling and cold aisle containment systems that reduce the need for air-conditioning even in indoor sites.

In 2013-14, Airtel achieved a 20% annual reduction in CO2 emissions per terabyte of data in its network infrastructure, the third year in a row of 20% reduction.4,6 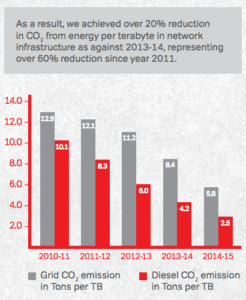 Ensuring business continuity: building flexibility into infrastructure. Extreme climate events increasingly pose business risk to Airtel, whose operations depend entirely on their network systems’ abilities to maintain continuity. During floods in Kashmir, Airtel’s networks were disrupted due to a lack of contingency systems. They worked with industry body COAI (Cellular Operators Association of India) to develop a plan to share tower infrastructure with competitor mobile networks. A highly unusual agreement across global markets, it has now expanded to include most of India’s mobile networks and enables the entire system to function more reliably in the face of potential adverse events.7,8

Supporting user capacity: providing services that enable adaptation. Both gradual degradation of environments and increased extreme weather events have the potential to disrupt consumer usage of and ability to pay for Airtel services, a critical risk for the firm.

In terms of environmental degradation, nearly 50% of India’s population works in agriculture and over 40% of Airtel mobile subscribers are rural.4,8 Airtel’s ISKL initiative, a JV with the world’s largest fertilizer cooperative, IFFCO, provides farmers with information on weather forecasting, commodity prices, agronomy, dairy farming, and forestry to help them make timely decisions at a fraction of traditional cost, mitigating against the risk of crop and financial ruin.

In the event of an acute climate shock, consumers may not have access to cash to purchase talktime. Airtel Money partnered with Kotak Mahindra Bank to extend mobile credit in times of need. In a crisis, mobile alerts can also help save lives by sharing real-time information. With the Government of Odisha, Airtel added 200,000 fishermen to the network to provide lifesaving alerts during cyclones, floods, and other events.4, 6 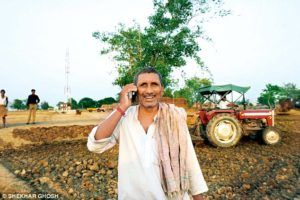 Looking forward. By 2018, Airtel aims to reduce CO2 emissions from network infrastructure by 70% per unit while increasing broadband coverage.4  First, Airtel should design incentivizes to identify radical innovations in network infrastructure. As rural systems become increasingly sparse and urban systems increasingly dense, the traditional tower model may no longer be effective. Second, data sharing and analytics is still limited. Each provider seeks to maintain control over their own proprietary information. However, additional efficiency and cost savings may be realized by sharing data that could help providers detect and respond to gradual shifts in climate or acute weather events. Helping to establish a ‘public good’ information sharing system through the industry could be a next step for Airtel as the market leader.

As population and incomes rise, the tension between access and environmental impact increases. Addressing this tension will require innovation beyond the company’s existing efforts. Is it possible to balance the opposing goals of increasing access to technology while reducing global emissions? (Word count: 798)

Student comments on Climate Calling! Airtel India and ICT in the Age of Global Warming