The year was 2006. Oil prices had increased by approximately 400% since 1998, and Goldman Sachs was calling for a steady state oil price of $200 per barrel.[1] Al Gore had just released An Inconvenient Truth, and George Bush just recently passed the Energy Policy Act of 2005, giving billions of dollars to renewable energy companies.[2] Headlines read Green is Good [3] and The Smart Money is Going on ‘Clean’ Technologies.[4] Clearly it was the dawn of a new energy era, and investors were chomping at the bit to be the first movers in this sector, where government subsidies and cash infusions were sure to keep companies growing.[5]

Limited Partners (L.P.s), such as University Endowments, Philanthropic Institutions, Pension Funds, and Fund-of-Funds were eager to allocate large portions of their venture capital portfolios to clean tech funds (G.P.s). Between 2004 and 2012 they invested approximately $25 billion into clean tech strategies. One of the largest and most vocal proponents of clean tech funds, Khosla Ventures II, raised $200 million in 2006 from investors. Vinod Khosla, the founder, publicly stated that he was “thinking outside the barrel”[7] by investing 40% of the fund in alternative energy technologies.[8] Some funds allocated even greater percentages of their portfolios to clean tech. John Doerr from Kleiner Perkins announced that he thought “Green technologies…is bigger than the Internet.”[9]

In 2009 President Obama passed the American Recovery and Reinvestment Act, which encouraged spending of up to $100 billion into clean tech companies. Despite the wider macroeconomic downturn, these new regulations made clear that the clean tech industry was going to be aided by a massive cash infusion, and investors continued to be optimistic. Clean teach fund investments reached $9.6 billion in 2009, almost double the amount raised in 2008. Khosla Ventures III raised $1 billion dollars, the majority of which would go towards clean tech investments. [10] 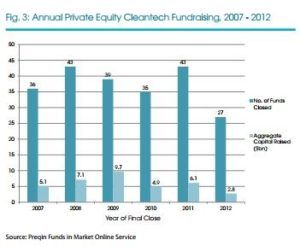 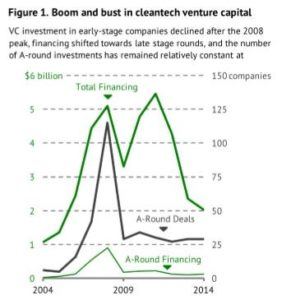 Unfortunately, the hype surrounding climate change and new regulations were not enough to counteract the inherent difficulties that made clean tech a bad sector for venture capital investments; clean tech investments required high upfront costs, developed hardware slowly, faced execution and manufacturing challenges, were exposed to highly volatile energy markets, and produced returns only after a long period of time. In 2016, after nearly a decade and over $25 billion invested by L.P.’s,[11] 90% of clean tech investments can be considered abject failures, and close to 100% can be considered poor investments.[12] The colossal and widespread failures of clean tech venture investments had numerous negative consequences: not just to the Limited Partners who lost tens of billions of dollars, but also the investors who bet their careers on clean tech venture capital. 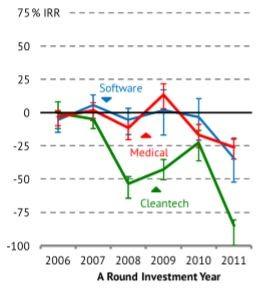 (A Round investment returns by year, relative to Medical and Software sectors from same vintage years, Gaddy et. al)

The governmental regulations that were instituted to address climate change spurred a venture capital bubble in clean tech investments which financially impacted not just a number of Limited Partners and their causes, but also a wide variety of Venture Capital Funds. Khosla Ventures II and Khosla Ventures III had dismal returns, at less than 5% IRR as of March, 2016.[13] This track record reduced their credibility and made their future fundraising efforts much more difficult. Although Khosla Ventures is still alive today, many other smaller clean tech funds went out of business completely.[14]

Perhaps the greatest negative ramification of all, beyond the capital losses at the L.P. and G.P. levels, is that dozens upon dozens of clean tech companies were over-capitalized, over-extended, and ultimately bankrupted. Of the 150 clean tech companies founded in Silicon Valley over the last 10 years, almost all of them have floundered and failed.[15][16] Evergreen, EPV, Solyndra, Spectrawatt, Sterling Energy- the list goes on. What is even more concerning is that now technology has progressed to the point where alternative energy solutions may be extremely compelling economically, yet the L.P. and G.P. community will not invest in clean tech for the foreseeable future due to the extremely poor track record. Heading into 2016, clean tech companies that are good investments may now fail because they struggle to receive financing.

Even when politicians agree on spending measures to encourage innovation and combat global warming, these regulatory changes can lead to market distortions as we saw in the venture capital industry from 2004-2016. Going forward we must attempt to carefully consider how new regulations may affect capital market investors, and the long-term trade offs between the value we gain from incentivizing markets to behave in a certain manner, and the potential long-term negative ramifications these market distortions may cause.

Student comments on Clean Tech VC: A Decade of Failure