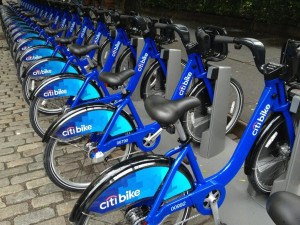 Launched in May 2013, Citi Bike promises customers a low-cost, environmentally-friendly transportation alternative in New York City.  In additional to the functional benefit offered to users on short trips, the bike share system improves physical fitness, reduces car pollution, and provides the city with a greener image.

As opposed to publicly funded bike share programs in Boston, Chicago, and Washington, Citi Bike is owned and operated by a for-profit business.  Due to its private funding, station location and expansion plans are under the business’ control.  However, the company must maintain relationships with city officials in order to source real estate for its docking stations.

“The business model is still under development. Some of it is trial and error.” – Susan Shaheen, a researcher of bike-share programs at the University of California, Berkeley [5]

Revenues derived from sponsorships and user fees have not been able to support operating expenses: 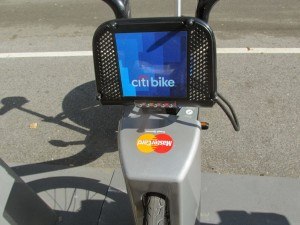 Sponsorships/Advertisements – In May 2012, Citi Bank was announced as the title sponsor, agreeing to pay $41 million over five years.  Concurrently, MasterCard became the Preferred Payment Partner, spending $6.5 million in order to place its logo on each dock.  However, finding additional sponsors and advertising revenue has proven challenging, as the program has become synonymous with its lead sponsor.  Citi Bike’s strong brand affiliation has dissuaded other companies from partnering with the system due to low anticipated return on investment.

After paying the fee, users can take an unlimited number of rides as long as each ride is shorter than the permitted limit.  Penalty fees are applied for trips that extend beyond the permitted limit.  If a docking station is full, users are provided with extra time to find another available dock. 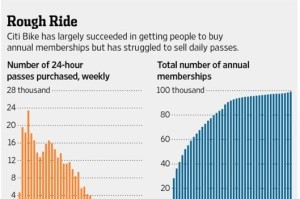 While the company originally forecasted that the program would be popular with short-term users like tourists and visitors, actual usage has been disappointing in these cohorts.  Since usage among annual members has been higher than anticipated, the company has been plagued by a revenue deficit on a per ride basis and higher than anticipated wear and tear on bikes.  By early 2014, with losses mounting, the company needed to raise of tens of millions of dollars to continue operations.  A new management team and operator, Motivate Co., has been brought in to attempt to turn around the company.  As a result, the cost of an annual pass increased ~50% to $145 in 2014 and yet again to $149 in 2015. [4]

“The only macro trend is chaos. The industry is kind of a mess.” Ryan Rzepecki, chief executive of Social Bicycles Inc., which supplies bikes and other equipment to bike share programs [5]

Citi Bike’s two main operational issues stem from maintaining and rebalancing its fleet.  Users expect to be able to rent and return well-functioning bikes at their desired locations.

Maintenance:  If a bike is not working properly, users lock it back at a station and notify maintenance by pushing a button on the dock.  However, the number of cracked seats, worn tires, and faulty stations overwhelmed the operations team.  An audit conducted in December 2014 by New York City Comptroller, Scott Stringer, found numerous deficiencies, among which were:

Credit card and communication issues were particularly worrisome, because they impeded short-term, high revenue customers.  However, progress has been made.  Early in 2015, a manager was hired to maximize shop throughput, manage bicycle part inventory levels, and institute quality control procedures in the maintenance department.  As a result, many maintenance metrics have improved, with 99.87% of bicycles receiving a maintenance check once per month and 94.83% of station defects being resolved within 48 hours [6, 7]. 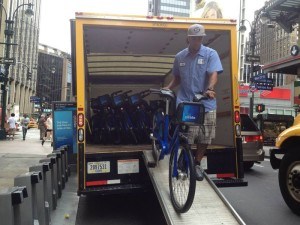 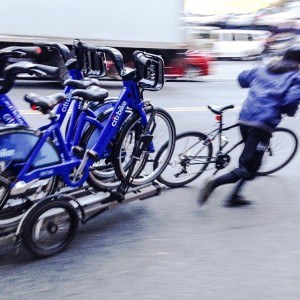 Originally, the company was plagued by a lack of data and the inability to accurately forecast demand.  Ideally, stations would be self-balancing, where the net inflow and outflow of bicycles is zero.  However, demand surges during the morning and evening rush-hours leave some stations full and some empty.  The system was intended to be rebalanced by trucks, but traffic congestion has made the process far less efficient.  A focus on optimizing overnight truck rebalancing routes has been employed, and a pilot rebalancing system using bicycles with trailers hopes to avoid traffic issues during the day.  Years of historical data and increased analysis have also allowed for more efficient rebalancing. [1]

PEDALING INTO THE FUTURE:

Despite past misalignment of business and operating models, Citi Bike’s popularity remains high and customers generally seem pleased by the level of service.  In September 2015, riders took 1.3 million trips and traveled 2.5 million miles [7].  The new management team, including former MTA Head Jay Walder, has helped the company expand operations in Brooklyn and the Upper East and West Sides, with the goal of doubling the number of bikes to 12,000.

Going forward, the company will need to pursue innovative sponsorships to supplement membership fees.  For example, a Long Island City landlord recently entered into a 5-year, $100,000 contract in order to cover the installation of a docking station in front of his building [3].  Creative marketing campaigns, such as the current “refer-a-friend” program, will be also be needed to grow user fees as the system expands.  Additionally, one potentially untapped resource is the mountain of data the company collects on its users.  Finding a way to monetize customer data would certainly help the bottom line.

In many ways, Citi Bike has been a victim of its own success.  Its operations were initially strained by heavier than anticipated usage but have since improved.  Though user fees have increased, it remains unclear if the business is profitable due to a lack of financial reporting.

Further tweaks to the business model should allow Motivate to capture more value in the future.  For now, New Yorkers are simply enjoying the ride.

Student comments on Citi Bike – Potholes instead of Profits