This post will analyze the response of Chubb Limited (NYSE: CB) to worsening damages caused by wildfires, a subset of the broader climate change megatrend. Chubb is a leading property casualty insurer, with products ranging from personal lines (e.g., home insurance) to commercial lines (e.g., workers’ compensation), and in 2016 had gross written premiums of $35 billion[1].

Why worsening fires are an issue for Chubb’s management team

Insurers have always had to manage risk of wildfires, but in recent decades climate change has exacerbated the issue. As the graph[2] below shows, an increasing level of acreage has been burned by wildfires over time. 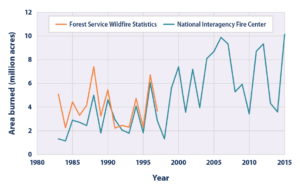 Research has suggested that an area equivalent in size to the states of Massachusetts and Connecticut combined has been burned due to human driven climate change[3]. The economic cost associated with the fires is enormous (the October 2017 California fires alone are estimated to have caused $85 billion in damages[4]), and property insurers like Chubb are heavily exposed. For example, The Travelers Cos, Inc., a primary competitor of Chubb’s, announced losses of $525 to $675 million (pre-tax) related to the California fires.[5]

What Chubb’s management team is doing to address the issue

As an underwriter, Chubb “assess[es], assume[s] and manage[s] risk with insight and discipline.”[6] The individual pays a known cost (premium) in exchange for handing off an unknown, possible cost. The ensuing value chain is as such:

Chubb manages this side of the equation through underwriting selection (picking the right risks) and price (estimating the risk of the aggregate pool and setting insurance premiums appropriately). But insurers also serve as risk managers, particularly in commercial lines (e.g., sending risk control engineers to mitigate future losses by removing things like hazardous chemicals). The coordination of this latter function, in combination with the payment of claims to customers, forms the insurance supply chain. While largely intangible, this supply chain comprises the deployment of capital from the capital markets to an individual to indemnify loss, and the deployment of risk management services to prevent loss:

In response to the growing threat from wildfires, Chubb and other insurers innovated by introducing loss prevention into the personal lines space. Specifically, the company contracted with private firefighting services to defend its insureds’ homes. The company has engaged in this practice since 2008, and Chubb EVP Paul Krump says enrollment in the services has been “growing leaps and bounds.”[7] Private firefighters are deployed to at-risk homes to perform preventative services such as clearing debris, applying fire retardants, and extinguishing brush fires as they occur on the property. Chubb coordinates the delivery of this service via local “command” centers that partner with the California Department of Forest and Fire Services. The service is free to wealthy clients who enroll.7 This innovation represents a step towards a “vertical integration” of Chubb’s supply chain, in that it transforms an implicit loss control service (reliance on local public fire departments) into an explicit offering that is coordinated by the insurer itself. By rethinking its personal lines supply chain, Chubb lowers its exposure to the worsening fires.

There are only so many levers Chubb’s management team can pull (reducing exposure to high-risk areas, increasing prices), and they are undoubtedly using all of them. Regarding the use of private firefighters, there are a few additional steps to consider. The first would be to “complete” the move towards vertical integration by bringing the service fully in house. Should the wildfire trend continue to worsen, it is reasonable to conclude that more insurers will attempt to use the private contractors. There is an interesting parallel here to claims service in the aftermath of a hurricane – demand for 3rd party claims adjusters skyrockets as insurers race to reach their clients, and the reliability of the service thereby worsens during the surge. A rival insurer, Travelers, innovated post-Katrina by bringing its catastrophe claims service fully in-house, cross-training its existing claims adjusters to respond to hurricanes.[8] This enables faster and more reliable time-to-customer. Given that the firefighters will only ever be in demand during “surge times,” this could be a logical action for Chubb to take. A corollary to this step would be to continue to invest in risk modelling and geospatial analytics to better identify at risk homes in real time and to integrate that intelligence into the deployment of the firefighters.

A second angle for Chubb to consider is to combat the root cause of the problem itself, climate change. Chubb is in a unique position to be an advocate here because it has a front-row seat to the costs associated with a changing climate.

A key question raised by this article is the “fairness” of this service. As the economics are likely only favorable for the insurer to provide the service to high net worth clients, it effectively creates a “two-tier” system.[9]

Will the New Electronic Tags Eliminate Food Waste in Japan?

Student comments on Chubb: Rethinking the Insurance Supply Chain in Response to Wildfires