With temperatures rising globally, this image could prove to be all too common soon. Scientists believe that the emission of greenhouse gases, such as from the burning of fossil fuels, is leading to global warming. According to the EPA, average global temperatures could increase up to +8.6°F by 2100, with a likely increase of at least +2.7°F [1]. In addition to rising temperatures, climate change has also had a negative effect on precipitation and storm events. Overtime throughout most of the United States, a higher proportion of precipitation is predicted to fall as rain rather than snow, with cold-season storms projected to continue moving further northward [1]. Since 1972, the length of time that snow covers the ground has shortened by two weeks, while the depth of snow on the ground (snowpack) has reduced an average of 23% since 1952 [2].

For Vail Resorts, a $1.6Bn revenue-generating public company that owns and operates a portfolio of premier mountain resorts, including Vail, Beaver Creek, Breckenridge, Park City, and Whistler Blackcomb, climate change could represent a major threat to its business. The rising temperatures and diminished snowfall patterns can create significant challenges for the operation of winter activities by potentially shortening the number of available ski days as well as the quality of the experience each season. With less visitors to the ski mountain, not only would on-mountain lift ticket and equipment revenue decrease, but the ancillary lodging and retail businesses associated with the mountain would also suffer.

In an effort to combat climate change, Vail Resorts has been a leader in environmental initiatives among the travel industry. In 2006, it became the second largest U.S. corporate purchaser of wind power, offsetting 100% of its energy use [3]. Additionally, Vail Resorts created EpicPromise, a sustainability program aimed at reducing impact through resource conservation, protecting forest health and watersheds, and developing local communities through nonprofits [4].

The Company has focused a large part of its sustainability efforts to date on reducing energy consumption. In 2008, Vail Resorts pledged to reduce its consumption by 10% in 2012, referred to as the “Target 10” goal. Vail Resorts achieved this in 2011 and further committed to reducing energy consumption by another 10% before 2020 through “The Next Ten” campaign [5]. Consumption reduction has been targeted in five main areas, including snowmaking, facilities, grooming and lifts, and food and beverage, and the Company announced that its efforts have saved enough energy to power 2,600+ households for one year [5].

Through the implementation of new technologies, Vail Resorts has coupled its goal to reduce energy consumption with its need to create better snow more quickly given the anticipated reduction of snowfall/snowpack resulting from climate change. The Company invested in GPS tracking technology (Exhibit 1) for its snowcat grooming fleet thereby reducing idle time, improving efficiency, and grooming more acres for every gallon of diesel used [6]. These improvements help align incentives by allowing Vail Resorts to open more runs and to keep them in better condition for the guests while also reducing energy consumption. Additionally, the Company has replaced series of smaller, less efficient compressors with one high-powered compressor on a few of their mountains, creating more snow with less energy, while also creating a more positive experience for guests since better snow can be made more quickly in periods of low snowfall [5]. 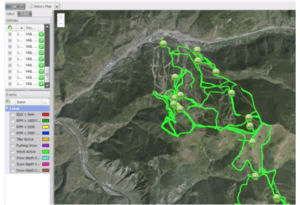 In addition to continuing to invest in its own sustainability initiative, Vail Resorts can continue to respond to the threat of climate change by diversifying its risk both geographically and by seasonal offerings. The Company recently announced its acquisition of Whistler Blackcomb [7], which will allow it to expand into Canada and potentially diversify weather/snowfall risk during the winter season. With the implementation of the EpicPass program, the Company’s ski resorts are linked under one pricing mechanism so that guests can visit any of the participating resorts, which also aids in reducing risk at any one particular location. Vail Resorts has also focused a significant amount of resources in building out offerings to attract business during the non-winter months to better distribute revenue earnings throughout the year, such as mountain biking, hiking and family-oriented adventure centers.

Beyond these measures, Vail Resorts could participate in more advocacy programs, such as with the nonprofit, Protect our Winters, to help draw attention to the issue and to advocate for more state and federal climate change legislation. Additionally, as the Company continues to expand, it can work to ensure that any additional construction on lodging or retail spaces, or on the creation of additional ski runs, is carried out in an environmentally conscious way.

‘The Power in Poop’ or ‘A Dirty Source for Clean Energy’